The onslaught is about to begin. UPS and the USPS will arrive at the office with cards and cakes and calendars. And while you may have loved those chocolate-dipped pretzels from last year, do you remember who sent them? Did that gift help you better understand your vendor and their mission? Unless you were partnering with a pretzel-maker, the answer is probably not.

“You are not going for simply ‘thanks for being a customer/client’ but to create a lasting brand impression,” cautions M.P. Mueller, president of Austin, Texas-based advertising firm Door Number 3.

Mueller, who has helped her firm send Door Number 3 custom branded wine and other gifts in the past, says that corporate holiday gift-giving is an opportunity, and it ought not be wasted on a generic tin of popcorn, no matter how delicious. Most firms start brainstorming and planning their corporate gifts in late October, but as is the case with personal gift-giving, there’s often some last-minute panic.

Look at images from five other businesses who took the reindeer reins and made hay at the holidays.

Does your company have a fantastic, creative branded gift you'll be sending this year? Or some other way to thank clients and wish them a happy holiday? Tell us more at llacina@entrepreneur.com 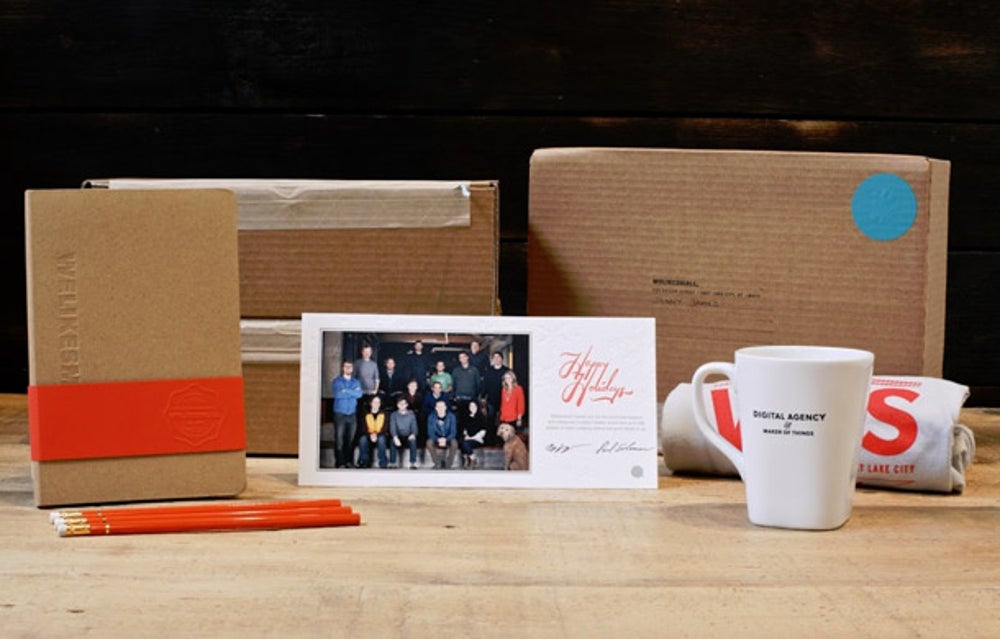 We Like Small, a Salt Lake City, Utah-based digital agency, embraced the fun making make physical objects for a change with its branded kit of items clients can actually use, including a journal, t-shirt and a coffee cup.

“Honestly, we really hate swag but wanted to put together a nice identity swag set as much for ourselves as everyone else,” says Executive Creative Director Mike Kern. The team spent about $50 on each kit (plus time finding just the right elements), and sent it to about 75 key clients. 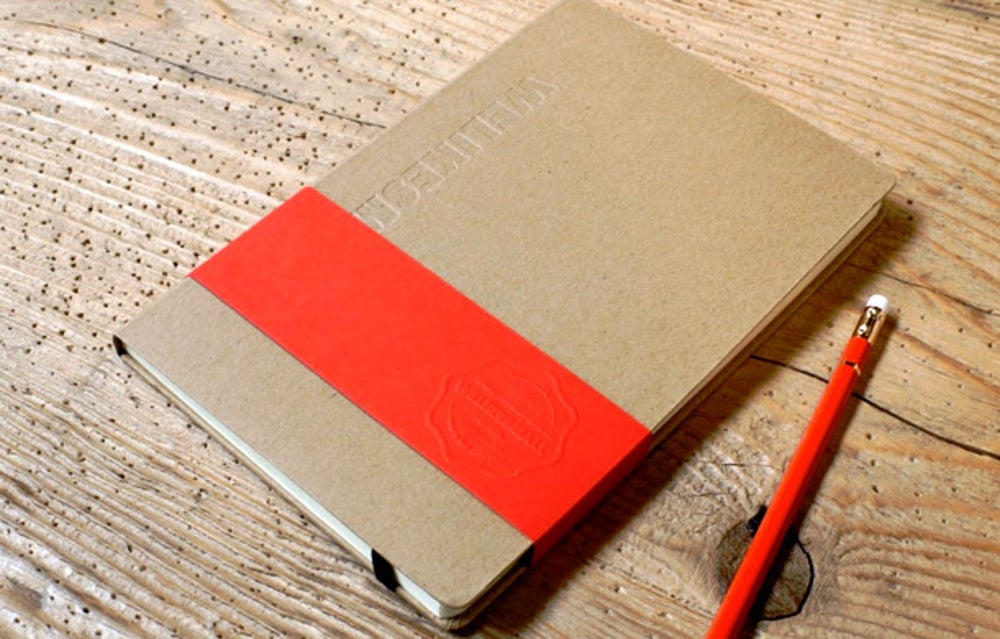 A close up of the branded notebook clients received as part of last year's gift pack from We Like Small. 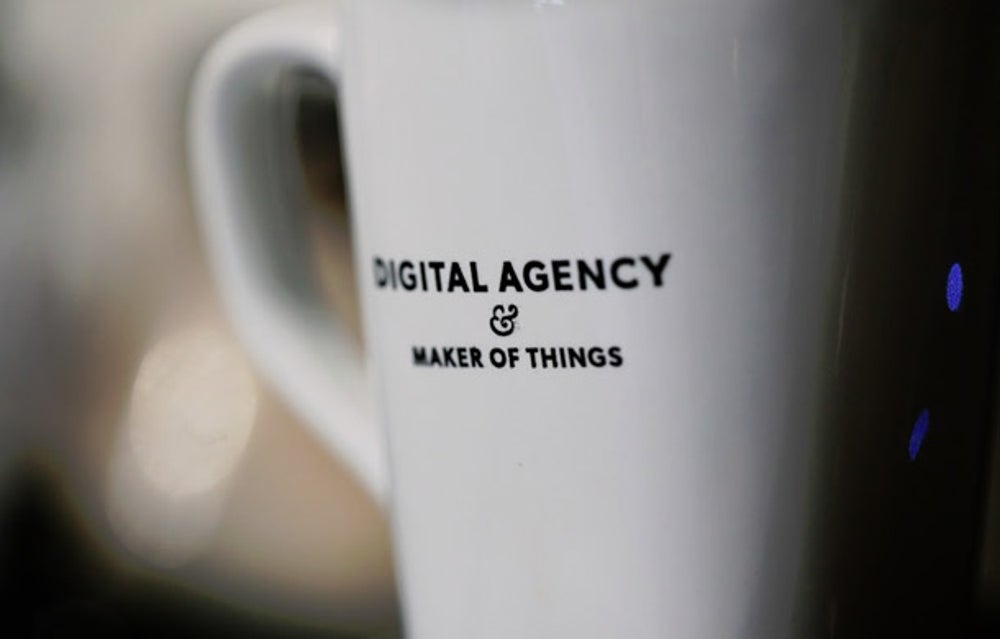 The branded mug that clients received from We Like Small last winter. 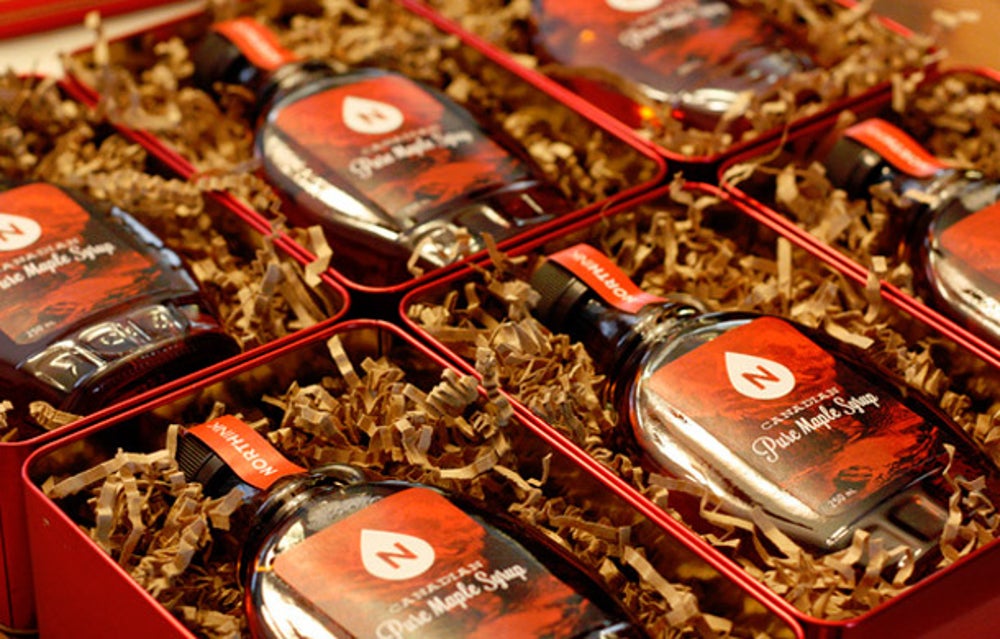 Northink develops personalized gifts with two goals: highlight the graphic design firm’s high-end prowess and underscore its Canadian roots. In 2010, the result was individually packaged bottles of maple syrup, an effort that has been noted by design blogs and others across the globe. The team chose a size of bottle small enough to ship, customized the label, red tins and a craft paper belly band with the Northink logo. “We wanted it to feel crafty and have a hands-on treatment, says Catherine McLeod, Northink creative director. The team sent 24 bottles to existing clients at a cost of $30 each (including shipping). 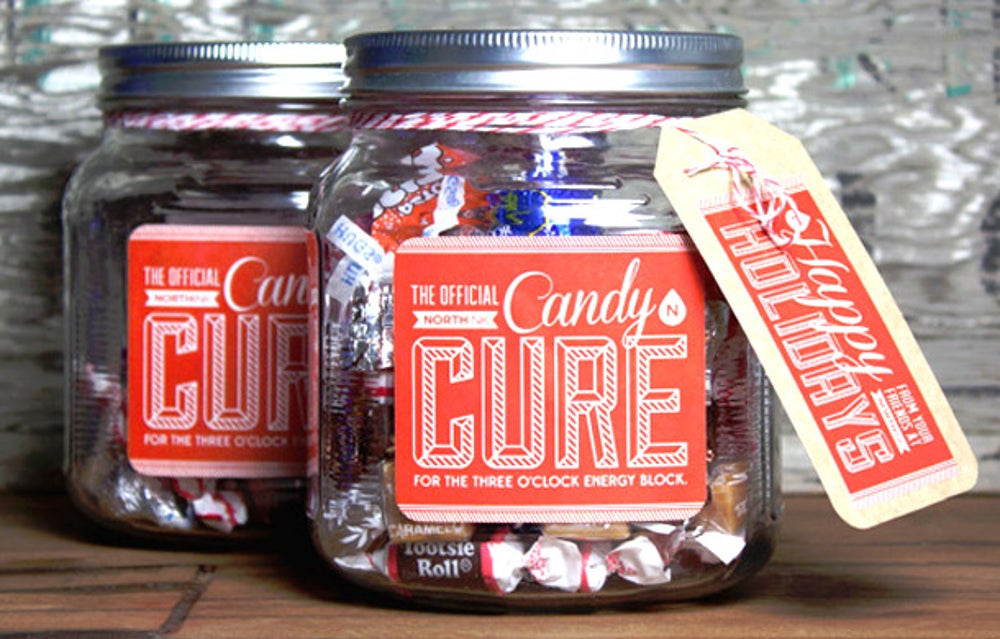 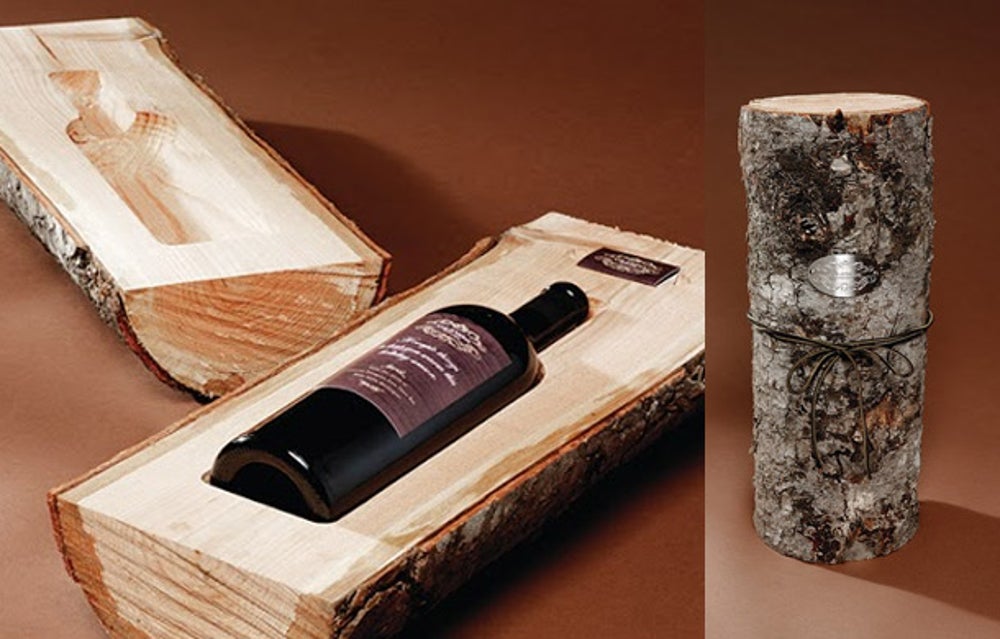 “I have a drawer full of stuff that did not surprise and delight,” says Mike Doherty, president of Cole & Weber United. The head of the Seattle branding firm didn’t want his gifts to be similarly discarded. In the past the company had developed gifts with a non-profit tie-in. In 2012, it was time for a treat for the clients themselves, and the firm made designing the holiday gift a prized assignment among the staff.

The end result was a nice bottle of wine neatly nestled in a custom-carved log turned-box. The log box included a note about pouring a glass and settling in front of the fire. The team sent about 50 gifts at a cost of $35, plus shipping. “We wanted to have the element of unwrapping, so you really felt like you were getting a gift,” Doherty says. 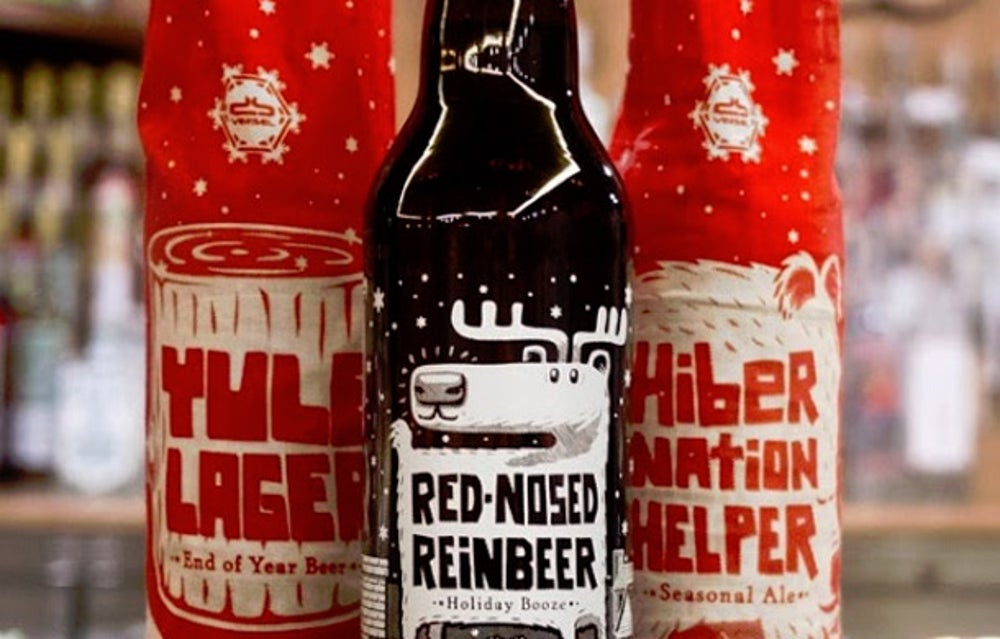 Chicago-based package design firm Vessel is known for its work for large consumer products firms, says Tony Ruth, creative director and co-owner. Custom-designed beer bottles allowed the firm to share its “internal brand of semi-functional nonsense” with existing clients. The idea was to “publicize a broader, less corporate skillset and hunt down some indie brands and startups to work with.”

The 24 oz. unlabeled beer came from Southern Tier Brewery in Lakewood, N.Y. in exchange for a “very fancy single bottle of scotch.” Printing cost $1.50 per bottle; shipping via FedEx was $12 for two bottles in one box. In total, the firm printed about 120 bottles. 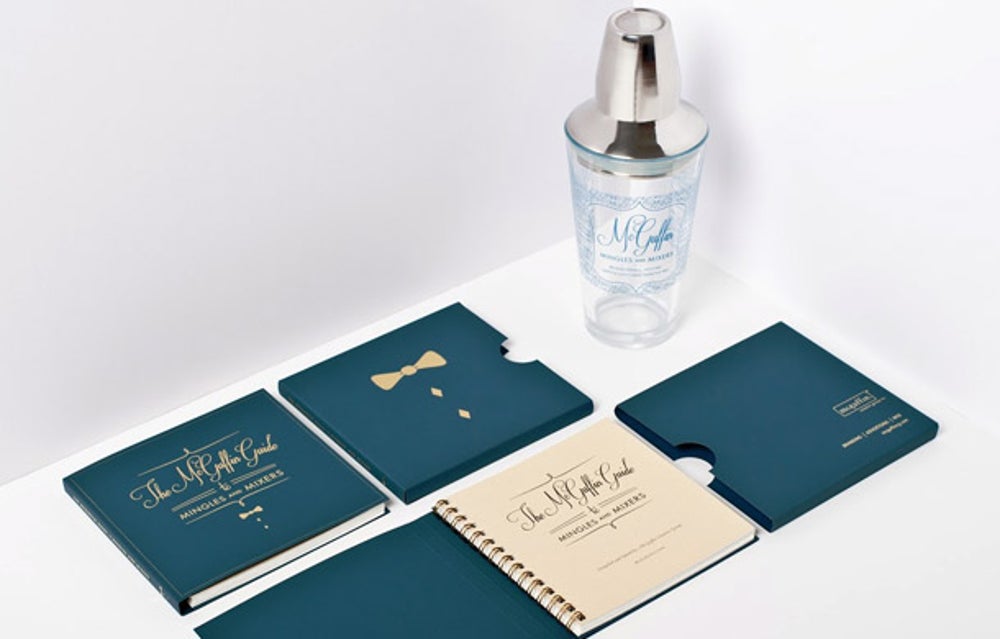 “We have a tendency to really like parties,” quips McGuffin President and Creative Director Chris Scullens. So, it stands to reason that in 2011 the Chicago-based creative group developed a sleek giveaway perfect for hosting parties. In fact, the Mingles and Mixers how-to cocktail book was so popular it was used as the basis for their summer client party in 2012. The firm spent about $8 each (not including shipping) for 500 books, some of which were hand delivered and the rest sent via snail mail. A coordinating martini shaker was made as a giveaway for a follow-up party, but was not part of the original gift. 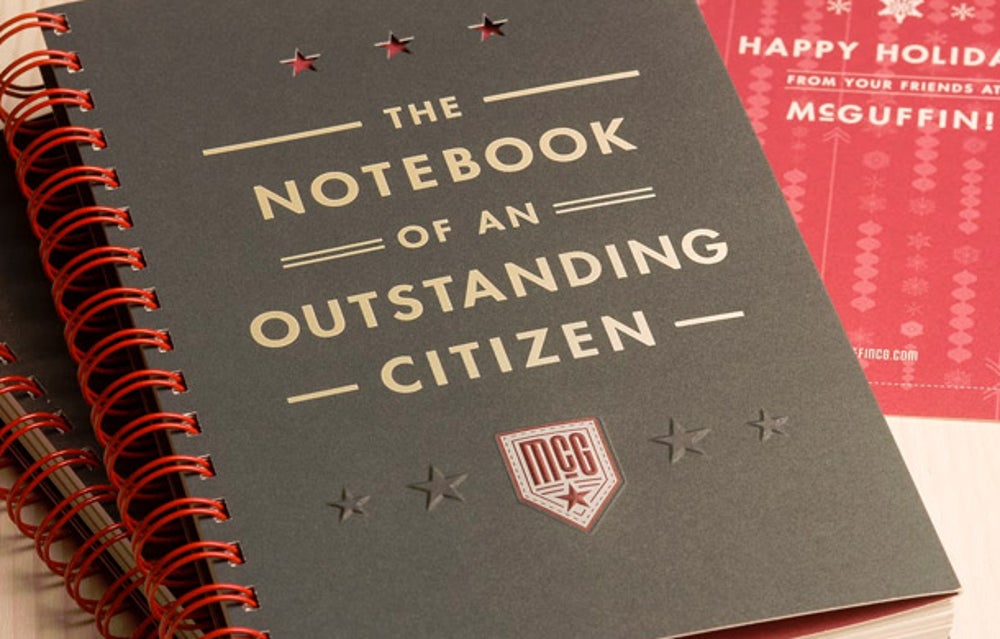 The 2012 holiday gift from McGuffin, a grown-up spiral-bound sticker book called The Notebook of an Outstanding Citizen, allowed recipients to give co-workers and friends kudos for everyday tasks, like recycling office paperwork. 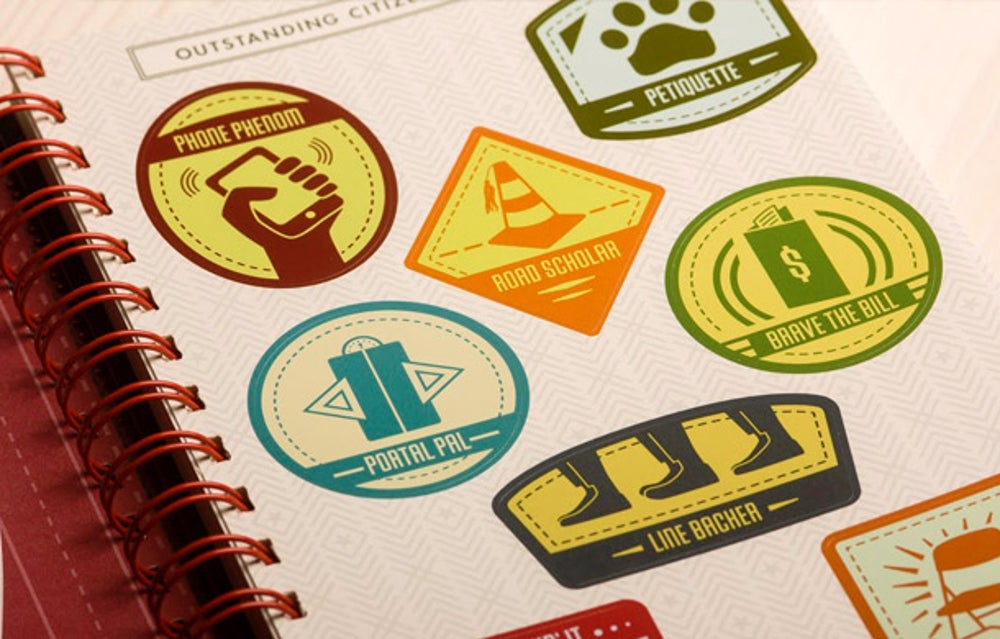 The book, reminiscent of Boy or Girl Scout badges, was such a hit one client asked the firm to replicate it for their 75,000 employees; it ended up adding a new client to McGuffin’s portfolio. 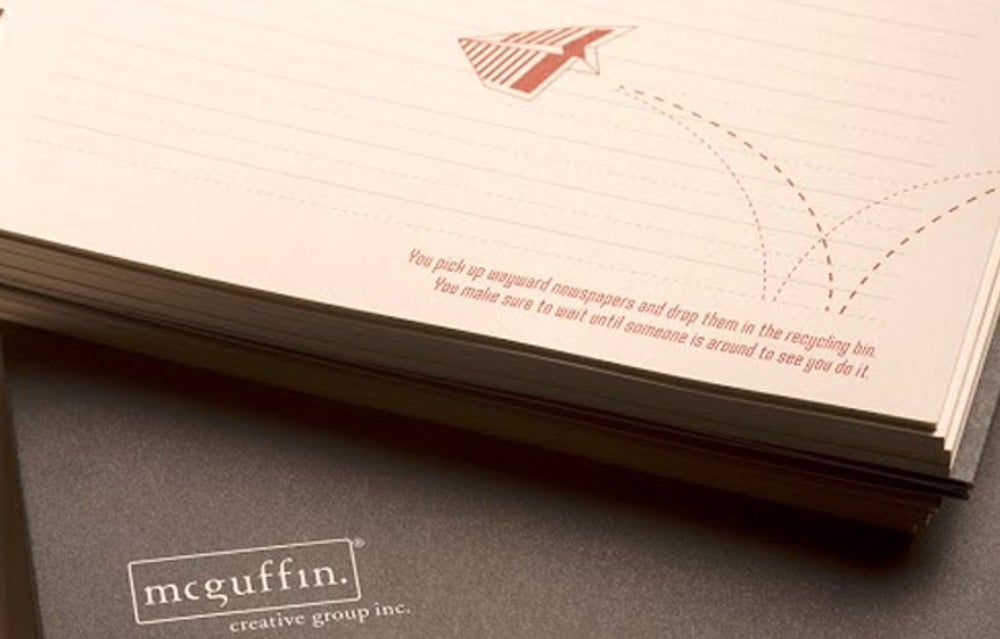 McGuffin's scouting-themed book was essentially a notebook that clients could use in their everyday work, one that included the agency's subtle branding on the back cover.