On Earth Day, we take a look at a crop of promising startups attempting to combat climate change.

The newest generation of entrepreneurs grew up in the era of recycling, electric cars and Al Gore's An Inconvenient Truth, so it's no surprise that many are starting companies to combat global warming.

On Earth Day, it's a good time to take a look at a crop of promising green startups. Some are focused on specific niches, such as clean fuels and efficient electronics manufacturing, while others are taking a consumer-focused approach, providing easy-to-use tools to help everyone make environmentally friendly choices. Even in a challenging capital-raising environment for green companies (more on that later), these young companies are gaining the support of venture capitalists.

Related: Eco-Friendly Actions Will Save Your Business Money

Plano, Texas-based Choose Energy, for example, announced on March 26 that it raised $4 million to expand its online platform, which allows consumers and small businesses to shop for energy plans based on a variety of factors, including how green the providers are. "About 40 percent of our customers choose wind power," says founder and CEO Jerry Dyess. "A lot of people think it's more expensive, but in most cases, you can save money by switching to a 100 percent green product."

Choose Energy, which was founded in 2008, operates in four states where energy is deregulated--meaning consumers can choose among different providers--and has plans to expand its services nationwide, Dyess says. The company is also developing technology for energy providers to use in customer acquisition and support. The recent fundraising, led by Kleiner Perkins Caufield & Byers and Stephens Capital Partners, will help support Choose Energy's new satellite office in San Francisco.

Arctic Sand, which was spun out of the Massachusetts Institute of Technology in 2011, is attacking a different side of the global-warming problem: heat loss from gizmos such as cell phones and set-top boxes. Nadia Shalaby, CEO and co-founder of Arctic Sand, says the conversion of power from one form to another--say from AC to DC--inside these devices is typically a seven-part process, and that heat escapes during each step. The company has developed a new type of semiconductor to shorten that process, thus cutting down on heat loss.

"About 80 percent of all energy generated worldwide is lost in the form of heat," Shalaby says. "It's a sad statistic, but one we could change by investing to make power conversion more efficient." Shalaby estimates that if Arctic Sand's products were widely adopted, they could save seven million tons of carbon dioxide emissions a year.

Even though Arctic Sand is more than a year away from introducing its first product, the Cambridge, Mass.-based company has already caught the attention of the venture capital community: It raised $9.6 million late last year from a syndicate of investors that included Arsenal Venture Partners and Dialog Semiconductor. 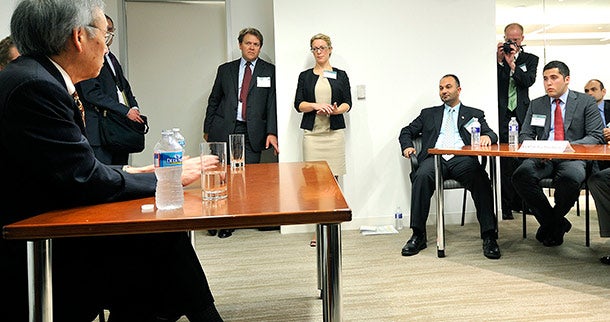 Another college spinout--NuMat Technologies, born at Evanston, Ill.-based Northwestern University in 2012--is garnering kudos for a technology it developed for storing natural gases, such as methane. The company developed porous materials that can be used to line natural-gas tanks, for example, in cars. Storage of natural gas is so challenging that many experts believe it's a major deterrent for the widespread adoption of clean-energy solutions. That's the problem NuMat set out to solve. "What these materials allow you to do is to store natural gases at much lower pressure. That makes the tanks cheaper and safer," says Omar Farha, NuMat's chief scientific officer.

NuMat has raised more than $1 million in prize money, including a first-place showing at the 2012 Clean Energy Business Plan Competition, run by the U.S. Department of Energy. Farha says participating in business-plan contests not only exposed the startup to potential funding sources, but also provided much-needed feedback on NuMat's strategy. "The Secretary of Energy Steven Chu was brilliant. He talked to us scientifically about the positives and negatives of our approach," Farha says. NuMat hopes to close a $2 million funding round soon.

Farha and other green entrepreneurs will face plenty of obstacles, though, not the least of which is that VC investing in the area seems to be on a downward trend. In 2012, total venture dollars invested in clean tech startups dropped more than 30 percent to $6.46 billion, according to San Francisco based consultancy the Cleantech Group, which cited a variety of factors for the drop, including a poor IPO market for green companies and a difficult pricing environment for alternative fuels.

Yet, such blips don't seem to be deterring this new generation of green entrepreneurs. "Like everything else there's a gold-rush mentality at first, then you shake out the winners and losers," says Jay Webster, who was recruited by VC firm Kleiner Perkins to serve as president of Choose Energy and run the company's new San Francisco office. "There is still so much opportunity to invest in improving energy generation, distribution, and consumption. Money will come back in--it will just be more carefully applied."

Arlene Weintraub has over fifteen years of experience writing about health care, pharmaceuticals and biotechnology and the author of a book on the anti-aging industry, Selling the Fountain of Youth (Basic Books, 2010).She has been published in USA Today, US News & World Report, Technology Review, and other media outlets. She was previously a senior health writer for BusinessWeek.