Two entrepreneurs help tackle the clean-water crisis in impoverished communities around the world.

By Gwen Moran
October 20, 2010
This story appears in the November 2010 issue of Entrepreneur. Subscribe » 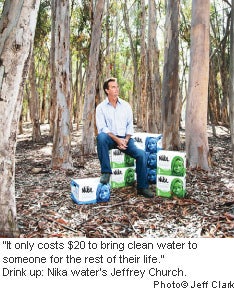 Jeffrey Church and Michael Stone are addressing the developing world's clean-water crisis by selling purified water in the developed world.

Water isn't the core business of these two San Diego-based executives. Church is CEO of Universal Building Products, a manufacturer of specialty products for the concrete construction industry, and CEO of Autus Capital, a $25 million private equity firm. Stone is founder and retired chairman of J.H. Whitney Investment Management--where he worked with Church--and a founder and managing member of Westwind Investors.

After a mutual contact introduced them to the head of a non-governmental organization working to help children around the world, Church and Stone were so moved, they took their families to Kenya to learn about what the group was doing to address the lack of drinking water.

"It was transformative to see what a difference a few dollars can make," Church says. "It only costs $20 to bring clean water to someone for the rest of their life." Work on irrigation systems is inexpensive in Africa, with costs low on everything from materials to labor.

He and Stone, who each have supported their share of charities, felt they could do something that would make a difference. In March 2009, they created Nika Water-- named for the Zulu word "to give"--a bottled-water company that would donate all of its profits to organizations that provide people access to clean drinking water. The initial goal of the La Jolla, Calif., company was to hit $10 million in annual revenue, which would give the pair $1 million in profit to donate.

But they needed to tread carefully. The bottled-water industry is receiving backlash from people concerned about the plastic the industry produces, how recyclable it is and the overall carbon impact created by the industry, Church says.

For every 98 bottles of water it sells, Nika Water--collaborating with Carbonfund.org and its Nicaraguan reforestation project--plants a tree in Nicaragua to offset the carbon imprint of that batch. In states where there is no deposit on recyclables, Nika works with refuse and reclamation company Waste Management to provide dumpsters to schools to collect recyclables. Based on Waste Management's reports, Nika donates between 1 and 3 cents per recycled bottle to the school.

And what about that $10 million revenue target? Church believes Nika Water will hit it--and he would like to see it get even bigger. "We want to continue to get big so we can fund more and more projects," he says. "Ideally, we really want to be the perfect model of sustainability."