Is Your Office Making You Sick?

It could be. Microbiologist Dr. Charles Gerba explains how your office location, gender and work habits can affect your office cleanliness and shares his secrets to staying germ-free.

By Kristin Edelhauser February 14, 2007
Opinions expressed by Entrepreneur contributors are their own.

If you've been noticing more absences around your office, don't be alarmed: It's the peak of cold and flu season. According to the Centers for Disease Control and Prevention, the season typically lasts anywhere from late December through March, but peaks in February. With the long hours most of us put in at the office these days, spending more time at your desk means a greater chance of germ build-up--and illness.

So, what can you do about it? In the last few years, we've been bombarded with messages from the media about how germy our lives have become--from Oprah's expose on household germs, to the Today show's testing of hotel room cleanliness. We've also heard plenty of antibacterial products promising to keep our homes and offices cleaner. But do they really work? Just how effective are these products in preventing the spread of germs, and ultimately, illness?

We consulted with a microbiologist from the University of Arizona at Tucson to get the truth about germs in the workplace. Dr. Charles P. Gerba, a nationally known expert on household microbes and intestinal diseases, is one of the first microbiologists to intensely study bacteria counts in the workplace. Along with The Clorox Company, Gerba and his team of researchers have tested thousands of samples in hundreds of offices throughout New York, Chicago, Florida, San Francisco, Arizona and Oregon. Gerba has learned that many factors go into creating a germy office--from office location to gender to occupation.

Getting Down to the Nitty-Gritty
From his studies, Gerba has discovered that in most work environments, offices and cubicles have higher bacteria levels than surfaces in common areas. What spot in your office space is friendliest to germs? Telephones topped the charts in most offices across the United States, followed by desks and computer keyboards. "The phone is typically the dirtiest piece of equipment in an office because it goes straight to your mouth, and you never clean or disinfect it," Gerba says. 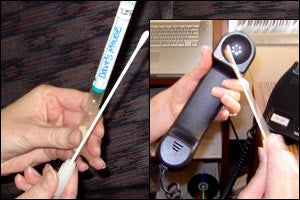 We decided to take matters into our own hands to see just how accurate Gerba's studies are in relation to our own office cleanliness at Entrepreneur.com. Gerba sent us 20 swab tubes and a cooler with a frozen ice pack to our Irvine, California, offices. We tested 20 different spots in our office used by employees daily. After swabbing the different surfaces, we sent them back to the University of Arizona and waited several weeks for our results.

When Gerba interpreted our data, he looked at the numbers in surprise and remarked on what a clean office we have. (Phew!) Though we ranked as one of the cleanest offices Gerba has sampled, he did point out a few items that were off the charts. "That is one of the dirtiest toilets I've seen," Gerba said as he viewed the data of our men's restroom toilet seat. Gerba explains that contrary to popular belief, most office spaces and items, like desks and phones, end up having more bacteria than the average office toilet seat. In past studies, he has found that the average desk harbors 400 times more bacteria than the average toilet seat.

To give you an idea of how we compare with other offices across the country, here are a few examples (including that toilet) of where we significantly differed from the norm:

Aside from the men's toilet seat, our office did have a few other extreme items. For starters, a coffee mug we sampled only had a bacteria count of 10, a number Gerba says is typically in the thousands. One employee's water glass, on the other hand, had a count of 52,000. Most likely, this glass was being used on a regular basis and hadn't been cleaned in quite a while. Think about how often you actually disinfect your coffee mug or water glass after using it. If visions of germ armies just danced in your head, you may want to start washing your mugs and glasses with hot, soapy water daily.

Where Exactly Did You Catch That Cold?
Now that we know which office items harbor more bacteria and need a little extra TLC, let's look at the factors that contribute to making one office germier than another.

Unfortunately, no matter how much of a clean-freak you are, if you live on the East Coast, natural elements are working against you. According to Gerba, East Coast offices win the germiest title, hands-down. "The dirtiest offices are on the East Coast since people are in larger buildings and tend to bring food to their desks more often," Gerba says. "East Coasters also tend to spend more time indoors due to the bad weather." Which Eastern city tops the charts as being the best environment for bacteria to grow? Gerba says that New York is Germ City, with Chicago coming in a close second. On the other hand, the cleanest offices can be found in San Francisco and Tucson, Arizona.

Location is key, but what about the job itself? Gerba tested phones, desks and computer mice within a variety of different occupations, and discovered that the most bacteria per square inch was found on surfaces used by school teachers because of their constant contact with children. Accountants ranked second to teachers, followed by bankers, radio disc jockeys and doctors. Consultants, publicists and lawyers harbored the least amount of bacteria per square inch in their offices.

Aside from your career, gender can also play a factor in office cleanliness. In his latest "Germs in the Workplace" study, Gerba compared the number of germs in women's offices and men's offices to determine the germiest gender. You might be surprised by the results: According to his research team, the bacteria levels in women's offices were nearly three times higher than in men's offices. Gerba explains that appearances can be deceiving. "What we found is that women seemed to have more 'stuff' in their offices, from makeup bags to pictures of family and purses on their desks," he says. "It added up to big numbers for women, even though their offices typically looked cleaner."

How to Be Germ-Free
All this germ talk leads us to our next topic: office sickness. Gerba points out that thanks to their high-bacteria counts, New York offices experience the highest number of viruses and colds.

So how can you protect your office from becoming a comfortable spot for bacteria to grow? Gerba suggests these simple steps:

By using these tips, employees and employers could potentially cut absenteeism in half. That means reducing the typical two-to-three colds per employee each year. That figure doubles for workers with children.

It's a simple solution for a nasty issue. And offices across the nation are taking notice: Gerba says he's noticed a decline in the number of bacteria in most offices he's tested over the last four years thanks to the use of antibacterial products. "We see more use of disinfectants and hand sanitizers than we used to in offices," he notes. If office hygiene hasn't been adopted yet in your workplace, now's the time to set some guidelines and arm employees with the protection they need to ward off unwanted desk buddies.

For more tips on keeping your office germ-free, visit the website for the Centers for Disease Control and Prevention.

5 Work Trends Business Owners Should Focus on in 2022

Why Self-Leadership is Essential to Your Success