Carving Out a Niche

Find out how two snowboarders established a brand that's giving their peers a place to call home.

January 15, 2008
Opinions expressed by Entrepreneur contributors are their own.

What happens when a Las Vegas hotelier teams up with a rebellious professional snowboarder? A first-of-its-kind hotel built for and by snowboarders, complete with boot dryers, glove warmers, PlayStation 2 consoles and 56-inch high-definition TVs in the rooms.

Prior to their partnership, both Marc Frank Montoya, age 33, and Liko S. Smith, age 36, were snowboarders, though with very different backgrounds. For Montoya, skating and snowboarding were life. Since the age of 17, Montoya depended on his snowboarding obsession to keep him out of trouble in the gang-filled Denver streets he grew up on. But his natural abilities and work ethic helped him get noticed by sponsors, and by the time he received his first check for snowboarding in 1996, he was hooked.

"I'm a hustlin' fool," Montoya says. "I'm making money doing what I love. I do what I want when I want. After snowboarding, I've never had a boss."

Since then, Montoya, who says he's known on the mountains for his "lazy Mexican style," has been traveling the world, chasing the freshest powder for countless snowboarding videos and competitions. Montoya was named "Rock Star of the Year" in the 2004 TransWorld Riders' Poll and placed third on Snowboarder magazine's list of the top 10 riders of 2005. 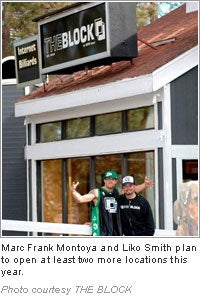 Smith's interest in snowboarding, on the other hand, was strictly recreational before THE BLOCK. For more than 13 years, Smith gained hotel management experience before deciding to break away from the corporate world and start his own company, Rogue Hospitality, in 2003.

The two unlikely allies teamed up after Montoya married Smith's sister. Smith purchased a hotel in South Lake Tahoe, California, that eventually became part of THE BLOCK, but he credits Montoya with developing the "hotel for snowboarders" concept. When Smith saw Montoya on a snowboarding video, he knew he was the perfect personality for the brand. "When I saw his segment, I said, 'This guy's amazing. I can build a brand around this guy in three seconds,'" says Smith. "Marc had a message in his branding that was just unbelievable."

Montoya's hip-hop persona coupled with Smith's business acumen and military-taught discipline became a winning combination. In 2004, the first BLOCK hotel opened in Lake Tahoe, California, followed by one in Big Bear Lake, California, in 2006. The next BLOCK location is set to open in Mammoth Lakes, California, in May, followed by the opening of their flagship property in Breckenridge, Colorado later this year. The Colorado BLOCK location will expand on the previous hotels by including a nightclub and bar. Smith says he's also looking into building a BLOCK terrain park and snowboarding school there.

Aside from expansion, THE BLOCK has found a unique way to market itself to its core demographic--by taking to the airwaves. In 2007, THE BLOCK premiered its own reality TV show, appropriately titled THE BLOCK, on the G4 network. Currently, filming is underway for season two.

"What I love about our reality show is it's completely real," says Smith, who adds that this will be obvious in the first two episodes, which should air sometime in mid-February. "After the first 24 hours of boot camp, there's no way an actor could still be there."

Smith is referring to THE BLOCK Boot Camp '07, an event he and Montoya held in December to find employees to staff their new hotels. Smith hired Army Rangers and Marines to make sure the camp was run "the right way." They received about 400 applications from around the world, and selected 50 for the boot camp. "They were sleeping six to a room, no baths, 20-hour training days, no sleep, no food [for the first 72 hours]. We wanted to make sure people really wanted to be here," says Smith.

He explains that THE BLOCK will continue participating in the reality show as long as it's relevant to snowboarders. He's also working on a deal that could take THE BLOCK abroad, possibly to Finland, where Smith talks of building a "snowboarder land."

But what remains most important to Smith and Montoya is staying true to their original vision and not letting critics get in their way. "Every one of my loved ones told me I was completely out of my mind to do this, even snowboarding companies," he says. "It really took a lot of guts. Marc and I were the only ones in this together when it really counted."