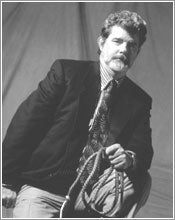 "Everybody has talent. It's just a matter of moving around until you've discovered what it is."-George Lucas

No other 20th century filmmaker has had a greater impact on the film industry than George Lucas. His zeal for innovation forged a new relationship between entertainment and technology that revolutionized the art of motion pictures. His uncanny business acumen turned film licensing and merchandising into a multibillion-dollar industry. And his "Star Wars" trilogy ushered in the era of the Hollywood mega-blockbuster.

Lucas was born in Modesto, California, on May 14, 1944. As an adolescent who, as he says, "barely squeaked through high school," Lucas aspired to be an auto racer. He changed his mind about a racing career, however, when a near-fatal accident crushed his lungs and sent him to the hospital for three months just days before his high school graduation. The experience changed Lucas. "I realized that I'd been living my life so close to the edge for so long," he says. "That's when I decided to go straight, to become a better student, to try to do something with myself."

Lucas enrolled at Modesto Junior College, where he developed a fascination with cinematography. Deciding on a career in film, he applied to the prestigious University of Southern California (USC) film school. USC was a milestone for Lucas. "Suddenly my life was film-every waking hour," he says in a 1997 Playboy interview. He concentrated on making abstract science fiction films and mock documentaries, which caught the attention of director Francis Ford Coppola, who invited Lucas to sit in on the shooting of "Finian's Rainbow." Coppola also persuaded Warner Bros. to make a film of one of Lucas' student movies. The full-length feature, "THX-1138," a bleak Orwellian tale, was released in 1971 to modest reviews and a lukewarm reception at the box office. But studio executives were impressed with Lucas' obvious talent.

"THX-1138" had earned Lucas a reputation as a skilled but mechanical filmmaker devoid of humor and feeling. His second film, "American Graffiti," which was based on his own coming of age in Modesto, would change that. Filmed on a shoestring budget of just $780,000, the film became a smash hit soon after its release in June 1973 and eventually grossed $120 million.

The film got rave reviews and made Lucas a Hollywood sensation. It also proved to be a defining moment for Lucas, as both a filmmaker and a businessman. Studio honchos pulled rank and made changes to Lucas' final version. The changes were minor, but the scars were lasting. "I'm very aware as a creative person that those who control the means of production control the creative vision," he says. "It's not a matter of saying 'You're going to let me have the final cut,' because no matter what you do in a contract, they will go around it. Whereas if you own the cameras and you own the film, there's nothing they can do to stop you." And that's exactly what Lucas set out to do.

When negotiating with 20th Century Fox in 1975 for his next movie, "Star Wars," Lucas cut his directing fee by $500,000 in exchange for things Fox regarded as nearly worthless: ownership of the film's merchandising and all sequel rights. It turned out to be a brilliant move, one that assured Lucas the real independence and creative control he'd been seeking. "Star Wars" shattered all box office records, earning Lucas about $40 million in its initial release-merchandising would later bring him tens of millions more. Most important, Lucas owned the sequels, and thus a franchise. To maximize its value, he financed his first sequel, "The Empire Strikes Back," himself, borrowing heavily to cover the $30 million production costs. Given the success of "Star Wars," it was a good bet, but a huge risk-if the film bombed, Lucas would be bankrupt. "Empire" did exceptionally well, however, as did the third film in the trilogy, "Return of the Jedi," which Lucas also financed.

Lucas further increased his fortune in the 1980s by producing the three Indiana Jones movies, for which he earned well over $100 million. Then, at the very top of his game, he largely abandoned moviemaking and poured his fortune into digital experiments that, he sensed correctly, would transform the movie business.

His main focus was Industrial Light & Magic (ILM), which he created in 1975 when he couldn't find an outside company to do special effects for "Star Wars." ILM's first breakthrough was a motion-control camera, which could revolve repeatedly around stationary objects while remaining in constant focus, thus simulating flight. To generate cash, Lucas turned ILM into a service company. Having created a market for special-effects-laden films, he began taking on work from other filmmakers. This way he could keep developing techniques while other people funded his research.

Charging up to $25 million per movie, ILM was almost immediately profitable, supplying the special effects for such blockbusters as "Jurassic Park" and "Twister." Lucas funneled ILM profits into related businesses that sprang from his research. Skywalker Sound emerged as the industry's top audio post-production company, then branched out to providing a digital sound system for theaters and homes under the name THX (in honor of his first film). And with the founding of LucasArts Entertainment, Lucas moved into video games, producing such top-sellers as the "Star Wars"-inspired Rebel Assault, X-Wing and Dark Forces.

By the mid-1990s, Lucas decided to return to filmmaking and began work on the script for the "Star Wars" prequel, "Star Wars: Episode I, The Phantom Menace." To create a buzz for the new movie, he embarked on a carefully planned marketing strategy. In 1997, he re-released the "Star Wars" trilogy as a special edition, which scored $475 million at the box office. The huge popularity of the films built a new audience for "The Phantom Menace." Just as important, it provided Lucas with the $115 million he needed to finance production, guaranteeing him both complete creative control and greater profits. Again, it was a gamble. But again, it paid off.

Released on May 19, 1999, the film broke all box office records, taking in an estimated $42 million on its opening day. By September, it had become the top-grossing movie of the summer, raking in $419.4 million, more than twice as much as its closest competitor.

The success of "The Phantom Menace" firmly established Lucas as one of the most powerful-and profitable-people in Hollywood. But the admitted workaholic isn't about to rest on his laurels. Plans for "Star Wars" Episodes II and III are already on the table, as well as plans for a fourth Indiana Jones movie.

During his nearly 30 years as a filmmaker, George Lucas has advanced the art of motion pictures by taking risks and continually pushing the envelope. He has changed the way Hollywood makes films by setting the standard for what a modern commercial movie can be. And it's not over yet, young Jedi.

A Touch Of Magic
Just how much impact has George Lucas had on the movie industry? He directed or produced four of the top 10 grossing films of the 20th century. His Industrial Light & Magic has played a key role in 11 of the top 20 box office hits of all time, including "Titanic," "E.T.," "Jurassic Park" and "Forrest Gump."