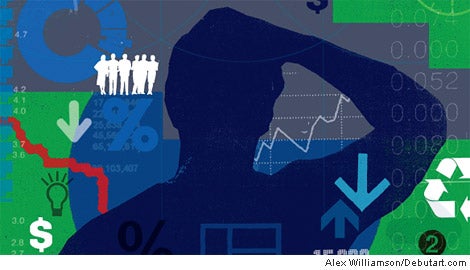 As recessionary gale storms blow, entrepreneurs are reining in runaway costs. "Smart entrepreneurs are doing more with less," says Joseph R. Cardamone, president of the U.S. Federation of Small Businesses. "With diminished cash flow and tight credit, only those businesses that operate efficiently will survive this economic downturn, which may last several years." So if you're going to make like a bird and go cheap, these measures can help and range from relatively to totally painless.

Systemic Savings
Announce your plan to ration paperclips and watch employees use binder clips like they're going out of style. "Whatever savings you see from one-off efforts will be short-lived, while costs pop up elsewhere, like for binder clips," says Adam Hartung, managing partner of strategic business consulting firm Spark Partners.

Instead, ask employees to map out how they do their jobs from start to finish, then solicit their ideas for efficiency gains, explains Hartung. "Instead of saying, 'We need to cut travel costs'--which will get everyone groaning--say, 'Let's look at how we get work done and see where we can make changes.'"

To jump-start imaginations, ask: How would you do your job if you worked at a different company? How would you do it if you were four years in the future? You might discover that some part of billing could be automated, a step in payment processing could be eliminated or client interactions could be handled via web conferencing. "Now you've introduced more efficient processes," Hartung says, "and the savings will be everlasting."

The Art of the Barter
Since 1993, Kansas City, Missouri-based Boulevard Brewing Co. has bartered with local coffee company The Roasterie, which receives beer for events in exchange for wholesale rates on office coffee. As purveyor of that beloved golden nectar, a brewery might seem better positioned to barter than, say, a lug nut manufacturer, but barters work for any company if done right, says Jeremy Ragonese, Boulevard's director of marketing. First, clearly define expectations to ensure an equal exchange, he says. "And look for companies where there's a kinship." Boulevard and The Roasterie, for instance, share a commitment to community and a passion for artisan-quality products.

Nancy Kirk, president of PRM Associates, an Omaha, Nebraska-based PR firm, does about $30,000 in barter trades annually. Using Itex.com, she has exchanged services and items for things like advertising and equipment. "It's important that what you sell has low marginal costs--generally, 30 percent of retail or less," says the bartering guru. "Electronic delivery items like e-books are also ideal. Because all costs were paid upfront to create the product, it doesn't cost more to sell extra copies on barter." And remember: "It's only a savings if you use your barter dollars to buy things you would normally pay cash for," Kirk says.

Split the Difference
As COO of 1-800-GOT-JUNK?, Cameron Herold launched one of his most effective cost-cutting measures during tough times in 2002. Herold, who is also founder of Vancouver, Canada-based business consulting firm BackPocket COO, determined the average cost of business trips and told employees that when they spent less than that, he'd split the savings with them. Employees tended to cut travel expenses by about 40 percent--fattening their own wallets and helping the company accumulate annual savings of about $120,000. Buzz kill

Messing with people's coffee? You better tread lightly. "People think they save by eliminating coffee or buying cheap brands," says Ben Kirshner, CEO of OfficeCoffee.com, a referral site for coffee, water and vending services, "but they'll pay for it in lost goodwill." Not to mention wages. A high-quality coffee experience in the office, using single-serve technology whose every cup is fresh (Keurig and Flavia are popular), costs about 40 cents to 50 cents a cup, while a standard glass-bowl system runs 2 cents to 8 cents per cup. But the latter brew becomes burnt goo by afternoon. Employees toss it and run to the nearest coffeehouse. The math is simple: If you pay an employee $30 an hour, then two 15-minute coffee breaks will cost you $15 in lost wages. "You're better off reducing costs without affecting quality," says Kirshner, who offers these tips:

Why Buy?
"Particularly during an economic downturn, leasing provides a way for entrepreneurs to get equipment without a large outlay of cash," says Scott Sullivan, a senior vice president of Key Equipment Finance. "They can conserve that cash for revenue-generating activities."

Meanwhile, the IRS doesn't consider certain leases to be a purchase, but rather a tax-deductible overhead expense, so check with your accountant, Sullivan says. "Companies may be able to deduct the lease payment from corporate income." In those cases, leased equipment doesn't have to depreciate over its useful life. Translation: immediate write-off of dollars spent.

Maximize the useful life of computers--and minimize costly IT problems--by replacing your entire system every three years, says Jennifer Whitlock, principal of HelpDesk Co., which provides IT support to SMBs. "Of course, not everyone is in the position to do this," she says, "but three-year IT leasing options make it more viable." (A phased approach--changing one-third of a system annually--also yields savings, adds Whitlock.)

Confessions of a Corporate Purchaser
Unless you wheel and deal daily with office suppliers, as does David Clevenger, vice president of group purchasing organization Corporate United, you wouldn't know that distributors change about 25 percent to 40 percent of their items annually, he says. That means the discount you negotiated at the beginning of your three-year contract for Hi-Liter A (among other items) no longer applies. You'll get Hi-Liter B--similar in all its specs except price. To outsmart the retail racket, Clevenger advises you:

It's no fun making tough choices, but remember: Misers are survivors.

Tiffany Meyers is a Chicago writer whose coverage of design, sustainability and business has appeared in venues such as Advertising Age, PINK, Metropolis, HOW, Communication Arts and The Chicago Tribune, among many more. Reach her at tiffanymeyers@verizon.net.

Financial Empowerment Means Asking for the Salary You Deserve. Many Don't Know How.