Centrl is a smart-phone application that lets you see which of your Facebook friends are around. You can spot nearby buddies on a screen-based map and send them instant messages. You can even mark a map location to let them know about a good restaurant or nightclub. Retailers can send you a coupon if you're near. And you can share that coupon with your friends.

The just-launched iPhone program takes your friends on the road and adds an exponential dynamic to the Web 2.0 paradigm called social networking. Centrl is a window to the burgeoning world of mobile social networking, where hotspots, friends and shops can be found on the run, and where advertisers, marketers and app-makers can gather valuable consumer info and target just the people who happen to be nearby. The phenomenon promises to upend traditional advertising, free personal computing from desktops and laptops, and herald a new era of telecommunication.

With computer-like smart phones poised to surpass 308 million shipments in the next two years, the prospect of having a location-aware, content-rich handset in the pocket of nearly every man, woman and child in the United States has an otherwise recession-wary tech industry chomping at the bit for a piece of the action. Software makers that put location-aware, friend-linked apps on iPhones, T-Mobile G1s and BlackBerrys are multiplying.

"Mobile social networking is going to be huge," says Jeff Chester, executive director of the Center for Digital Democracy. "It will be dominant in a short period of time. We could very likely elect our next president based on who is targeting us on our mobile phones."

Major companies have already staked out territory in the fast-evolving market. Last month Google launched its Maps-based program, Latitude. It allows users to let their local map locations be known, and it lets them track friends and family who have also opted in. Not to be outdone, Yahoo this month announced a similar app, Friends on Fire, which works with Facebook to let contacts there know where you are. Meanwhile, Loopt is the well-funded pioneer of the genre. Simple to use and intuitive, it's been featured in iPhone television spots. Overshadowing them all are the 800-pound gorillas of social networking, Facebook and MySpace, which are widely believed to be working on location-based phone apps. They already allow some third-party software makers to integrate with their platforms. 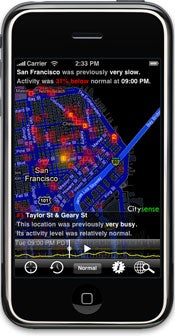 From there on, the players are almost as many and as varied as Tila Tequila's MySpace friends. CitySense is a brilliant but simple program: It shows a dark map of San Francisco, with happening nightspots ranked and glowing hot and hotter according to how many of its users are present. "You can see where the action is and see what places are busy," says Jason Uechi, CitySense's director of consumer services.

Just released in beta form for the iPhone, CitySense is not a social networking application per se because it doesn't locate friends. But Uechi says friend-location services are the next step for the San Francisco-specific application. The business model is on the back end: Sense Networks plans to use the data it collects from users for marketing and database sales. Expansion to cities such as New York and Chicago is being considered, too.

Recently launched app 3banana (iPhone, G1) lets users tag map locations with virtual, Post-it-like notes and share those observations with friends via Twitter, Facebook or a user's own custom, 3banana network of contacts. The business plan calls not for advertising revenue but--and this should appeal to entrepreneurs looking beyond selling an app--for custom rollouts of the app to corporate clients willing to pay for the one-off software. The Woodside, Calif.-based company is running on angel investments, a handful of employees (said to be growing to 15 later this year) and a gung-ho attitude about the future of the smart-phone app. "It is a part of the economy that is just growing like crazy right now," says 3banana CEO Steve Brown.

Similarly, Amsterdam-based IRL Connect allows users to post messages on a map for their friends to see, and it will be integrated with Facebook, MySpace and Twitter. Formally launching next month as a desktop program, it will partner up with app makers, such as GeoMe, that target the smart-phone set. Its business plan will be to sell virtual real estate on local maps. For example, a hair salon at First and Main streets could buy its map location to advertise to IRL users.

"The bakery around the corner could be interested in clientele around the corner," says IRL CEO Frank Schuil. "We'll have moving objects as well. You can be a car company selling a car and let the car drive down the virtual streets of Amsterdam, where I live."

Privacy Concerns
Some consumer advocates are wary. Chester of the Center for Digital Democracy says smart-phone users are giving up too much information in their drive for connectivity and information. He says data collectors often look not only at where someone shops, but at what kind of purchases they make, how much they spend and with whom they associate. He foresees a future in which these same companies could synthesize medical data, racial background and income numbers with the location-based information they collect.

Big Brother, he argues, could follow your every movement, taste, vice and purchase.

"The fact of the matter is that the business model they have developed for mobile advertising is one where lots of user data is collected and user profiles are analyzed," Chester says. "You're talking about multiple layers of surveillance at the heart of the mobile marketing business model that raise serious privacy concerns."

Chester would like to see federal legislation that would require data collectors to inform users each time they're tracked so they can opt in or out. In this model, "there's no data collected unless the user is fully informed," he says.

He might be putting the cart before the horse, however. While mobile social networking's potential for advertising--sending sale notices, coupons and other offers to someone nearby--is idyllic on paper, there hasn't been a mad rush of ad money. And that could slow the development of the phenomenon. Many app makers aren't forecasting decent revenue until deep into 2010 and beyond. So far most seem to be relying on angel investors and venture capital.

Hybrid Model
Many retailers still don't get it, says David Berkowitz, director of emerging media and client strategy for online ad firm 360i. Their marketing departments, he says, see advertising as online or not. But the advertising here is a hybrid. It starts online and directs consumers not to websites but to brick-and-mortar locales.

"The biggest challenges," Berkowitz says, "are organizational--getting the people who are in charge of driving sales to their stores to adapt to mobile media. The whole value of location-based advertising is to have these real-world, offline interactions. It's a wasted effort to get people to their websites."

Even as the number of people who use their mobile devices to access news and information has doubled in the last year, the mobile social networking ad scene will experience "more gradual than explosive growth," Berkowitz says.

That kind of sobriety isn't exactly embraced by the mobile-app industry, which tends to exhibit the pie-in-the-sky exuberance of the dotcom era. Take the app called Where (iPhone, G1, BlackBerry). It's a powerful, location-savvy tool that lets users not only find friends through Facebook and its own "Buddy Beacon," but can also locate movie trailers for nearby shows, cheap gas and prime eats. It comes across as a killer app, indeed.

To be fair, Where has also prospered from venture capital and other investments--to the tune of $16.5 million over six years. And while venture funds are vetting prospective companies with stricter focus in this economy, Gilmartin says there's plenty of heat--and cash--when it comes to mobile social networking startups. "Seems like every day there's another company getting funded to build something," he says.

Murat Aktihanoglu, founder of New York-based Centrl, agrees. The nine-employee startup is running on seed funding and had advertisers lined up before its launch this month. He says venture capital for tech startups has dried up compared to a few years ago. But there's still heat where mobile social networking endeavors are concerned.

"We believe no matter what the economic situation is," Aktihanoglu says, "when you have a business that's growing, you can get funding. If you have a really good idea, you're going to get more bandwidth from venture capitalists."