Eco-Conscious Entrepreneurs Clean Up with a Soap Business

A couple turns restaurants' cooking oil into soap -- and sells it back to the establishments.
Next Article
Maria Russo
Magazine Contributor
February 22, 2011 3 min read 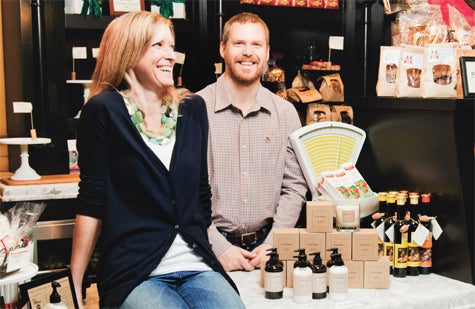 Marshall Dostal grew up in a thrifty New England household in which "throw on a sweater" trumped "turn up the heat." True to his roots, when he found work in the advertising industry and he and his wife, Megan, moved to Pasadena, Calif., he drove a 1984 Mercedes 300D that he ran on biodiesel.

He started making fuel from used vegetable oil he collected from restaurateurs. But all those gallons of glycerin, the byproduct of the refining process, bugged him. Such a waste.

Knowing glycerin is the main ingredient in most soaps, Marshall started experimenting with soap formulas and a new idea: What if, he wondered, the soap could be sold back to the restaurants that had provided the oil? Customers could wash their hands with the byproduct of their frites.

In 2008, the Dostals got serious. They sold a building they owned, and Marshall left his job. They brought in a fragrance expert and came up with a fresh, slightly earthy scent for their soap: a mix of olive, bergamot and grass. "Nothing flowery or powdery," Megan says. "A guy had to be comfortable using it."

They contracted with a Los Angeles lab to manufacture the soap and called their company Further Products, since they were taking the concept of re-use an extra step. Megan designed the parchment-colored labels to convey a homespun, DIY vibe. 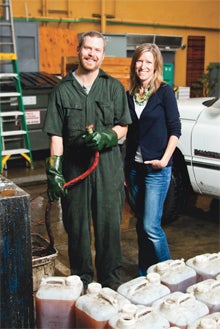 Restaurants jumped at what Marshall calls "the opportunity to use their waste in an interesting way." A sign in the restroom at L.A.'s trendy Pizzeria Mozza reads: "As you wash your hands, you are completing a perfect, sustainable circle."

A few local and regional retailers that carry high-quality green products, including Fred Segal in L.A. and ABC Carpet and Home in New York, also signed on.

In 2009 the Dostals took on an investor, who now owns 30 percent of the company. They bought a bottle-filling machine and a truck--fueled by biodiesel, of course--to pick up the oil, then cart the glycerin to the lab and the finished soap back home to be bottled and shipped. They also developed a moisturizer and a candle featuring the Further scent.

Further products aren't cheap--$12.50 for eight ounces of soap or moisturizer, $24 for the candle--but, Marshall says, being a higher-end brand gives them entree to "progressive and forward-thinking retailers." In December, Further appeared in its first national retailer, Williams Sonoma, after the chain's president, Richard Harvey, found out about the line.

Further produces 10,000 units a month, with production expected to jump significantly in the next six months as new products hit the market. With no employees other than themselves, the Dostals are supporting their family with the business.

"It's kind of unbelievable," Marshall says, "but we may need a warehouse."