How The Irish Know Business 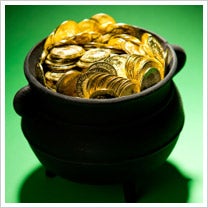 Also because I asked my father about Irish businessmen and women some months ago, and he had quite a response.

My father has long been one of Ireland's heavy promoters. And by that, I mean that we've had many conversations at the dinner table of which great historical figures were Irish, though they were popularly known for being from elsewhere. At Christmas, at my grandparents' house, winter carols turned into lively Irish folk songs.

In fact, I'd use the phrase "lofty Irish nationalism" to describe some conversations I overheard as a kid. So you can imagine the delight of the Irish side of my family when they heard about a book called How The Irish Saved Civilization.

A little over ten years ago, American scholar Thomas Cahill wrote How The Irish Saved Civilization. In it, Cahill detailed the Irish's part in protecting Western Civilization against everyone from the Huns to the Saxons.

My father read Cahill's bestseller and praised it for years after finishing it. In fact, I recall many of my uncles and grandfather talking about Cahill's book at several holidays when I was younger.

Some months ago, I approached my father about writing a blog called "How The Irish Saved Business," thinking I could draw parallels between business and warfare. However, I wasn't sure if it would make sense, so I asked him how I should go about it. In his e-mail reply, he admitted that he didn't have much experience as an entrepreneur and said that he wasn't sure how the Irish saved business exactly, but he suggested that there were a couple of things that the Irish knew about business.

So I just turned the rest of the e-mail into an essay by my father.

There's probably a lot to mine in the connection between being Irish and running a business. A huge number of Irish surnames are on the list of people running America's Fortune 500 companies. America is Ireland's most successful colony.

Real Irish have a lot of good aspects for being entrepreneurs. Generalizing to a great degree, there's unfettered imagination and brashness bordering on recklessness. They don't like rules, or people telling them what they can or can't do, so being their own boss is a good solution. It's also a good way to enter a market that already seems to be "owned" by some dominant companies.

The Irish are great talkers. I think they're generally good salespeople. As salespeople, they'll tend to want to keep talking long after the sale's been closed, which is not strategically smart. I've done this. And where some night complain, the Irish tend to be fine with buying a customer a few rounds long after the work day is done. In other words, the purpose of talking for the Irish is talking, and they can quite easily depart from a pointed focus on the sale.

And there's a respect for people, so that while the Irish might slip into exaggeration from time to time, I think they don't feel right about actually misrepresenting something to the degree that someone will end up in some sort of financial pain. I think maintaining the relationship is very important. There's a respect for honesty in the relationship, even if sometimes the Irish aren't great with a sterile, frozen sense of what's true at any given moment.

A lot of times, the Irish have a gift for transforming what should be a mundane experience into something that strangely feels like fun. People find themselves gravitating to such people because it just tends to be more fun. So, whether it's motivating employees or striking a deal, fun can be effective, and fun is something the Irish can do quite well.

And, although it might be diminished, there was a time when the Irish had to work at any price at any endeavor or starve. That's a powerful motivator. And it was true at a time of great prejudice in the United States against the Irish. So, they have an immigrant's approach to good ol' hard work. No job is demeaning. All labor is good. You may have more money, but I can outwork you every single day of the year because that's the only way my ancestors survived.

And the Irish have the sense of optimism that makes great entrepreneurs.

Having said all that, the Irish make bad employees in a typical sense. I know I still can't sit through a serious meeting without thinking the entire time of funny things to say. It look me 20 years to finally stop blurting them out. Now, I allow boring meetings to remain boring. Straight-laced types think a sense of humor has something to do with a lack of serious intent, but to the Irish, a lack of humor is the same as being dead.

Direct conflict might be an unknown quantity when it comes to the Irish and business. On the one hand, the way the Irish employ language can fly right past people. There's the old saying that an Irishman can tell a man to go to Hell in such a way that he looks forward to the trip. To get an Irishman to speak his mind in a terse, direct fashion is a challenge, especially when it's a situation of direct conflict. On the other hand, it doesn't take much for an Irishman in a situation of direct conflict to just explode. I think a lot of other cultures have a more reasonable middle ground in times of negotiating conflict.