Book Review: The Recipe: A Fable for Leaders and Teams by Amilya Antonetti

By Diane Danielson June 10, 2010
Opinions expressed by Entrepreneur contributors are their own. 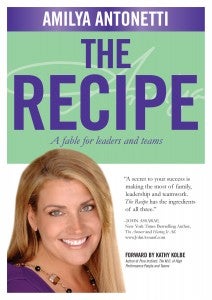 Headed to the beach? Here's one business book you can toss into your beach bag and enjoy reading by the ocean or the pool. It's a light one with a big message.

Generally, I'm not into fables because they tend to be "one concept" books. However, The Recipe: A Fable for Leaders and Teams by Amilya Antonetti is not a one-concept fable. It's much meatier than Who Moved My Cheese? and has a pretty good Tips and Exercises section at the end. I also found it to be useful for both individuals (which of these characters is me?) as well as for team leaders (which of these characters are my employees?).

The story involves sons of the "Givvantake" family who inherit a bakery from their deceased parents. As often happens in real life, each of the brothers brings his own special talents, bad habits and familial history with him into this new task of running the bakery. While women may initially balk at the absence of a sister ... no worries, the level-headed female guide through the book more than makes up for all the testosterone.

For managers, it would be interesting to see if not only you but also members of your team could recognize themselves in any of the characters. I personally saw bits of my own bad habits in a couple of the characters, and there were some I definitely identified better with than others. What it boils down to is that there are potentially six types of team members:

It's a leader's job to get these different personalities to work together as a team by providing them with tools and direction. Antonetti's book provides guidance on this via the fable itself as well as in the tips section at the end. Realistically, not many managers will be able to watch employees try and fail patiently as the female "guide" does during the fable. But chances are, by the time you pick up this book, you've already observed your team for a while.

I actually think that if you are leading a team through difficult times, you should put both The Recipe and Chip and Dan Heath's Switch into your beach bag. Between the two of these books, you should be able to get your team moving in the right direction.

One final thing I liked about The Recipe was that it acknowledges the fact that many of us bring our personal baggage with us into the office. In this case, birth order and interfamily issues helped create some of the problems for the brothers. It also shows the difficulty of working in a family business when the family can't separate your professional self from the self you were when you were 5 years old.

For more on how your personal baggage can affect your career, you might want to check out:

One side note: I couldn't help but wonder what would have happened if Antonetti upped the drama by throwing in one more character--maybe a surprise half-sister named Ivana Takeandtake, and made her a narcissist, borderline or other high-conflict personality? Now that would really stir this pot (or perhaps be too realistic to be a fable!).

Why is talent management essential in a business?