By Diane Danielson July 29, 2010
Opinions expressed by Entrepreneur contributors are their own. 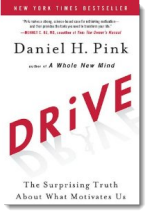 Drive: The Surprising Truth About What Motivates Us by Daniel H. Pink is one of those books that makes you wonder why we are having so much trouble getting over the command-and-control/face- time-and-billable-hours business models. In a nutshell--or should I say, in a "tweet"--which Pink so gamely prepares for us: "Carrots & sticks are so last century. Drive says for 21st century work, we need to upgrade to autonomy, mastery & purpose."

While Drive is like a lot of business books that focus on a new trend--i.e., really just an extended magazine article--it does hammer home some salient points. What I liked was that it broke down which types of work can be motivated by carrots and sticks and which types of work can't.  Of course that explains what could be the downfall of the book/theory: How do you treat different parts of a single company differently and then make it all blend together? The examples within the book were often "all in" ROWE, or results-only workplace environments. A company realistically would have to learn how to be more of a hybrid--adapting appropriate managerial behavior to its diverse employees.  That could be extremely difficult to implement.

Below are some of the points that jumped out at me:

I didn't make too many notes in this section, because this seems to be what we've been hearing for years: People want a purpose-filled life and work. For the first time, this made more sense to me as a feasible goal because Pink couples it with the other two concepts of autonomy and mastery.

Daily Dose Bottom Line: One thing this made clear is that there is a huge mismatch between what science knows and what business does. Yet whenever there is a gap, it means there is opportunity. The companies that understand how to motivate the workers of tomorrow will be the ones that "drive" us forward.  Highly recommend for anyone managing creative types.