Franchises inspired by the Hooters model--such as Celtic-themed sports bar chain Tilted Kilt Pub & Eatery and faux mountain sports lodge chain Twin Peaks--have expanded rapidly over the last half decade, while corporate-owned chains like Brick House Tavern + Tap and Bone Daddy's House of Smoke are picking up steam regionally. In fact, for the next couple of years, this segment (often referred to as "breastaurants") is poised to be one of the fastest-growing restaurant categories.

Sales figures for this specific niche aren't available, because they are lumped in with the broader casual dining segment--and numbers for the privately held companies aren't publicly reported--but sales at Hooters alone have increased in the last couple of years and average $1 billion annually.

The concept has grown in spite of the recession by focusing equally on upscale comfort food, full bars with extended beer choices, a full menu of sports on TV, and waitresses in tight shirts and short shorts. But the most important aspect of these restaurants is the same element that powers most successful eateries: customer service.

Why is this segment so popular? "It starts with comfort," says Darren Tristano, executive vice president of Technomic, a food-industry consulting firm in Chicago. "These concepts are growing by offering a different level of service and attentiveness.

They provide a service to men who may not have a person at home to take care of them in the same way. That's important to a number of people, and it drives them back."

It's hard to say exactly why these public man caves took hold in the last few years. Some think a shift away from political correctness or toward a more sexualized culture made the concepts more acceptable. Others believe that as Hooters sales flattened and expansion stalled, like-minded entrepreneurs saw a niche that wasn't being filled. 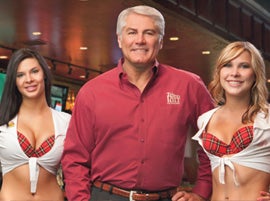 Ron Lynch, CEO of Tilted Kilt, stands by the concept.

Ron Lynch, CEO of Tempe, Ariz.-based Tilted Kilt, thinks his concept has been well-received because customers were ready for something new.

"Friday's, Chili's--those kinds of concepts came to be very similar in menu and look because they were chasing the same dollars," Lynch says. "When we sprang up, people were looking for something different."

That's what attracted Lynch to Tilted Kilt in the first place. In 2003, Harrah's in Las Vegas asked restaurateur Mark DiMartino if he had a concept for a space in the Rio Casino. He came up with the Hooters-goes-to-Scotland concept that is still the restaurant's theme. When Lynch--an area developer for Schlotsky's Deli--saw the place in 2005, he was hooked, and approached DiMartino about buying the franchise rights. By 2006, there were three Tilted Kilt franchises in the system. The concept has doubled each year. Lynch estimates Tilted Kilt will have 80 units open by the end of 2011, with another 70 deals for new spots in the pipeline.

There's a lot more going on at the Kilt than just men watching women, Lynch says, pointing out that one of the company's key offerings is "sports-viewing excellence," which translates to 50-inch plasma TVs throughout the restaurant, a full bar with a minimum of 24 beers on tap and a menu that ranges from inexpensive snacks to $19 steaks.

But he acknowledges that the cornerstone of the restaurant is the Tilted Kilt waitress. "We make no bones about it--that's what brings people in," he says. "We sell on sex appeal, but we are sexy classy, sexy smart or sexy cute. Not sexy stupid or sexy trashy."

Randy DeWitt had the same idea back in 2004. After growing his Rockfish Seafood Grill franchise too quickly in the Dallas area, he was faced with having to shut down stores. But instead of writing the locations off, he drilled down into the data and realized that while casual dining was tapering off, Hooters and similar concepts were doing well.

That's when he came up with Twin Peaks, a franchise based on a mountain lodge theme, where the girls wear plaid tops, suspenders and hiking boots.

"I knew guys like me would like a man cave where the waitresses are pretty and friendly, and we thought we could create a concept sufficiently differentiated from Hooters," DeWitt says. "I thought Hooters had taken the low-brow route, and we're taking the high road. We have higher-quality food, and the uniforms on our girls are more finished. Hooters is more blue collar. We do well where Hooters isn't accepted."

DeWitt's experiment worked, and he soon began converting more of his seafood restaurants into mountain lodges. Now Twin Peaks has 14 locations, with two under construction and five more in development. 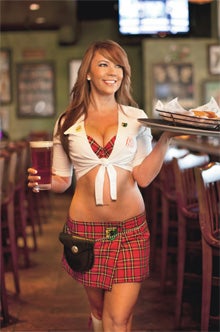 What makes the restaurant stand out, besides the waitresses, DeWitt says, is its commitment to quality. All mugs are frozen, and a special draught system ensures that every beer pours at 29 degrees. They have a full line of top-shelf whiskey, and their skilled bartenders know their booze. The food is all fresh--even fryer items like mozzarella sticks, which are hand-cut, breaded and cooked to order.

But as restaurant consultant Tristano indicates, the true differentiating factor of the modern "breastaurant" is service. Most customers aren't satisfied with brusque service--they want a conscientious server and a meaningful connection.

"Everybody else is rushing toward technology with kiosks that you order off of and servers who slip food to you around the corner. We're going the other way," Lynch says. "One of our mantras during training is that we want to make a connection with our guests. We practice 'touchology,' which means touch the table often, and make guests feel at home. Sometimes waitresses are providing the best part of a guest's day."

Twin Peaks' DeWitt agrees that fostering connections is the key to a restaurant's success, especially when it breeds repeat customers. In fact, some waitresses become mini-entrepreneurs on their own, using Facebook or Twitter to let regulars know what shifts they'll be working or what specials the restaurant is offering.

"When we see regulars walk in the door for lunch, the hostesses and waitstaff greet the guy by name," DeWitt says. Regular customers often ask for certain employees to wait on them, he says, and waitresses are instructed in how to connect with guests.

"We have a certain language and we train that among our waitstaff," DeWitt says. "If you ask for a beer, the waitress will ask 'Do you want the man size or the girl size?'"

Tristano confirms that the servers drive the concepts. "The increased service is absolutely the core, not the food," he says. "I suspect a lot of this segment's success has to do with server training and hiring the right people."

Though this segment of the market is definitely heating up, none of the concepts thinks they are in danger of saturation, especially since their numbers are fairly small and they're not targeting the same geographical areas. Instead, they worry about competition from sports-oriented concepts like Buffalo Wild Wings. In fact, DeWitt says today's market is similar to the one from which Hooters emerged in 1983.

"It seems like Hooters had the whole segment to itself back then, but if you do the research, they had a raft of competitors that popped up--often with really crass names like Mugs 'N Jugs--before Hooters emerged as a clear national leader," he says.

DeWitt is wagering that most of his competitors in the male-bastion market will try to grow too fast and flame out at the regional level.

"Every concept wants to grow and be nationwide, but you have to lay in the infrastructure for growth before going into build-out," he says. "You have to bring in highly talented operators that can manage rapid growth. We're not trying to grow faster than we're capable."

The concept is still evolving. Brick House Tavern + Tap--owned by Ignite Restaurant Group, the company behind Joe's Crab Shack--touts itself as the ultimate man cave, with more than 70 beers, alcoves filled with theater-style seats outfitted with trays where customers can watch the game with friends, and special 100-ounce beer bongs with their own taps. So far, the concept has opened in seven states.

As innovative as they might be, can these concepts survive if they cater only to half the population (and the one that doesn't always choose where to dine)?

"I think these concepts have to target women to be successful," Tristano says. "One third of their customer base is female, and they have to make an effort to make women feel comfortable."

Lynch thinks Tilted Kilt, at least, is succeeding with the female demographic. "I characterize ourselves as very PG-13," he says. "When a guy empties his pockets on the dresser and his wife sees a Tilted Kilt receipt, it's going to be fine. I was surprised when franchisees started asking for high chairs. We are no threat to women, and we train our servers to make a connection with women at the table first."

Although the women may be on board, there's no question that these concepts cater first and foremost to manly appetites.

"Why do regular customers come in three times or more a month?" DeWitt asks. "What more could a guy ask for: great food, sports, beer and a cute girl to look at. We don't go real deep."