Business and a Beer: An Entrepreneur Roundtable

Food, brew and wisdom: We assembled a diverse group of entrepreneurs to talk about recipes for success.
Next Article Add to Queue

Two bankers, the creator of an electric airplane and a granola-maker walk into a bar … No, it's not a joke. These innovators and financiers were all part of the brain trust that gathered for Entrepreneur's first Business & a Beer event, held March 10 at the bustling Euclid Hall Bar & Kitchen in downtown Denver.

We put a diverse group of entrepreneurs around a table, gave them good food and great beer and asked them to tell their stories, share their challenges and offer their advice. What transpired was a rich montage of insight from all levels of the entrepreneurial field: people who are just beginning to find their ways, seasoned veterans who have been there and done that and financial backers who have seen it all--and who know what's going to fly and what's going to fail.

The setting was also a character: Euclid Hall Bar & Kitchen, in Denver's LoDo district, is the brainchild of Jennifer Jasinski and Beth Gruitch, two successful restaurant entrepreneurs who also own local hot spots Rioja and Bistro Vendôme. The establishment offered up a wide range of local fare for the business-hungry minds around our table, including brûléed bone marrow in a sherry reduction, and mussels steamed in Trippel Belgian Style Ale from the New Belgium Brewery in nearby Fort Collins. The entrepreneurs washed down each other's input with brews ranging from a Hoss Rye Lager from Denver's Great Divide Brewing Company to a Left Hand Milk Stout crafted by Longmont's Left Hand Brewing Company.

Why Keeping a Business Idea Secret Can Backfire

Our assembly of entrepreneurs explored everything from funding to failure, sharing a wide range of insight on topics like how to stay adaptable, the importance of a business plan and making sure you have the right team. The connective tissue for everyone around the table? A penchant for innovation, experimentation and excitement. And a willingness to talk about it.

"It's true whether you're building an airplane or in the digital space: You need to focus on the core elements of innovation," says Marc Zawel, co-founder and CEO of EqualApp. "Starting a business is challenging, stressful and emotionally draining. You can't be scared to share your idea." 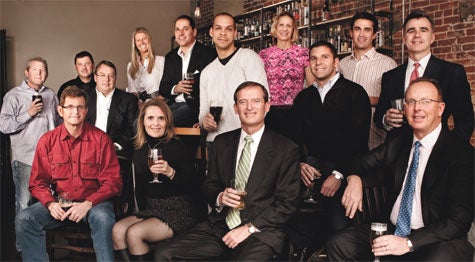 Andrew Schuman turned Hammond's Candies, a 90-year-old company making candy but not money, into a profitable enterprise by playing up its identity. "There's not a ton of innovation in candy--it's corn syrup, sugar and water. What I liked about this business was the old-fashioned, nostalgic brand."

Mark Shoemaker's eco-story customizes replacement lighting for restaurant and retail shops. "We sit down with each of our customers, listen to what they need and build a product to that specific need."

Nicolas Benedict, whose eScience Labs created a niche by making lab kits for students taking online courses, says team is everything. "You don't need a lot of MBAs or 40 years of experience. You need people who are bright and excited and believe in what you're doing. They will do amazing things for you, and they will set you up to grow."

UsingMiles.com founder Krista Paul found a way around the money. "Don't wait for the money, because it might never come. Figure out another way to do it, and just get started."

Tony Aiello, CEO of Lifestyle Wireless, has no small dreams--but he's practical. "Think big even when you're small, and get a good lawyer and a good accountant."

Garren Givens is the founder of CampusDibs.com and the new Dibsie.com. His approach to the daily deal sector evolved with advice he sought out. "Talking about your business is crucial to getting feedback about your idea and helping you to hone your pitch."

Former pro tri-athlete Nicole DeBoom took every bit of advice she could when forming Skirt Sports. "The first thing I did was have meetings with tons of people. It was like, ‘If I can fit in four coffee meetings a day for a month, I'm in good shape--and I'm wired.'"

Brandon Bailey withstood a lot of criticism when he was getting ready to launch Bulumu. "When we were telling people that we were going to start a natural foods company and start with granola, they would laugh in our face. It is
a test."

Timothy Keating, the pragmatic CEO of Keating Capital, offers what he calls his $149 piece of advice: Invest in software to help you create your business plan. "Ideas are a commodity. It's execution and validation. The ideas in and of themselves are interesting, but they're insufficient."

Having started four banks--the latest being Denver's First Western Trust-- Scott Wylie can spot the difference between ideas and action. "A lot of people see things that need to be done. To me what's different about entrepreneurs is a willingness to act on it."

Marc Zawel's EqualApp, which guides college applicants through the process, has morphed significantly since launch. "You need to be agile and listening to your market. That's one of the core advantages of being a startup: You can make changes quickly based on what you're hearing."

George Bye, CEO and founder of Bye Energy--which is equipping Cessnas with electric engines--says airplane engines gain a five-fold benefit in operating costs by going electric. "We focus on short endurance missions like training, where we fly just for an hour. We're building a backbone for what comes next."

Caren Griffin, owner of a multicultural spa called Spa Universaire, considers financial types the most honest. "People will tell you what you want to hear. The money people are going to tell you the truth."

Gary Mesch of Alpine Angels knows that the majority of ideas don't work out of the gate. "Most businesses are plan B or plan C. Ultimately, the customer tells them what kind of business they have."

Dawn of a New Decade -- Rise of the Hero CEO

How to Stay Motivated When Things Get Tough and Stressful

The 3,000-Year-Old Lesson in Executive Mentorship