How to Dress the Part As an Entrepreneur

Is it better to overdress or underdress?

Weird question, first of all. Because it implies that looking stupid is a certainty, so you might as well pick in which way you will look stupid. Also, it's a little repressive. T-shirt or suit. Shorts or khakis. Hoodie or opera cape. It's like having to pick salt or pepper. Or Salt or Pepa. Why must one choose?

Fine: It's better to overdress. Because by overdressing, you don't at first appear lazy. (If indeed you are lazy, why not push off the inevitable?)

"The first question you have to ask is, 'Can this be interpreted as a sign of disrespect?'" says Jay Adelson, CEO of geo-location startup SimpleGeo (and former CEO of social news website Digg). "And if that box is checked, I'm going to dress up. It's a sign of intelligence."

Because clothes represent propriety. When you present yourself, your clothes connote either thoughtfulness or thoughtlessness. When you overdress, you have a better chance of ending up on the right side of propriety. Early on at least, your clothes are your agent. If your agent is a jackass, you still might get the gig, but why give yourself so much to overcome?

The people of the West Coast of the United States have, over the last 30 years or so, joined together in a concerted effort to make wearing jeans and T-shirts appropriate business attire. Apple started the trend around 1977--Steve Jobs in jeans, T-shirt, Birkenstocks. Then HP followed suit to compete for engineering talent. (Bill Gates likes to claim credit, too.) Anyway, these companies changed everything. They made dressing casual an emblem.

"I'll never be called an empty suit, because I don't wear suits," says Mike Repole, creator and co-founder of Vitaminwater and a major investor in Pirate Brands (makers of Pirate's Booty). "Ninety-nine percent of the time I'm in jeans, flip-flops and a T-shirt. Wearing a hat on backwards and jeans to a wake is disrespectful. Otherwise, the way you dress is the way you dress." Casual is now a virtue.

Strange thing is, even though casual dress is a workplace reality, we still think about style in terms of formality: The further you move along the scale of style, the more and more "dressy" the clothes become. But if you think of dressy clothes as being at the top of the totem pole, then you tend to dress "up," which can be a horrible choice. Wearing clothes that feel stiff makes you look stiff--like an impostor.

"We want people to be themselves," says Jeff Clavier, founder and managing partner at seed-stage VC firm SoftTech VC in Palo Alto, Calif. "An investment will potentially be for five, seven, 10 years. The last thing I want is to have someone show up in a suit and a tie when it's clear they're not used to it."

Sometimes there's even more at stake: "If a developer or a CTO or co-founder of an early stage company came in wearing khakis and a long-sleeve button-up, that would send a message to me about the type of developer they are," says Matt Meeker, co-founder of Meetup and Polaris Venture Partners entrepreneur-in-residence at the New York City location of startup incubator Dogpatch Labs. "It would say they shouldn't be starting a company--they should find a corporation to do their development."

So why isn't our way of judging clothes aligned with our personal relationship with them? Why isn't the scale of dressiness not a hierarchy of formality but a hierarchy of casualness? Because if you're dressed appropriately (in clothes that look good on you and that you feel good in), you always feel casual. Always. You can be wearing a $5,000 suit and if that suit fits you well, you'll feel relaxed.

The Endorsement: A Jacket
So, casual is a way of thinking, not a way of dressing. But that doesn't mean you can't keep a tool at your disposal. Something that helps level the playing field before you're even in the room. "I have a classic, navy-blue blazer that I keep around the office," Meeker says. "If I'm meeting with entrepreneurs, I wear jeans and a T-shirt. But if I meet with investors or corporate types, I throw the blazer on. It's versatile and simple."

What Meeker is talking about is one of the most useful tools of business: the reserve jacket. A two-button blazer. (Not brass buttons, unless you're conducting business on a yacht--that you own.) Navy blue. Or charcoal gray. Tailored--snug when it's buttoned, showing a little shirt cuff. (All jackets are ill-fitting until they're tailored.) And let it not be a suit jacket that you've divorced from its matching pants. When paired with, say, jeans, a suit jacket creates a "party below decks" look that is not desirable. Your jacket should be its own thing, and as such it will work with everything: jeans, khakis, sneakers, whatever. (Except shorts--unless you're still on the yacht.)

If you work out of a suitcase, always pack the jacket. If you drive around most of the day, keep it in your car. But have that jacket at your disposal.

The jacket allows for so much. It stores things--various devices, breath mints, papers you might want to dramatically spring on people. It hides things--shirt wrinkles, sweat stains, sharply sloping shoulders. But more important, it suggests things--that you aren't lazy, that you aren't stupid, that you aren't the kind of person who takes things for granted. That you and your idea--or your company or your debts or your overhead costs--might not be exactly the right fit, but at least you're trying. Which is the whole point.

The Taxonomy of Casual
A breakdown of dressing down, dressing up and not looking stupid 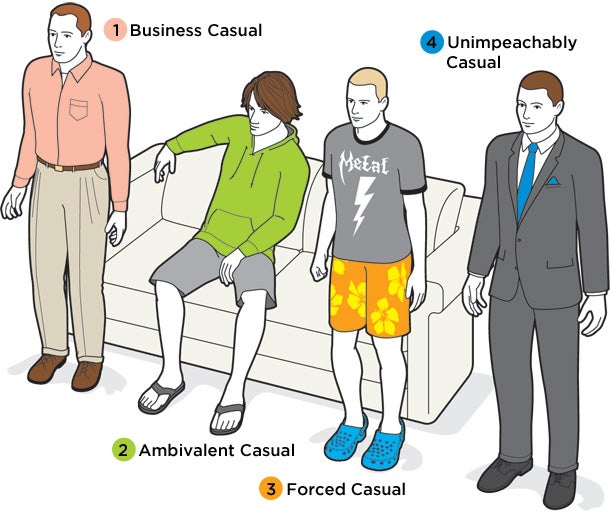 2) Ambivalent casual: Zuckerbergian. Like, a hoodie. A pair of shorts. A pair of flip-flops. All set against a worldview that somehow allows for being both wide-eyed and smirky. To pull this off you have to be really good. Really good.

3) Business casual: A now-meaningless term left over from the '80s. It involves pleated pants, wrinkle-free button-downs and a bit of fence-walking that is not recommended.

4) Unimpeachably casual: Which is to say: appropriately casual. Which allows for "formal." Which is ironic. Which means: Now is the point of the discussion when we must look to the Italians. There's this helpful Italian concept called sprezzatura,which dictates that perfection comes from the slightly imperfect. It's an old idea that was reintroduced to the world in 2006 by Esquire Fashion Director Nick Sullivan in the original Big Black Book, Esquire's biannual style manual. It allows for whimsy, messiness, flaws. Your tie is askew. Sprezzatura! That pocket square seems unnaturally bulbous. Sprezzatura! You're wearing your company-logo golf shirt inside out. Sprezzatura, man! Sprezzatura promotes a sense of style but allows for comfort, individuality, even ambivalence. What the Italians are saying is (and this is a loose translation): "Give a s***. But only up to a point." Sprezzatura lets you look formal and casual at the same time. (Another helpful thing Sullivan taught us: "Always cut. Never pull." He's referring to the occasional stray string, but it's a useful metaphorical notion for business.)