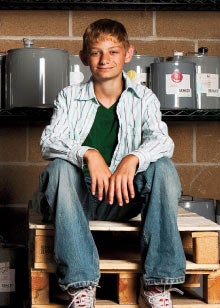 "Aha" moment: Main's 12-year-old sister was selling candles for a school fundraiser, and he teased her about the girly scents, telling her it would be cool if there were "men-scented" candles: "I thought, grass, bacon, sawdust, leather," he says.

What possessed him: "It started out as a joke," Main says. "My sister really didn't think I would do anything." But to prove he was serious, Main put $100 of his own money into the endeavor, and his parents put in about $200--with one stipulation: If he wasn't able to pay them back with money earned from the candle business, Main would have to reimburse them from his paper route earnings. Main admits he was also motivated because he wanted a road bike for triathlons (which he purchased within a month of selling ManCans).

What's that smell? Current offerings of ManCans include Sawdust, Coffee, Fresh Cut Grass, Campfire, Bacon, Grandpa's Pipe, New Mitt, New York Style Pizza and Dirt. New scents are created mostly by request, Main says--and there have been some odd ones, like cow manure (when asked if he's going to oblige, Main replies, "Um, no."), and steak or meat scents.

Marketing: "I started out in Marysville by walking into stores and just saying, ‘I made these candles, can you carry them in your store for consignment?'" Main says. "A lot of them did." Main heard no plenty of times, but still got his product into a few local stores, as well as 60 others across the country. Most sales, he says, are made on Man-Cans.com. So far, about 9,000 units have sold nationwide.

Group effort: Main and his family buy full soup cans from the grocery store and take them to soup kitchens to be served. About two weeks later, they get back the empty cans to use for the candles. Originally, Main's family helped make the candles--a soy wax blend--but production has since been outsourced to an Ohio candle maker, with Main overseeing the process.

Up next: Main will focus on school in the fall, but says he'll stick with ManCans at least until all orders are filled. "It's more work than I thought, but I'm glad I started it," he says. "It's been a good learning experience. It's taught me a lot about what it takes to start a business and a lot about what I'm interested in."