Maestros of Malt: How Five Craft Brewmasters Got the Beer Bug

By Diana Ransom November 23, 2011
Opinions expressed by Entrepreneur contributors are their own.

Competition is heady in the craft beer business these days, with more than 1,700 breweries in the U.S. and more than 50 in the Portland, Ore., area alone. Still, pioneers and newcomers alike say the pleasures easily outweigh any perils. We spoke with five craft brewery and brewpub owners in the Portland area to find out how they got the beer bug and how they’ve found a competitive edge.

For some people, making beer is a calling. For others, it's simply a good business opportunity. Irene Firmat, 53, moved to Portland from New York City in 1981 to work at a local department store as a fashion buyer. As an avid beer consumer, she couldn’t help but notice the growing prevalence of craft beer after the Oregon legislature legalized brewpubs in the early 1980s. She also saw a missed opportunity: Most brewers weren't bottling their beer but were shipping it in kegs to nearby pubs.

In 1987, Firmat launched Full Sail Brewing in Hood River, Ore., at the foot of Mount Hood, about an hour's drive from Portland. By 1989, Full Sail had become the first craft brewery in the region to successfully bottle its beer to sell through retail outlets. "It was a marriage of business opportunity and a desire to see how I could do," Firmat says. "But also I love beer, so it made perfect sense to me." Today, Full Sail has expanded well beyond the Portland area, shipping its beers to retailers throughout the Pacific Northwest and on the East Coast. In addition, Full Sail has produced and bottled the Henry Weinhards seasonal beer for MillerCoors since 2003. Although Full Sail faces more local competition than ever, the company continues to outpace most of its rivals. Firmat credits the continued growth partly to the fact that Full Sail’s employees have owned the company since 1999 and are deeply vested in its success.

Alan Sprints infuses some of his Hair of the Dog beers with fruit and lets them age in wine or brandy barrels, which he can then sell for more money.

Alan Sprints moved to Portland from Los Angeles in 1988 for the food, but he stayed for the beer. Upon graduating from culinary school in Portland, Sprints spent the next few years working at a series of restaurants. Then in 1991, he tried his hand at brewing--taking a job at Widmer Brothers Brewing, one of the biggest in the area.

Like many entrepreneurs, Sprints decided that if he was going to put in long hours for what he deemed little in return, he might as well work for himself. In 1993, he started Hair of the Dog Brewing and gave it a different spin. Unlike other craft breweries and brewpubs in the area, Sprints exclusively makes and serves dark beers with rich flavors and high alcohol concentration. He also infuses some of his beers with fruit and lets them age overtime in wine or brandy barrels, creating a more complex beverage that resembles liquor. "Then I have a value-added product that I can sell for more money," says Sprints, who will disclose only that he is about 50 years old. Although Sprints says the special beers are profitable, he isn't sure how profitable. "It is hard to calculate how much I really make considering the investment in time and money and experiments that don't work out," he says. Oregonians snap up most of his creations, but Hair of the Dog brews also are sold in eight other states.

Longtime friends Gary Geist and Alex Stiles played in the dirt together as toddlers and traveled to Europe as teenagers. Later, they worked together at BridgePort Brewing Co. in Portland for nearly two years. Geist focused on the business side, while Stiles learned his way around fermenters and kegs. They had talked about starting up a brewery together many times over the years and finally took the plunge in 1994 with Lucky Labrador Brewing.

By then, Portland had already become a hotbed for craft breweries, but after six months of studying the market, Geist, now 45, concluded there was still plenty of growth potential. He believes Portland is much like such famed beer-drinking enclaves as Munich and Prague. "In Europe, there are a lot of regional beers," he says. "You can go to one area and choose from a spectrum of different kinds of beer. It's the same in Portland. Like going to Munich, this is the place where people [in the U.S.] come to drink beer." But to ensure that Lucky Lab itself became a key destination, Geist -- who manages the overall business while Stiles heads up the brewery -- says he focused on marketing the pub and creating a convivial atmosphere. While the food is anything but gourmet, beer gardens, a pet-friendly policy and beer specials have helped Lucky Labrador grow. It also has benefited from being a pit stop on Portland pub tours and even having its own biking event -- the Tour de Lab.

Video: How to Tap into a Competitive Market: The Craft-Beer Business in Portland, Ore. 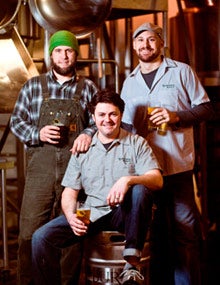 As co-founder of Burnside Brewing Jason McAdam (left), mixes ingredients like oatmeal and coriander into his beers.

Born and raised in Portland, Jason McAdam has been around beer half his life. He bought his first home brewing kit at age 18, and four years later, landed his first professional brewing job at Oak Hills Brewpub in Portland. He spent the next seven years there and at another brewery in Troutdale, Ore. By 2004, he felt ready to start his own brewpub, which he named Roots Organic Brewing, and co-founded with a friend in Portland. "It's a way of life for me," says McAdam, now 36.

Related: How to Tap into a Competitive Market: The Craft-Beer Business in Portland

But it wasn't until he launched his second brewpub, Burnside Brewing, in 2010 that he was able to turn beer making into an art and the kind of stuff foodies crave. McAdam -- who runs Burnside with two other partners -- often blends ingredients like coriander, oatmeal and apricot puree into his beers. He even uses Hama Hama oyster liquor from Washington state in one of his seasonal ales. "We wanted to reimagine the standard pub," he says, noting that in addition to the food-infused beers, the burgers are served on brioche and Burnside makes its own sausage. Another twist to the menu: McAdam sometimes whips up vintage beer blends, such as Berliner Weisse, a sour wheat beer from Northern Germany that dates back to the 16th century.

Brewing beer doesn't run in McKean Banzer-Lausberg's family, but entrepreneurship does. His mother and stepfather started Sports Car Market magazine, and he developed his own Web design business in 2006. Then came Migration Brewing, which the 34-year-old native of Portland co-founded in 2010 with his brother Eric and two other business partners.

Before creating Migration, Banzer-Lausberg worked as a pub manager and bartender at Lucky Labrador Brewing for more than four years. But he knew entrepreneurship, not management, was his true love. Yet in the overflowing craft-beer haven of Portland, an entrepreneurial spirit isn't enough. To try to stand out, Banzer-Lausberg and his partners host area meet-up groups and provide live music. Migration's founders also recently sponsored and participated in an adult soapbox-derby race at nearby Mt. Tabor Park. "We're trying to be as integrated as possible in the community," says Banzer-Lausberg. "We want the Migration experience to be what's different in the marketplace."