1. Brew master
West Los Angeles got its first taste of siphon-brewed coffee in 1997, when Ray Sato opened Balconi Coffee Company. Each cup at the coffee bar was painstakingly made in a Japanese siphon, using a traditional method involving vapor and vacuum pressure in two glass chambers.

Things were going pretty well as a cash-only business, but when Balconi's lease expired in 2008, Sato decided to upgrade. "We started fresh," he says. He moved the coffee bar to a bigger space on a busy corner and designed the layout from scratch.

When Balconi reopened in January 2011, something else was different: Instead of a cash register, the shop was equipped with a new iPad and a Square reader so Sato could accept credit cards and more easily sell grinders and other high-priced merchandise. "I wasn't expecting people to use cards for smaller charges, but about half of my sales are through credit card now," he says. 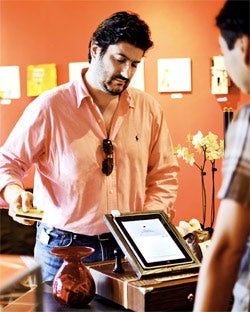 Sato had shopped around for point-of-sale systems but balked at the $3,000 to $4,000 price tags. When he saw Square being used at another coffee shop, it suddenly clicked. "It had that 'wow' factor,and the only setup cost was basically the price of an iPad. It made sense to invest $500 over $4,000," he says, joking that his only challenge was figuring out how to use the iPad. With Square, he pays 2.75 percent per swipe and 15 cents plus 3.5 percent for keyed entry.

These days, Balconi's revenue is higher, and Sato says Square provides room for new opportunities. "If I was to do catering, I could see how it would be helpful to accept payments off-site," he muses. "It's nice to know that's a possibility."

2. Bull market
Lance Bloyd (left) doesn't have a physical storefront for Bucking Bull Pro, which sells products to the bucking bulls industry. "People find me online, call and I take their orders," he says. 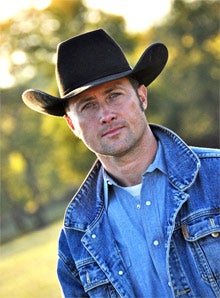 There were some problems with his system, which at one time involved sending an invoice along with orders, then waiting for customers to pay by check. "I found you have to bug them, which is uncomfortable to do, or you can't trust them to pay, even if I overnighted it because they needed something that weekend," Bloyd says. Eventually he began demanding payment upfront, which resulted in some lost sales. Further, part of his business comes from selling products at bull-riding events, where he could only accept cash or personal checks.

Bloyd needed a way to accept credit cards, and a system that would work wherever he went. He discovered AppNinjas' Swipe service through an iPhone app commercial. He pays $24.95 per month to use the system, as well as 24 cents plus 2.29 percent when he keys in a credit card number for mail-order sales, or 24 cents plus 1.74 percent when he uses the swipe method. He also gets a dedicated customer-service specialist (aka "personal ninja"). "I probably use it 10 to 20 times a day during an event," he says.

Swipe not only allows Bloyd to accept credit cards, it also has simplified his accounting process. As the sole proprietor of Bucking Bull Pro and a full-time firefighter, he doesn't have a lot of time to spare. "Once I got through the setup process, I've been really happy with the service," he says. "I know I pay a monthly fee and a percentage on each transaction, but to tell you the truth, I don't even open up the statement."

Related: Three Steps for Getting Started in Mobile Commerce

3. Cutting edge
Like many hair stylists, Duane Schneider is an independent contractor who has to address the administrative headaches of all small-business owners, including payments. In August 2010, he began working at Denver's Star Salon, where each stylist is in charge of his or her own transactions. 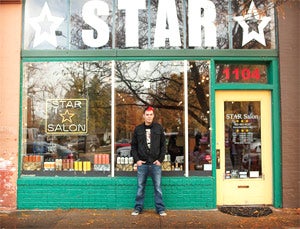 Figuring out a traditional credit card system was tricky, he says: "There were all sorts of hidden fees, and percentages changed based on income and type of credit. I was freaking out while researching merchant accounts."

After learning about mobile systems, Schneider signed up with Pay Anywhere. Since then, he says, sales have tripled. "Ninety-seven percent of my clientele use cards, because it's definitely more convenient than going to the ATM or bringing a check--or telling me to wait until Tuesday to cash the check," he says, adding that he is also able to take payments for services conducted off-site, such as a haircut at a hotel. 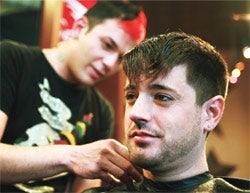 Pay Anywhere charges 19 cents plus 2.69 percent per swipe, or 19 cents plus 3.49 percent for keyed data; it also allows merchants in places without an internet connection to store card info for processing later. Schneider loves the fact that he did not have to sign a contract; he's also pleased that he can get a Pay Anywhere rep on the phone 24/7.

"I haven't seen other people in the area use mobile payments, but I've spread the word a lot," he says. "My fees are nowhere near what my co-workers pay, and they think it's amazing--but they're all in contracts."