Three Ways to Use QR Codes for Business 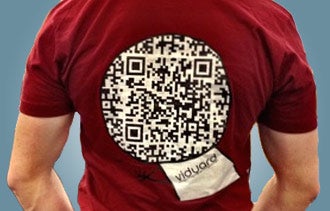 Acceptance of quick-response (QR) codes--those square bar codes that connect consumers to a website, video or special offer--is increasing at a rapid clip. Digital market research firm comScore found that roughly 20.1 million people scanned QR codes with their phones in a three-month average period ending October 2011, vs. 14 million in June 2011. As the technology grows more popular--and websites such as Delivr.com, qrcode.kaywa.com and QRStuff.com make it easy for even small-business owners to get onboard by generating QR codes for free--placement and functionality of the technology is getting more creative. Here's how a few 'treps are putting them to use.

Scans into leads
When WebiMax, a Mount Laurel, N.J.-based search engine optimization firm, placed its first QR code on a banner at the 2011 Search Marketing Expo in New York, company founder Ken Wisnefski was impressed that it was scanned by 250 people. That led him to refine his QR strategy to track people who arrived at the company's website via seminars, trade shows or marketing materials. WebiMax has also embedded its e-mail within the code, so scanners can immediately contact the sales department.

QR-logo mashup
With the release of each new book, LJS&S Publishing in Orlando, Fla., plants QR codes on posters, mugs, yo-yos and T-shirts to help market the work. For the company's new science-fiction thriller The Immune by Doc Lucky Meisenheimer, the company went one step further and inserted an image adapted from the book's cover into the center of the QR code. The code became both a graphic illustration and a working link to the book's website.

Bumper stickers
Mike Podlesny of Burlington, N.J., experimented with a QR code on a bumper sticker to promote his gardening business, Mike the Gardener Enterprises. The code links to his "Seeds of the Month" YouTube video. Podlesny offered the free sticker to fans on his Facebook page--4,000 requests and counting--and the video has since notched 1,200 views.

One-stop connection
Gina Freize, founder of Venissimo Cheese, which has four Southern California locations, uses QR codes as a way for people to quickly subscribe to the company's Facebook page, online newsletter and to each individual store's Twitter feed. Freize says the codes brought approximately 100 new contacts and subscribers to her customer database within six months.