Five Things to Do Before Your SXSW Launch 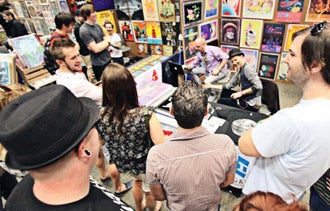 For new tech companies, a good showing at Austin’s South by Southwest Interactive festival can carry you down the path to startup glory.

Consider Twitter, which launched in the summer of 2006 with “a whimper,” according to cofounder Evan Williams, writing a Quora response. Nine months later, with the help of big-screen TVs and a scrolling Twitter feed that caught the attention of early adopters at SXSWi 2007, a social-media star was born.

And let’s not forget the launch two years later of Foursquare, the darling of geo-social apps. As part of his attention-getting strategy, co-founder Dennis Crowley drew chalk lines for an actual game of foursquare on the sidewalk outside the Austin Convention Center and played with random passersby.

Of course, these days it’s not so easy to cut through the noise, says Hugh Forrest, the director of SXSWi. The entire event was once contained on one floor of the convention center. Now, the programming spans numerous venues, including several big hotels.

So what’s an entrepreneur to do? “You have to embrace the occasional serendipitous meeting, but you must have a game plan,” he says. With only a few weeks left before SXSWi starts on March 9, here are five things to do before your launch.

1. Get your pitch ready.
Take the time to hone your message about who you are as a company and the vision you have for your product or service. You’ll need it for when you meet the venture capitalist of your dreams in the bathroom line at the SXSWi Startup Village -- a new area where special events for startups, such as Microsoft’s fourth annual BizSpark Accelerator Competition, will be consolidated.

“We spent weeks practicing our pitch,” says Ken Cho, co-founder of Spredfast, a social-media company in Austin and one of eight finalists (out of 200 applicants) in BizSpark’s 2010 competition. This year, 675 hopefuls have applied for the chance to show off their products in front of thousands of investors and industry experts.

Having a great five-minute pitch can be crucial, since there are so many connections to make with press, investors and potential customers. “We used the conference to network with as many people as we could, shared our ideas and got feedback on how to make our business better,” he says. The company closed a round of $1.6 million right after the buzz and quintupled employee count in 2011.

2. Target your outreach
Figure out all the social-media tools you’ll use to broadcast your SXSWi activities, whether that’s attending a panel, throwing a launch party or passing out promos. Find out who’s going – you can scan the list of attendees on SXSocial – and reach out for one-to-one meetings. Learning what key attendees want and like (especially at parties) will help you make a good impression when you finally get there.

Chaotic Moon, a mobile app development company in Austin, has maintained 500 percent year-over-year revenue growth after launching at the festival in 2010, and CEO Ben Lamm says that’s partly because the company threw a buzzworthy “crowdsourced” party. Prior to the festival, the team asked the SXSW community “where we should buy t-shirts, which bars are the best, which drinks to serve” – basically everything, he says. The result got industry leaders and fans talking.

3. Make activities authentic…
No doubt your planned launch activities are brilliant, but make sure they’re relevant and not too gimmicky, says Foodspotting’s head of outreach Fiona Tang, who organized the popular mobile app’s “street food fest” on Sunday last year, attracting about 4,000 attendees and positive press coverage, including a write-up on CNN.

“Foodspotting is all about helping people find good food, so this was the perfect way to introduce people to us,” she says, adding that employees came out a few days early to plaster stickers and event flyers around convention center entrances. “Finding ways to showcase your value is the best way to cut through all the craziness that is SXSW.” In Foodspotting’s case, the event went so well SXSW organizers are bringing it back this year at a busier time: Saturday night.

4. …And helpful
To make the longest-lasting impression, prepare to be as useful as possible to conference-goers. Last year, GroupMe’s co-founders Jared Hecht and Steve Martocci rented a space in front of the convention center and turned it into a highly trafficked grilled cheese and beer stand. “Who doesn’t love grilled cheese?” Hecht says, noting that the GroupMe Grill also became a hub for people to relax between panel sessions. If you haven’t rented space, you can set up shop anywhere in town (that’s legal to do so) and take advantage of foot traffic.

GroupMe’s group text messaging service eventually won the SXSW Breakout Award for representing the digital trend that gained the most traction during the festival and was bought by Skype late last summer. “The products that have breakout years are those that are built to help with the SXSW experience,” Martocci says.

5. Psyche yourself up
For newbies, a fact of SXSWi: You snooze, you lose. So do what you need to do to be mentally and physically on top of your game. “We all spent almost all of our time in Austin representing GroupMe,” Hecht says. “It was exhausting, but we wouldn’t have had the breakout experience that we had if everyone didn’t give 110% of themselves.”

Lamm agrees: “Go to every event, every keynote, take every meeting. When you go, go all in. Our Chaotic Moon typical conference day goes from 6 a.m. to 3 a.m. the next morning. When everyone is sleeping in, we’re at meetings. We want it more, so we work harder.”