By Shira Lazar April 5, 2012
Opinions expressed by Entrepreneur contributors are their own. 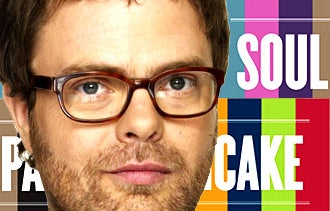 Many know Rainn Wilson as the hilarious, nerdy and often brazen Dwight on NBC hit show The Office, but over the past few years the comedian has been showing off his softer side.

Wilson co-launched SoulPancake.com in May of 2011 as a community website where members can ponder "life's big questions." It was a passion project, which has since grown into an outright brand and truly creative new media company. From the book SoulPancake: Chew on Life's Big Questions to his own show on OWN, the Oprah Winfrey Network, to creating his own YouTube channel, Wilson is building some serious entrepreneurial cred these days. Last April, the video site owned by Google announced that it would plow $100 million into creating original programming for the company's TV-style channels.

To explain the intricacies of SoulPancake, I sat down with Wilson. Here, he shares how he's grown the community and his insights on how media is all "melting into one entertainment blob":

Describe the world you enter on SoulPancake.com.
When we were starting, we thought it was just going to be a content site... us putting up posts of challenges, perspectives, interviews, and people would be taking in the content and maybe commenting. And then, at the last minute, we were like: no that's not right, let's put in this thing called the "Question Collective" where you can push your own life's big questions and comment on them. And of course people just stopped reading our content and started interacting with each other. You've got teenage girls from Dubuque, Iowa, posting life's big questions and people from Lebanon and Russia answering them. People from all over the world are engaging in some really deep stuff. But in a fun way, it's not boring or dry. It's visceral and philosophical. Philosophy is not some boring, academic pursuit that you just go to a class and write some dry dissertation on. This is what makes us human beings. So we wanted to create a forum for people to engage in that way.

What Google and YouTube are doing by investing in new ideas is putting themselves at the vanguard of that. They are saying: We don't need TV networks, everyone has high speed internet these days. So it puts us in this really interesting position where we're both making content -- like OWN, which is a production company -- and we're a network.

You're a comedian and entertainer, why ask people to ponder the meaning of life?
There are a lot of things we could've done to make more money on the web. I could have tried another Funny-or-Die-type of site or something goofier or crazier like that, but this is a passion project of mine. I see it as a service. I want it to be profitable, but I really want it to fulfill a need in humanity -- to uplift and inspire people and get them thinking about these questions of what it is to be a human being in a deeper, more profound and fun way.

How would you recommend entrepreneurs and brands similarly connect with people?
Give tools to the people and hope that they use them. But that has to be the paradigm, as opposed to we are going to do this and they are going to do this. You have no idea what people are going to do once they get on the old internet. Viewers and users need to feel that you're not just trying to profit off them in some way. It's like with my Twitter stuff, I get approached a lot about monetizing on it and I just don't want to do that. Now, I just sit down to take a poop and I have a funny idea and I tweet it out on my phone and some people laugh and millions of people block me and we just go on from there, but we have a good time.

What steps do you take to engage your customers with your brand online? Let us know in the comments below.