Scentsy and the Sweet Smell of Success

By Margaret Littman June 2, 2012
This story appears in the May 2012 issue of Entrepreneur. Subscribe »

Orville Thompson admits that, at one time, he was "a hack entrepreneur." He sold a variety of wares at fairs and trade shows, but he wasn't prepared for the post-9/11 recession. Bills mounted. He told his wife, Heidi, that he was thinking of declaring bankruptcy.

Anxious to prevent this--and unwilling to leave their creditors high and dry--Heidi urged Orville to keep trying. He found his next great hope, Scentsy, at a home and garden show in March 2004 in Salt Lake City. The ceramic warmers scent rooms like a candle but without the risks of an open flame; instead they heat wax with a light bulb.

"I did not understand," Heidi remembers thinking when her husband called her from the road to tell her about it. "He was always bringing things home, and they ended up in the junk pile."

But when she plugged in the machine, she was sold. Her house smelled like banana nut bread--no baking required. The Thompsons bought the company for an undisclosed price, with an arrangement to pay the founders over time as the company grew. (The founders also later signed on as Scentsy consultants.)

The Thompsons structured Scentsy as a direct selling firm, with independent "consultants" selling the low-watt wares at private home parties, online through personal websites and at fairs and shows. They focused on building a system for the company's growth, rather than on one-off sales. Users quickly became fans of the wickless candles; today many Scentsy customers have multiple warmers.

"A loyal customer is one of the things that really drives direct selling," says Joe Mariano, president of the Washington, D.C.-based Direct Selling Association. "People say, "Maybe I could do this, have this small business,' because they like the quality of the product." 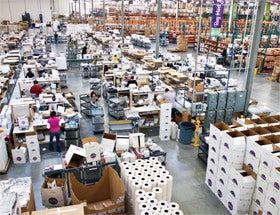 For many consultants, Scentsy generates more than just extra spending money. Of the top 20 salespeople, 15 have no other income stream. Scentsy has 170,000 active consultants worldwide, plus 952 full-time employees and 48 part-timers. Many executives were recruited from corporations, not other direct sellers or mom-and-pops. "We needed to transcend our shortcomings," Orville says.

Inventory is updated twice annually. Some fragrances are perennial sellers; new ones are put to a vote at Scentsy conferences. All products are sold exclusively through the consultants, with no retail shops.

With an army of independent salespeople, and no outside investors, the Thompsons expanded Scentsy to $535 million in revenue last year. But Orville is aware of the downfall of many direct selling companies: Once the product reaches a saturation point, the company flounders. The Thompsons hope to sidestep that problem by launching new products, including Layers by Scentsy, a line of scented laundry and personal-care goods that debuted in March. This month, consultants will also start selling a silicone fondue-style warmer that melts cheese and Belgian chocolate using Scentsy's warming technology. Orville predicts that with the boost from the rollouts, 2012 sales will hit $750 million.