Finding the Best Time to Post to Social Networks 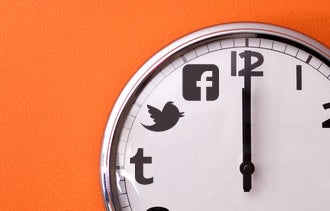 Managing social media for your business can be a tricky endeavor. Which pictures should you share on Facebook? What industry news should you tweet about on Twitter? What topic should you blog about on Tumblr?

And on top of knowing what to publish on which social network, another big question business owners struggle with is the best time to post. Publishing your content at peak times can help you reach the most people on those networks.

Turns out the best time depends which social network you're posting to, according to popular URL shortening service bitly. It tracks metrics on bitly links that are shared across networks. In particular, bitly has examined how the day and time something is posted affects how "viral" it might eventually become.

But each social network has its own "culture," bitly says, and users exhibit distinct behavior patterns. Here's a rundown of bitly's findings on the best times to post to Facebook, Twitter and Tumblr:

Related: How to Create a Social Media Content Strategy (Video)

Facebook: For the best click-through rate, bitly suggests posting to Facebook between 1 p.m. and 4 p.m. EST. Wednesday at 3 p.m. EST is the peak time of the week to post. Traffic from Facebook fades after 4 p.m. Weekend posts often get less attention than weekdays.

Twitter: Your best chance of getting high click counts on Twitter is with tweets sent in the afternoon earlier in the week -- namely 1 p.m. to 3 p.m. EST, Monday through Thursday. Bitly suggests users avoid posting after 8 p.m. or after 3 p.m. on Fridays. As with Facebook, weekend tweets are less effective than those sent during the week.

Tumblr: This social network has a "drastically different pattern of usage" than Facebook or Twitter, bitly says. Tumblr traffic from bitly links peaks between 7 p.m. and 10 p.m. EST on Monday and Tuesday, with similar traffic on Sunday. Friday evening -- a time that's generally ineffective for other networks -- can be an optimal time to post on Tumblr. On average, content posted after 7 p.m. receives more clicks over 24 hours than mid-day posts during the week.

What tips do you have for posting content on social media sites? Let us know in the comments section below.

What the Presidential Campaign Can Teach Us About Sales and Marketing

4 Ways Brands Can Be Activists for School Safety Right Now