By Jane Hodges June 13, 2012
Opinions expressed by Entrepreneur contributors are their own.

A smart storefront and the right location are vital in retailing, but commercial real estate in eye-catching urban corridors can be expensive and hard to find. Add to this a tough economy, and many startup retailers find themselves bunking up both to economize and build their businesses.

Metropolis
Terry Heiman, owner of Seattle-based card and gift shop Metropolis, got a lease with a clause allowing for subletting

Space sharing can offer benefits to retail entrepreneurs, too. Here's what some independent retailers have learned from their experiences.

Get a lease that permits subletting.
Terry Heiman, owner of Seattle gift-and-card shop Metropolis, moved his store into a bigger space in 2008, planning to expand his merchandise to include furniture and more big-ticket items. What he got instead was the recession.

Fortunately, he'd asked his landlord for a lease permitting him to sublet space to another tenant. The landlord agreed, as long as Heiman let him vet the tenants. Heiman advises other retailers to request a sublet option, too, just in case the need arises.

Metropolis began renting a third of its space to other retailers in 2009. The latest is pet-supply and gift store Zak & Zoe, which moved in last year. Heiman spent $1,000 to install a loft-style wall between the spaces, and each store has its own entrance, address and separate utility metering, making for easy division of expenses. He collects the rent and writes one check to the landlord each month.

Zak & Zoe co-owner Nadja Chorba Wiese and her partner jumped at the subletting opportunity after their landlord notified them of a pending $500 rent hike on their lease renewal. With little on the market in their immediate area, they feared that moving to a different neighborhood would cost them customers.

Ask a matchmaker.
Matchmaking sites for space sharing are sprouting on the Internet, but they cater more to service businesses than retailing. Shared Business Space, for example, charges $25 a month for a listing, but a recent search didn't turn up any retail opportunities.

Consult a broker.
Many businesses wind up in space sharing arrangements at a real-estate broker's suggestion. Jennifer Rossi, owner of MINDS Eye Bookstore, a shop selling books about metaphysics and alternative healing, turned to a broker when she wanted space in Mount Clemens, Mich., a community long associated with health and wellness because of its historic mineral baths. She hoped to open near a natural foods store or yoga studio, but ended up in closer quarters than she had expected with a complementary business. 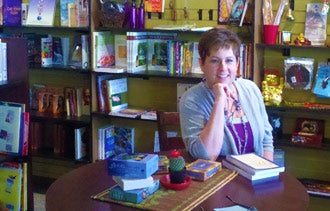 Jen Rossi runs a new age bookstore in Michigan that shares a building with a yoga studio.
Photo courtesy of the company.

The broker she contacted also knew of a yoga studio seeking space, as well as a downtown landlord hoping to rent an entire building in one transaction. The 4,000-square-foot space was bigger than Rossi or the yoga studio needed alone, but the location was good. So, the broker helped Rossi and Bodhi Seed Yoga approach the landlord about sharing the space. The landlord agreed, and each business secured a separate lease, negotiated its own tenant improvements, and took advantage of the building's separate entrances.

Integrate your space -- and your businesses.
Some retailers selling complementary products end up sharing more than space. 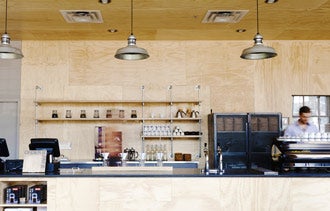 That's what happened with Atlanta's Octane Coffee and Little Tart Bakeshop. Their landlord suggested they team up in a 2,600-square-foot space within a warehouse conversion, and in October they opened their shared doors. To customers, it's one business because they can buy an Octane coffee and a Little Tart goodie in one place. But behind the scenes, Octane and Little Tart have separate leases with the same term and rent.

The retailers saved money by sharing the cost of a single contractor, and their complementary products help maximize store hours. Little Tart Bakeshop serves breakfast, lunch and snacks until 5 p.m., while Octane serves coffee all day and moves into the kitchen for small plates and bar service later in the evening. A sophisticated point-of-sale software program allows either business to ring up products in one transaction, then later reconcile which party logged which sales, Octane co-owner Tony Riffel says.

"The landlord kind of drove this because it meant he could lease out a bigger space," Riffel says. "We just wanted the experience to be seamless for the customer."

US Employers Added 210,000 Jobs in November, Less Than Half of Estimates