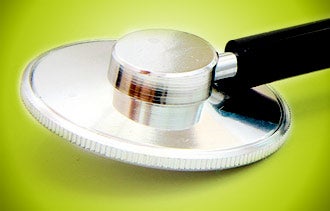 Thanks to the congressional debate over healthcare reform and the upcoming presidential election, the future of health benefits for small businesses is uncertain. Experts predict that a verdict won't be clear until the latter half of 2013.

But you can't afford to put things on hold until then. Health insurance costs continue to snowball. In 2011, the average annual premium for an employer-sponsored health plan was $5,429 per worker--an 8 percent increase over 2010, according to the Kaiser Family Foundation's 2011 Employer Health Benefits Survey. To compensate, more small businesses are passing these costs on to their employees.

That's what Kenneth Wisnefski, CEO of WebiMax, a rapidly growing internet marketing business, has done. The Mount Laurel, N.J.-based company saw revenue jump from $2 million in 2010 to $10 million in 2011, while head count expanded from 58 to 150. Wisnefski expected that the larger staff would lead to a company discount on healthcare premiums. Instead, just the opposite happened: WebiMax's premiums for the same plan rose by nearly 12 percent, an expense that was not sustainable.

Healthcare coverage is on the decline among small businesses: 59 percent of companies offered health benefits in 2011, down from 68 percent in 2010.

Although he hated to do it, in December 2011 Wisnefski stopped fully subsidizing his employees' healthcare premiums, a benefit he'd offered since he founded the company in 2008. Today WebiMax employees contribute roughly $100 per month toward their own healthcare coverage. For employees with family coverage, the monthly contribution is approximately $150.

"We would love to have them not pay for it at all," Wisnefski says, adding that he feels fortunate to be able to offer any subsidy. "In this competitive environment, it is a small price to pay."

At small companies of three to 199 workers, employees contribute an average of 15 percent of their health insurance premiums, according to the Kaiser survey. For family coverage, that figure jumps to 36 percent.

Embracing Higher Deductibles
Of course, passing the price of soaring premiums on to employees isn't the only option. A big trend is toward consumer-directed health plans (CDHP), primarily because they're more affordable, according to Mike Sullivan, executive vice president and chief marketing officer of Atlanta-based Digital Insurance, an employee benefits agency specializing in small and midsize businesses. CDHPs are "the big industry buzzword for higher out-of-pocket expense plans," he says.

A CDHP often consists of a health plan with a high annual deductible of $1,000 or more and a healthcare savings fund that an employee can use to pay permissible medical expenses. Small businesses are flocking to these plans like workers to the espresso machine. Last year, 23 percent of employees at small firms offering healthcare coverage were enrolled in a high-deductible plan with a savings option, according to Kaiser's 2011 survey. At firms of 200 or more workers, that number was just 15 percent.

Jeffrey Ingalls, president of the Stratford Financial Group, an employee benefits firm in Wayne, N.J., switched his 20-person staff to a high-deductible health plan in 2008. By taking on more of the insurance risk, he has been able to cut the company's health insurance premiums in half.

That doesn't mean Ingalls skimps on healthcare coverage. To pay out-of-pocket costs, each employee on the plan has a Health Reimbursement Account (HRA), which the company fully funds, providing $2,500 for individuals and $5,000 for families. Over the past four years, the company has typically paid 45 to 50 percent of all deductibles. "You have to provide the money only when somebody has a claim," Ingalls explains. The company's contributions to HRAs are tax-deductible, just like insurance premium payments.

This type of coverage won't suit all small businesses. Ingalls has seen this strategy work at companies insuring relatively healthy groups of two to 50 people, and at organizations that already had a comprehensive health insurance plan in place. Larger companies, less healthy groups and organizations switching from more bare-bones catastrophic health plans likely won't see the same results, he cautions. "You want to save enough money to fund the deductibles," he explains.

Rethinking Employer Responsibility
Despite such cost-cutting strategies, some small businesses are rethinking their role in the healthcare game. "Companies are trying to understand, ‘What is our responsibility as an employer, and what's the responsibility of individuals and families?'" says Digital Insurance's Sullivan. "It's an interesting recruitment issue."

According to Kaiser's benefits survey, healthcare coverage is on the decline among small businesses: 59 percent of companies with less than 200 employees offered health benefits in 2011, down from 68 percent in 2010.

Steve King, a partner at small-business consulting firm Emergent Research in Lafayette, Calif., says the rising costs and administration of health benefits is partly to blame for the nation's rapidly expanding contingent and freelance work force. (Nearly one in three American workers is an independent contractor, according to the Freelancers Union.) Companies that hire contingent workers are often driven to do so by spikes in workload and the desire to "test-drive" employees before making a permanent offer. "But it also lets you avoid all the encumberments of hiring a full-time employee," King says, including healthcare overhead.

Nick Balletta, CEO of TalkPoint, a New York webcasting technology company, provides his 100 employees with a comprehensive, fully subsidized PPO health plan. But because of the cost of that program, Balletta hasn't ruled out hiring contract workers in the future.

"Everything's on the table," Balletta says. "Maybe healthcare becomes the new bonus. You do well in 2013 or 2014, and you're going to get healthcare. Or maybe you give people raises and bonuses, and you don't provide healthcare. My bias is obviously to take care of my employees, but at some point, economics drive behavior. Somebody's going to blink first and cut healthcare. And then everybody's going to jump on the bandwagon."