By Jason Daley November 26, 2012
This story appears in the November 2012 issue of Entrepreneur. Subscribe » 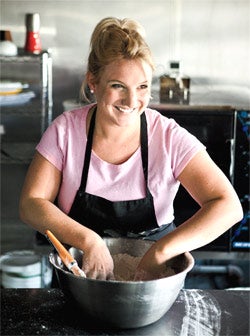 Allon and Sarah Azulai designed Kos Kaffe in Brooklyn's Park Slope neighborhood to be the type of place that invites lingering. The coffee is roasted in-house, menu items are freshly prepared, and the vintage interior invites patrons to get comfortable--at least until the afternoon. That's when the sun bakes the storefront's plate-glass windows and sends customers scurrying out the door to escape the heat.

The Azulais knew they needed to install a retractable awning. The problem? The $5,000 expense. Allon Azulai says banks weren't interested in loaning money to the 6-month-old business, adding, "We could have gone into debt with a credit card, but we didn't want to."

Instead, the Azulais signed up with Smallknot, a crowdfunding platform tailored to independent businesses. Unlike Kickstarter and other platforms, where almost anyone can ask for money to finish a tofu cookbook or form a bagpipe orchestra, Smallknot, which launched earlier this year out of the TechStars incubator, approves only established small businesses and startups beyond the idea stage that need a minor financial boost. For some companies, it's money for building improvements or equipment; others have run campaigns to fund websites, buy vehicles or add new products.

Jay Lee, co-founder of Smallknot -- which serves businesses in New York City and Greenville, S.C., and aims to expand nationwide -- stresses that, in addition to benefiting entrepreneurs, the site gives communities a voice in local development. "Smallknot is a way for people to realize there are avenues and tools to finance businesses in their own neighborhoods, beyond just frequenting them," he says. "It shows them that they can have an impact on the types of businesses that define their community."

Most businesses on the site are seeking between $2,000 and $10,000. Smallknot typically takes 10 percent of funds raised (with undisclosed criteria that can reduce the fee). Like with Kickstarter, if a campaign doesn't reach its goal, Smallknot gets nothing.

Lee wants businesspeople to know that Smallknot isn't charity or a lifeline to keep failing mom-and-pops afloat. Investors expect to receive rewards for their cash, usually of equal or greater value than their investment.

One Smallknot user, Molly Simons, ran a campaign to raise $2,500 so her Greenville bakery, Cake Notice, could expand its retail options. She says that over her successful 30-day campaign she cajoled family, friends and loyal customers to chip in, rewarding them with six-packs of cupcakes and a tiered cake that served 75.

Kos Kaffe, which offered donors a coffee-of-the-month club and a three-course dinner, got the money for its awning. Azulai says customers, friends of friends and even out-of-state tourists donated to the cause. "It's a great way to bypass the banking system and find out who really cares about you," he says. "It's a healthy practice that helps your business and improves the community at the same time."