When Louisiana State University students Kenny Nguyen and Gus Murillo heard that a key executive at a Fortune 500 company was speaking on campus, both rushed to attend. But instead of feeling inspired by the presentation, they were bored.

"It was 200 slides of nothing but text, and he read each one," Nguyen recalls. "I couldn't believe the president of one of the world's biggest companies was presenting like this. I thought, We could do so much better."

Nguyen and Murillo launched Big Fish Presentations in 2011. Instead of boring slides with facts, figures, bullet points and clip art, the Baton Rouge, La.-based company creates presentations that tell stories and resonate emotionally with viewers for effective promotion of products, services and causes. A basic package starts at $2,500.

In addition to crafting captivating content and packaging it with a sophisticated design, Nguyen and Murillo work with executives and sales and marketing teams to hone their presentation skills to ensure that the delivery of the material is as compelling as the content. "Audiences will always remember the presenter more than the presentation," Nguyen points out.

Many of the people whose companies they met with during their initial marketing push were skeptical: Some worried about hiring inexperienced college students; others balked at the price tag. However, the pair signed several businesses to the Big Fish roster using a common-sense approach: They reminded prospective clients that a successful presentation could be the ticket to landing a major deal that would more than offset the cost of their services.

EasyLiving Home Health Care in Clearwater, Fla., was hooked. Owner Alex Chamberlain knew that his orientation program for new hires was a snooze. But he had no idea how to make it more creative. "I wanted to partner with an organization that did out-of-the-box thinking," Chamberlain recalls. "The PowerPoint presentation their team created is so much more creative and engaging than the monotone lecture I was using." 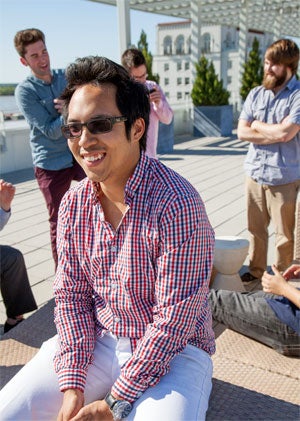 Nguyen and Murillo bootstrapped the business from the beginning, using personal computers to create presentations and upgrading software after clients paid their invoices. Soon they were approached about appearing on ABC's Shark Tank, and they saw dollar signs--in part because they needed equipment to improve their video production capabilities. "We wanted a $20,000 camera," Murillo says, "and started thinking about all of the other things we could do with that kind of funding."

The two ultimately backed out of the show, however, determined to build a successful business without outside investors. "It was a gut feeling that it wasn't right for us," Nguyen explains.

Meanwhile, they continued courting new clients. Their roster expanded to include healthcare, high-tech and food-service companies ranging from small businesses to corporations like Mutual of Omaha and Oracle. Revenue increased from $58,000 in 2011 to $225,000 in 2012.

Their business model has expanded, too. In addition to creating engaging presentations, Big Fish has a 10-member team offering consulting, design, scriptwriting and video-production services (thanks to the purchase of the aforementioned state-of-the-art video camera).

Murillo, a junior majoring in biological sciences, juggles his LSU studies with his role as Big Fish's COO. But Nguyen left school last fall to dedicate himself full time as the company's CEO. He says his decision reflects the fact that "we make our clients a promise that no one is going to be more passionate and driven about creating a great presentation than we are."