"Aha" moment: Anders wore ill-fitting suits from the menswear department for more than three decades before coming up with the idea to start a bespoke line for "lesbians, trans-masculine individuals and women of any identity who have a strong sense of self-expression." She took the leap into business this year, following the repeal of the U.S. military's "don't ask, don't tell" policy and the increasing acceptance of same-sex marriage. "As we start feeling a little stronger in our own values, we're willing to be a little more brave in our choices, including the clothes we wear," she says. 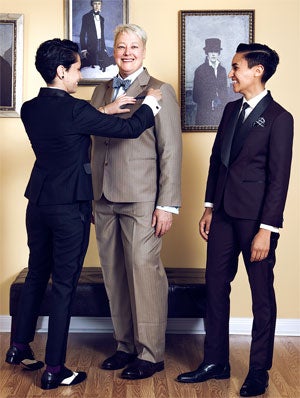 Stitching together a plan: Anders signed up for a business class through the Ren-aissance Entrepreneurship Center in San Francisco and invested $30,000 from an inheritance to launch her company. In April 2013 she raised more than $27,000 through a Kickstarter campaign. "I knew a lot of women had the same frustrations about shopping for suits in the menswear department, but I had no idea if the market was big enough to make this work," she recalls. Determined to test the concept, Anders secured patterns and fabrics from two companies, one in the U.S. and one in Hong Kong, and contracted with local tailors to take custom measurements.

The perfect fit: In her boutique, there is no such thing as off the rack; Anders works with customers to choose from a curated portfolio of patterns designed for women's bodies. After selecting patterns and materials--Tomboy Tailors stocks some 600 suiting fabrics and 1,000 shirting fabrics--clients are measured and their items are custom-tailored. "For most customers who come in, this is their first made-to-measure suit," Anders says, "and they are so enthusiastic about the experience."

Sew popular: Anders is finding the market for formalwear robust. Since opening in February, Tomboy Tailors has fitted women with tuxedos for weddings and outfitted girls who want to wear suits to their high school proms.

In addition to attracting shoppers from San Francisco, Tomboy Tailors has created suits for clients from Los Angeles, Seattle and New York and has received orders from as far away as Canada and Australia. Anders says most customers are women who prefer masculine clothing and want to shop in a judgment-free zone. And while they weren't the intended target audience, men also have lined up for fittings, thanks to the boutique's service and selection. "We sold three suits to men in the first month we were open," Anders notes.

Up next: Anders wants to go national. In the next year, she will hit at least 10 cities for "Traveling Tomboy" trips. The shop will remain focused on custom clothing, but Anders plans to introduce a ready-to-wear line of suits, shirts and neckwear. She also hopes to launch an online store but is still determining how to get accurate measurements. "A lot of tailors are uncomfortable working with women," she explains. "I'm looking at companies that do measurements via Skype and researching other possibilities to make online sales work."