Success in a Flash: How One Young Trep Turned DIY into ROI

By Jodi Helmer July 14, 2012
Opinions expressed by Entrepreneur contributors are their own.

Finding a cute flash drive for his girlfriend's birthday proved more difficult than Doug Stienstra imagined. At the time a student at The University of Iowa, Stienstra searched the mall and the internet, disappointed to find that the nontraditional flash drives on the market were unattractive and overpriced. So he took a DIY approach: He bought a fuzzy finger puppet from a toy store and glued it to a standard USB drive. The gift was a hit.

"All of her friends loved the flash drive and started asking me to make one for them," recalls Stienstra, now 23. "I knew I was onto something."

In 2010 he used the resources at the Bedell Entrepreneurship Learning Laboratory on campus to launch a business producing and selling the fuzzy finger-puppet drives he now calls Flash Pals (the original name was dataBabies). The drives come in a variety of safari animal designs, and a portion of proceeds from each sale is donated to wildlife charities, reflecting Stienstra's love of animals and desire to run a socially responsible business. "I think it's great that I'm able to use my business to have an impact on something I'm passionate about," he says. 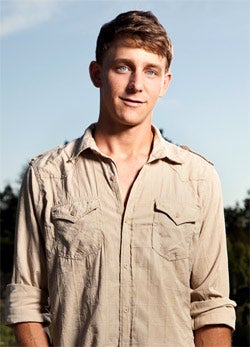 Stienstra invested $2,500 in his startup, using cash awards from business-plan and elevator-pitch competitions to cover the cost of trademarks, UPC codes and web design. Additional funding covered production for 640 units. Stienstra not only sold the drives for $20 through his website, but he also offered them on eBay and in gift shops and bookstores in Iowa City.

At first Stienstra did the manufacturing in his room, attaching finger puppets with glue. "It took hours and hours to assemble them by hand," he recalls. "[But] when I tested the market, there was clearly a demand, so I kept at it."

After graduating last spring, Stienstra moved to Austin, Texas. He worked with a small-business class at Austin Community College (ACC) and sought out investors to expand the business. When his initial inventory almost sold out late last year, the accidental entrepreneur knew he needed to change his business model if he wanted it to be sustainable.

With the help of $5,000 in capital from investor Scott Goyette, an entrepreneur and management professor at ACC, Stienstra began outsourcing the suppliers of Flash Pals to China (manufacturing is done in the U.S.), which allows him to produce more units for less. He still sells the drives (now priced at $29.95 each) online and through local retailers, but is also negotiating contracts with national retailers.

"From the minute I saw the business plan and started crunching the numbers, I knew Doug was onto something," Goyette says. "The creative, simple design had obvious marketing potential."

Now that Stienstra has seen the sales potential among his target market--tween and teen girls--he is envisioning new markets for Flash Pals. He's considering doing branded drives featuring college mascots or pitching the products to zoos and wildlife nonprofits as fundraising incentives.

Jodi Helmer is a freelance writer living in Charlotte, N.C. Visit her online at www.jodihelmer.com.