As marketers, we’re always looking for ways to build brand loyalty, nurture relationships, and keep the sales funnel engine humming. One of the best ways to accomplish all of this is to use Facebook posts. We’ve seen corporate and small business social media meltdowns, but what kinds of posts are likely to get shares, likes, and comments?

Shares, on the other hand, are far more valuable to a business, as they increase its reach exponentially. Shares also are harder to earn. The post has to communicate something about the person sharing it or forge a bond between that person and their friends and followers.

According to social media expert, Brian Carter, “[w]hen we click share, we’re obviously saying ‘I like this so much, I wish I had created it myself. I want everyone I’ve connected with on Facebook to see it. I’m ok with my family, coworkers, supervisors, bosses - and anybody else I’ve friended, knowing that I like it.”

Some types of posts get high levels of positive engagement and interaction. Carter and Marketo analyzed some of the most shared, most liked Facebook posts to determine what they all have in common. Here are some of the results:

Complaining about the weather in the middle of winter or summer is almost universal, so it affects a huge number of people. Combine a weather snapshot with a scene from an internationally famous movie, and you get a highly viral piece like this: 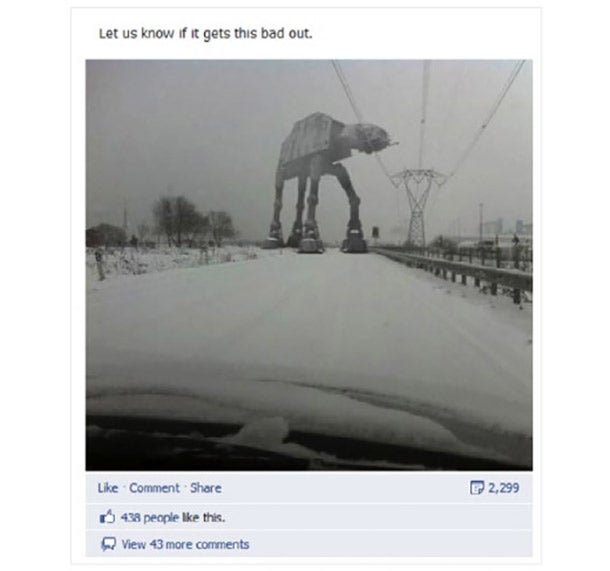 Although the page this image was originally posted on had fewer than 10,000 fans, it ultimately reached over 40,000 people through likes and shares alone.

Some Facebook users may groan at this one because it has become so prevalent in our newsfeeds, but there’s no denying that it gets results: 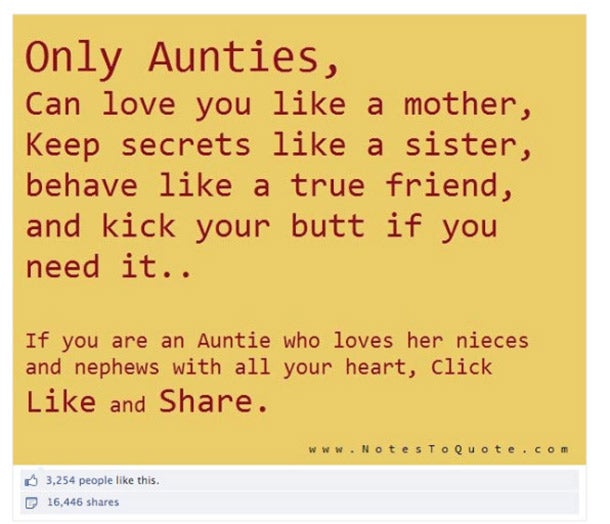 With over 15,000 shares, aunties are serious about the role they play in their families’ lives!

Think about not only how to best appeal to your audience, but also how they see themselves. Imagine asking these women, “Who are you?” Probably one of the first things they’ll tell you after their name is what kind of work they do, and about their kids (or, in this case, nieces and nephews). What are some ways that your target audience sees themselves?

Go On, Tell Us What You Really Think!

Many of us have deep down thoughts about superficial things that we wish we could share with the world. Whether it’s our love of coffee or the need for some retail therapy, sharing it with others ignites good “I-identify-with-that-too!” thoughts, like this: 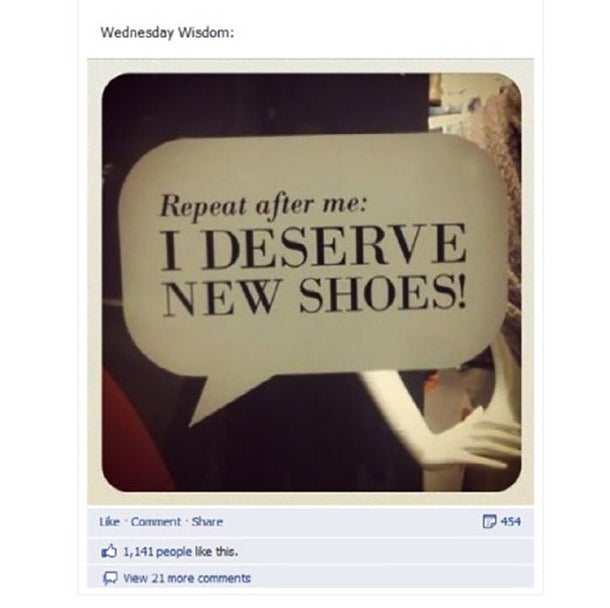 Although this particular theme would appeal most to women who have a closet full of shoes, you easily could tweak this kind of post to highlight tools, a vacation, or something from whatever industry you work in where you know people deserve better. (I’m looking at you, corporate customer service.) Sharing things like this is likely to get shoe fiends tagging their girlfriends, or husbands tagging their wives, so for a shoe store, it’s a definite boon to engagement levels.

As clich?d as some of them might sound, people share inspirational quotes on Facebook, not only because they like them, but also because they feel motivated and empowered, and they want others to know about it: 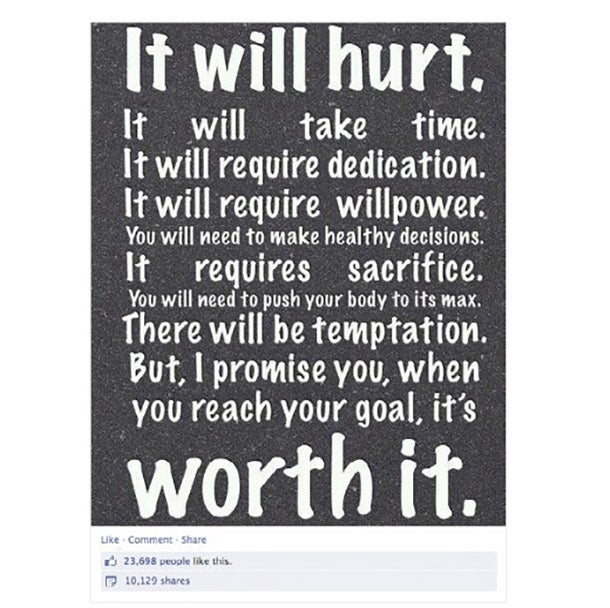 As you can see, this post had over 23,000 likes and over 10,000 shares, so a lot of people read it, identified with it, and passed it on. Those are some serious numbers that any business would envy.

“I’ve always wanted to _______.” Whether it’s to own a hotrod, backpack across Europe, or adopt an exotic pet, we each have our own little bucket list of wishes and dreams. Businesses can rekindle some of that awe and excitement by posting an image of something truly extraordinary.

If you sell gardening supplies, it could be an image of a world-famous botanical garden. If you’re a mechanic, a beautifully restored antique car could be enough to get your prospects drooling. If you’re a travel nut (like me), it’s something like this: 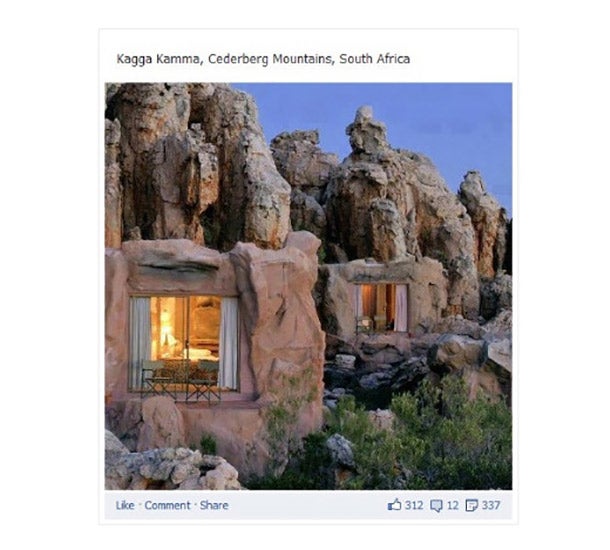 Think about the most incredible thing in your line of work. Then find a photo of it and share it with your audience. You can even superimpose text such as “Like and Share if You’d LOVE to Travel Here/Own This/Be Here Right Now!” It’s a fun way to get people talking and dreaming about their own bucket lists!

There are many more than just these five types of posts, including warning posts, decade flashbacks, fan success stories, and much more. Click here to read the full report and see more examples.

It’s one thing to look at the types of posts that get liked and shared, but it’s another thing entirely to make them yourself. The good news is there are many sites that make creating Facebook graphics easy. Here are a few of the best: 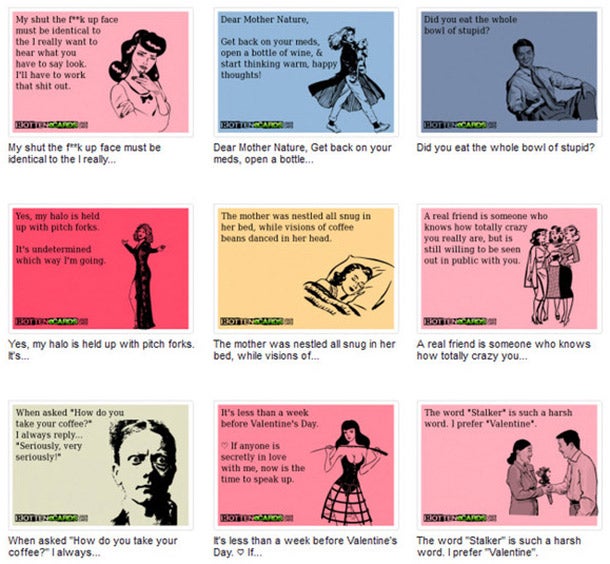 Rotten E-cards lets you create your own funny “inspirational” message using a variety of old-fashioned photos and colors. Some E-cards also lets you create images similar to these. 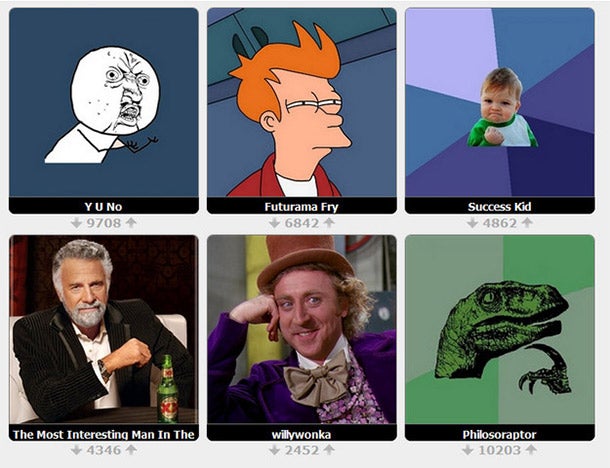 Characters now starring in viral memes across the internet

QuickMeme and ImgFlip both let you create meme-based photos using popular characters, including Morpheus from The Matrix, Grumpy Cat, the minions from Despicable Me, and many more.

LiveLuvCreate has a variety of backgrounds you can add text to in order to create your own quote photo.

Now you have no excuse not to get creative!

What are some Facebook posts that really resonate with you? What sorts of posts get on your nerves? Share your thoughts with us in the comments!