Mary Meeker: Tablet Shipments Are Growing Faster Than PCs Ever Did

By Laura Entis May 28, 2014
Opinions expressed by Entrepreneur contributors are their own.

Pity the poor desktop PC. Once upon a time, a very long time ago, it was considered the most cutting-edge thing around. It was popular; everyone wanted one, and so the desktop PC watched as its number of units shipped steadily grew.

But then the notebook PC arrived on the commerical scene in the mid-90s, really taking off in the early to mid-2000s. In terms of global units shipped, the notebook PC was growing at a faster clip than the desktop PC ever did, and in 2009, it surpassed it's clunky, sputtering rival.

Related: Report: Wearable Devices Could Revolutionize the Way We Do Business

The graph below puts it all in digestible terms. It comes from the latest annual Internet Trends report released today by Mary Meeker, legendary Wall Street analyst and partner at venture-capital firm Kleiner Perkins Caufield Byers. 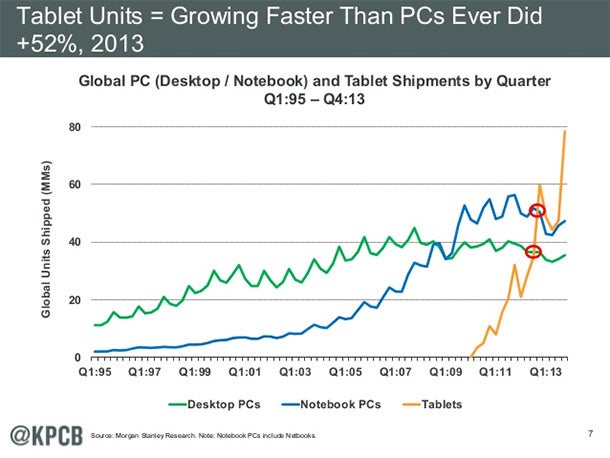 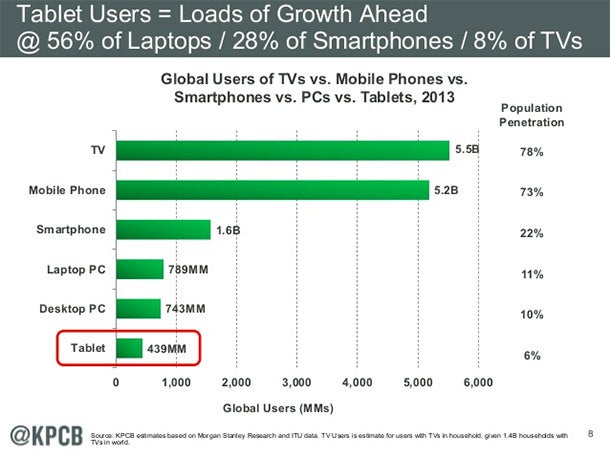 For more of Meeker's Internet Trends of 2014 -- encompassing everything from cybersecurity to education -- check out the full presentation below.