By Laura Entis December 4, 2014
Opinions expressed by Entrepreneur contributors are their own.

For years now, websites have determined our non-robotness by forcing us to decipher and enter a series of distorted characters. Called CAPTCHA, the process was built on the theory that humans are much better than computers at deciphering pixelated/fuzzy/confusingly-arranged numbers and letters.

While that was true when CAPTCHA was invented in the late 1990s, it no longer holds. Google estimates that computers can now solve CAPTCHAs with 99.8 percent accuracy.

In response, the search-giant has cooked up a new and improved method with which we can demonstrate our humanness online. Instead of being asked to enter a hard-to-read CAPTCHA, online security checks will (in most cases) simply require that we check a box reading "I am not a robot." The new system -- dubbed 'No CAPTCHA reCAPTCHA -- is rolling out today.

But how does the act of simply ticking off a box prove that we aren’t cyborgs? Apparently, it's not so much the actual tick that's important, but how the tick happens. Namely, the shaky movements of the mouse leading up to the action indicate that a human is behind it, the BBC reports.

"The sheer complication of the human arm and hand and the way they direct a mouse makes it difficult to predict," Tom Cheesewright, founder of the technology consultancy Book of the Future, told the outlet.

This technique won't work on smartphones and tablets, of course, where typing takes place without the aid of a mouse. Instead, online security checks on these devices will show Internet users a host of photos, and ask them to tap all of the ones that match a given clue (such as a turkey or a kitten). 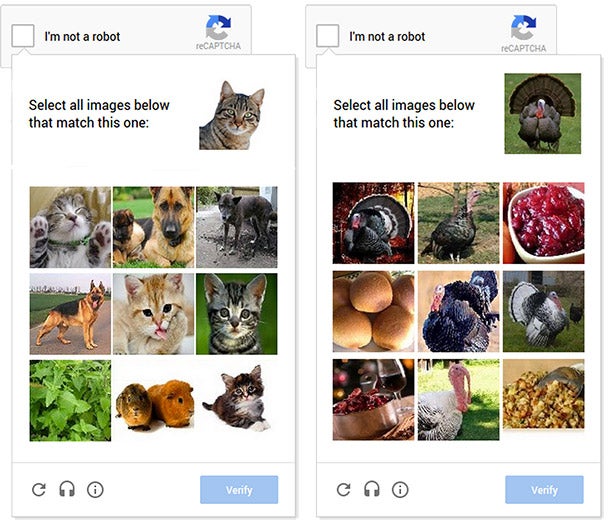 This doesn't mean that CAPTCHAs are disappearing altogether. In instances where a risk analysis engine isn't convinced that users are human even after the "I am not a robot" box is ticked, they will be prompted to enter a CAPTCHA to verify their non-robotness.

But this does mean CAPTCHAs will become far less frequent, vastly reducing the amount of pixel-induced confusion and frustration across the Internet.