How One Grocery Store Is Modernizing the Honor System

By Kelly K. Spors December 16, 2014
Opinions expressed by Entrepreneur contributors are their own.

In this series, we feature small companies helped by MBAs Across America, a nonprofit that sends teams of MBA students from top U.S. business schools across the country to help entrepreneurs tackle key challenges at different stages of their company's life.

The Challenge: Howard's is a small Kansas City grocery store, with a twist: The store, which opened in 2012, sells memberships for $60 per year; members get a door code allowing them to access the store 24/7 and pick from the locally grown produce and organic foods in stock. They then fill out a purchase slip and put their payment—generally cash or check—into a box. They can also use Square Cash, a smartphone-based payment system.

Founder and owner Craig Howard, who also runs a small Kansas City organics catering company, says he was inspired by the self-serve and honor-based model used by many traditional farm stands. But two years into his one-person business, he recognized that adopting more modern technologies could help him streamline his time-consuming bookkeeping process and grow his sales. He currently takes handwritten pieces of paper from the box, and his mom, an accountant, then logs them into a bookkeeping system. He also has to manually count inventory. Howard is soon relocating his store to a larger nearby location and will need to expand membership to help cover the build-out costs.

Howard asked MBAs Across America team to help him figure out how to incorporate technology into his business model without disrupting the intimate, old-school feel of his business.

Related: What These MBA Students Did on Their Summer Vacation

The Solution: A team of MBAs from Columbia University spent a week helping Howard conduct market research and create a financial model. They sent a survey to an email list of Kansas City residents that Howard had collected and conducted a focus group with six current loyal members to find out what they liked—and didn't—about Howard's current business model. The team discovered that many customers loved the honor-based system that Howard's uses, but felt having to use cash or check made dropping by on a whim inconvenient. "And they didn't like to do the math" involved with totaling their own grocery bills, sometimes inevitably leading to mistakes and underpayment, says Scott Miramontes, MBA team captain. 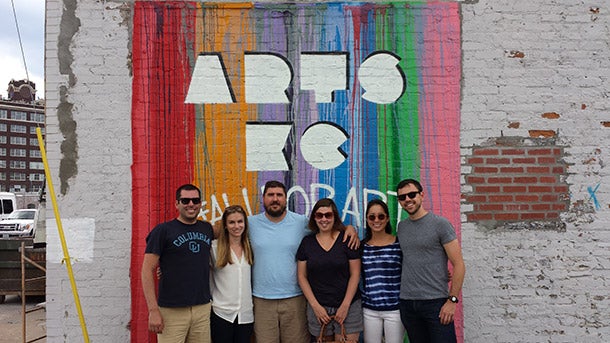 They also noted that Howard had to spend a lot of time keeping track of his inventory and accounting—something that a basic point-of-sale system could help with. The team researched what kind of technologies Howard's could incorporate that would be most cost effective for Howard's without sacrificing the "old school" feel to the store, Miramontes says.

The MBA team ultimately recommended that Howard get a Square Register, an iPad-based point-of-sale system that will allow his customers to enter their products, calculate the cost and pay by credit or debit card—still checking out without the need for a human cashier. The team also recommended that he link that system up to Xero, an accounting and online bookkeeping system that will allow the purchases made through Square to flow directly into the bookkeeping system. Together, these technologies will please the members who prefer to pay with card, hopefully attract new members. They will help Howard keep better tabs on his inventory because customers will log how many of each item they buy into the self-serve Square Register and those numbers will automatically be logged into Xero. "All of his costs will be captured as well, giving him more clarity into his business," Miramontes adds.

Related: To Grow, This Distillery Learned How to Tell Its State-of-the-Art Story

The Follow-Up: The original shop that MBAs Across America visited closed temporarily this fall to help the company prepare for a move to a new larger space. Howard says he plans to adopt the Square Register and Xero system when he opens his new store in early 2015, and the advice from the MBA team helped him realize the time and cost savings that could ultimately be realized by incorporating more technology. "Wherever I'm at, I'll be able to know exactly how much I have in stock," he says, because shoppers will enter the quantity of each item they purchase into the Square Register and will be subtracted from the inventory. He expects the new system will save him at least 10 hours a week of work thanks to replacing manual processes like inventorying with automated processes. He expects the technology will also increase the store's profitability because it will save time and because customers will likely spend more freely when they buy on their credit cards. "A lot of people will stop buying around $20, because that's all they have in their wallet," Howard adds.

Stuart Reid, executive director of the Food Co-op Initiative, a Minnesota-based nonprofit foundation that advises cooperative grocery stores, says he thinks Howard's Organics move to accept credit cards is a smart one—as most shoppers in today expect that from grocery stores, whether large or small. He also says an inventory and accounting system is often a key part of running an efficient grocery store today, because it helps reduce fraud and manual errors that naturally happen without such a system. Such errors can be costly to a small grocery store with already thin margins. Moreover, having automated systems can also help a grocery business grow because manual processes become more time-consuming and lead to more errors as a store gets more customers: "All of those things make the process more efficient," Reid says.

In the long-term, especially as the new store grows, Reid believes the self-service model might prove difficult. Many grocery co-ops, he says, initially tried a self-serve model but eventually realized they needed in-store staff in order to keep the operations running smoothly, help customers with any issues and prevent theft. Reid adds: "[Howard's Organics] is trying something that many of the food co-ops tried and moved on from." Howard says he's undeterred, however. "The self-service model works well for the members and it's the only way to have it be 24/7." He adds, "With our store it's not about speed or anything else but access so it will stay around for the members to shop."