This Entrepreneur Might Be the 'Best' in Shark Tank's History

When the investors first meet Brian Lim in the latest episode of "Shark Tank," he's wearing a giant cartoon headpiece and looks like a DJ ready to play to a bunch of ravers.

But once the mask comes off, the investors see that Lim has built two electronic music lifestyle companies with more than $7 million in annual revenue from the ground up.

Investor Robert Herjavec tells Lim that his focus, passion, and vision are exceptional. "Look, Brian, you're the real deal, man," Herjavec says. "You are probably one of the, if not the best entrepreneur we've had here."

The Sharks get into a feeding frenzy, and every investor makes an offer. Lim ends up making a $650,000 deal with Mark Cuban and Daymond John. Here's a breakdown of the pitch, including Lim's insights into the deal.

Lim, a native of Anaheim, California, enters the Tank seeking a $650,000 investment in exchange for a 5% equity stake in his businesses, "gloving" company EmazingLights and rave apparel maker iHeartRaves. The former is his flagship company, which he started in 2010 with just $100, and produces gloves with programmable LED lights built into the fingertips. He built iHeartRaves in 2013 to further tap the dance culture industry.

His girlfriend introduced him to the practice, which is essentially creating a light show with your hands, in 2010 at an electronic dance music (EDM) show and he was hooked. Lim says he had always wanted to be an entrepreneur but didn't know what kind of company he wanted to create until he fell in love with gloving.

He saw an opportunity to take charge of this niche industry and filed for patents on premium-grade glove lighting. He left his job as an analyst at Deloitte the next year.

Some EDM concert promoters have banned gloving in the past, but Lim takes the practice very seriously and even considers it a sport.

He created the International Gloving Championship through EmazingLights, and it's helped him make his company synonymous with gloving. EmazingLights has 80% market share, and he tells the Sharks that he guarantees that his four or five competitors "do not operate on the same level."

Lim's companies have grossed over $13 million and together made $7.4 million in revenue in 2014. He tells the investors that he wants to make EmazingLights a billion-dollar company.

The Sharks are intrigued. We've summarized the fight for a deal:

Ultimately, Lim makes a deal with Cuban and John. 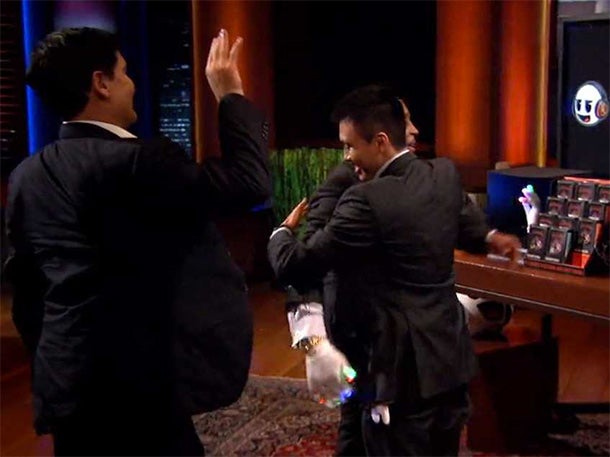 "Although I respect and admire all of the Sharks for what they have accomplished in business, I just felt that Daymond's brand-building experience and Mark's familiarity with technology and e-commerce were a such great fit for EmazingLights that the difference on the valuation for a 5% stake was irrelevant in the long term," Lim tells Business Insider.

"I gotta tell ya," Herjavec says in the Tank, "I hate losing that one." He tosses a glove onto the table in front of him.

In the days following the episode's premiere, Lim says that traffic to his e-commerce sites surged to "record levels," and they've received "a huge number of wholesale and licensed store inquiries."

Lim and his team are now looking to acquire regional, national, and international business partners to make the International Gloving Competition more popular.

"Holding over 80% of the worldwide gloving market means the burden of growing the competitive gloving market is on our shoulders, but we are excited to face the challenges ahead with two new Sharks on our team," Lim says.