Why More Baby Boomers Are Looking to Franchise

America’s big generation is heading into its next big phase of life. By 2030, baby boomers will be 65 or older and will constitute 20 percent of the U.S. population.

That’s a lot of retirees.

But many of them won't be retired in the traditional sense. They’ll be working, according to a 2014 Merrill Lynch Retirement Study that spotlights the “new retirement workscape.”

The report concludes that “in the near future, it will become increasingly unusual for retirees not to work.” Driving forces cited in the study include increasing life expectancy, elimination of pensions, economic uncertainty and the re-visioning of later life towards purpose and social engagement.

Related: Is the Notion of a 'Good Work Ethic' Generationally Biased?

Boomers are responding to the challenge by starting their own businesses in record numbers. According to the Kauffman Index of Entrepreneurial Activity, 23.4 percent of new entrepreneurs in 2013 were aged 55 to 64. Why the interest in entrepreneurship? When older workers are downsized, it can take nearly twice as long for them to find new jobs, so it makes sense to many boomers to start their own companies. Other boomers choose entrepreneurship as an encore career in order to pursue a passion, work on their own terms and continue to create wealth for themselves and their families. 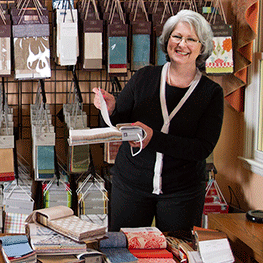 Bohnne Jones of Nashville, Tenn., fits both categories. After 31 years in health care, she was downsized five times between 2002 and 2007 -- until she turned to something completely different. “I was looking to own my own business and work pursuing my passion for design, fabrics and color.” Jones found her answer in the Decorating Den Interiors franchise that she has owned in Nashville for the last eight years.

She’s not alone. Many baby boomers have embraced franchising as the chance to start a business without having to build it from scratch. The U.S. Small Business Administration says, “Franchising can be a great alternative if you want to have some guidance in the startup phase of the business.”

Related: Why Boomers Might Be the Breakout Stars of Entrepreneurship (Infographic)

Jones agrees. “For me, it was an ideal situation. I chose to move into an industry that was not at all where my experience lay. I interviewed existing franchise owners, as well as people who had left Decorating Den. They all said the same thing: Follow the system, and you will do well.”

The advantages of buying a franchise include built-in name recognition, proven business models and operational procedures, and a wealth of support from the franchisor in locating, supplying and marketing the business. Jones used her own retirement assets, through an arrangement called Rollovers as Business Startups, to buy her franchise just before the onset of the recent recession, and the educational materials and low-cost marketing ideas provided by Decorating Den helped her weather the storm.

She also values the community that franchising creates. “You can get support from other owners who have experienced the same things you have, and you can get some great advice.”

Although all franchises require an initial investment, those worried about the lack of sufficient savings can still find franchises that don’t necessarily require large upfront payments or high net worth. Low-cost franchise options include commercial and residential cleaning services, printing and promotional products, tax preparation and a variety of services for children or seniors.

SBA loans may also offer a source of financing. And buying an existing franchise from a current owner -- as opposed to building a new franchise location from the ground up -- can give an entrepreneur more certainty when making a business investment. As with any undertaking, do your research and consult a trusted financial advisor to see if franchising makes sense for you.

Franchising can help baby boomers match their interests, their entrepreneurial spirit and their specific financial situation to a business they can build on -- with help and guidance from the franchisor, franchise associations and their fellow franchisees.

“I’ve had eight years of employment without the worry of yet another round of downsizing," Jones says. "My business is strong, and I feel that I could, in a few years, step back and allow the business to take care of me. Then I can downsize myself!”

Related: Baby Boomers, Who Are More Successful as Entrepreneurs, Are Great Startup Assets