How a Robbery Led to a Business Idea

Entrepreneurs: Jonathan Kinas, Avin Samtani and Rob Peck had their valuables stolen from lounge chairs at a South Beach, Miami, resort in 2011. The friends came up with an idea that would turn their misfortune into opportunity.

“Aha” moment: “We tucked our things into our sneakers and went for a swim, and when we came back, everything was gone,” Kinas recalls. “When we realized several other people at our resort had the same problem, we said, ‘We need to invent something to prevent this.’”

After researching the market for personal outdoor security products, the three graduates of Hofstra University’s Zarb School of Business—who were all working in finance at the time—invested their own money to develop AquaVault, a portable safe for use at the pool or beach.

Security guard: Made from high-impact ABS plastic and large enough to hold a wallet, cell phone and keys, the safe secures onto a lounge chair and has a three-digit, resettable combination lock. Customers are also using it on strollers, bicycles, golf carts and boats. “As time goes on, we’re hearing how the uses increase, so we’re working on other designs to expand our offerings to better accommodate those needs,” Kinas says. 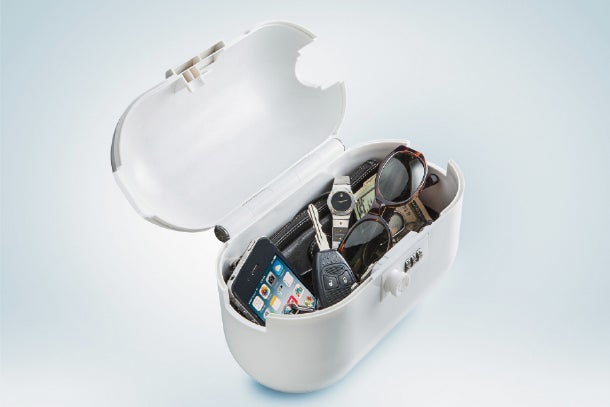 Locking it up: AquaVault hit the market in early 2014. Today the safes are sold on the Aventura, Fla.-based company’s website (theaquavault.com), and on Amazon and Walmart.com. They retail for about $40. The safes are also available to rent at high-end resorts such as The Ritz-Carlton South Beach and Hilton San Diego Resort and Spa, as well as at pools, beaches and water parks across the country.

“We officially started selling product in the second quarter of last year, and since September we’ve doubled sales into the six-figure range,” says Kinas, now managing partner of AquaVault.

Full exposure: Much of the product’s early traction can be attributed to press coverage at high-profile media outlets ranging from the Today show to Vogue and The Daily Mail. That coverage came thanks to a “massive” number of emails the founders sent to producers and editors to promote their product.

“We expected a certain amount of resistance from a portion of the people we targeted, but we’ve had nothing but positive feedback,” Kinas says.

Jonathan Long, founder and CEO of Miami Beach-based Market Domination Media, says that while securing media coverage depends largely on the uniqueness and quality of the product, startups can help improve their odds by building relationships within the outlets they target.

“Take time to learn about the writers and journalists who cover stories that are similar to your product or service,” Long says. He notes that Twitter can be an especially effective channel for this type of marketing.

A day at the beach:  AquaVault’s media efforts paid off in March 2015, when the team appeared on ABC’s Shark Tank and locked up a
deal with judge Daymond John, who invested $75,000 in exchange for a 25 percent stake in the company. While John’s investment is a boon, Kinas and his partners are more thrilled about gaining a mentor who can provide sound business advice and the connections they need to grow their company.

“The capital is fantastic, but our main objective was to work with a proven team of successful entrepreneurs so we can make more calculated decisions going forward,” Kinas says. “This is our first product, but it’s certainly not going to be our last.”