Get Your Burning Crowdfunding Questions Answered on Kickstarter's Version of Reddit

Crowdfunding campaigns don’t run themselves. There’s a lot of strategy, planning, hustle and hard work that goes into running a successful campaign.

But how do you do that?

Answering that question is why Brooklyn-based crowdfunding platform Kickstarter just opened up its online question-and-answer forum to the public. Called Campus, the platform operates like Reddit. Users can upvote and downvote answers depending on how useful a response is.

Anyone can surf the content, but to ask a question, you have to be actively working on a project on Kickstarter. The campaign doesn't have to be live, but it must be in process.

Topics range from more technical inquiries such as, “What tips do you have for making a great project video on a limited budget?” to more personal, emotional questions such as, How do you deal with, “The feeling of 'omigodwhatif…'" 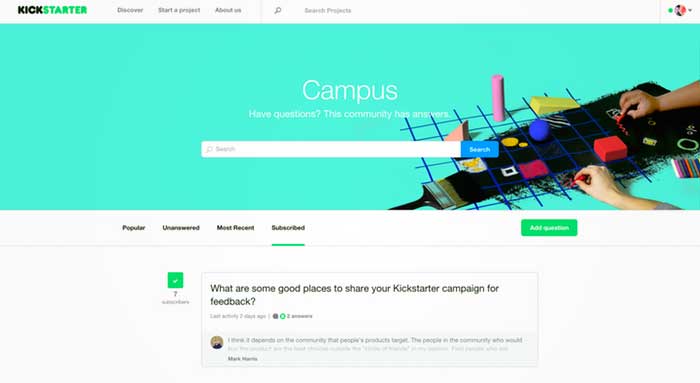 There is some really good tips in the responses. For example, keep your online videos under three minutes, don’t record a video with a window behind you and be yourself.

“The crazy different stuff about you is what people are attracted to, it's your story remember, own it,” writes Kickstarter community member Jeremy Bailey. “Have fun, there's a reason Jimmy Fallon was the least talented comedian on SNL but ended up with the most successful career. Sure he laughed during every sketch he was ever in but his fallibility was human and likeable!”

And as for that feeling of fear? “I'm not sure that feeling ever goes away. I had it on both my campaigns,” writes James Cooper, another Kickstarter community member. “I try to look at it like this: If I'm not going crazy hoping it goes well, I don't care about it that much, and I probably shouldn't be doing it anyway.”

If you are already working on a crowdfunding campaign, or just thinking about it, connecting with other creators who have been there before is likely to save you a lot of lonely anxiety. Ask, read, chat and crowdfund away.