The Heavy Metal Tribute to Elon Musk You've Been Waiting For

According to the members of Raptor Command, during the past 25 years, there are six areas altering the course of humankind: the Internet, humanity becoming a multi-planet species, sustainable energy, artificial intelligence, genetics and heavy metal music.

Hard to argue with any of those points, especially the last one. Raptor Command says that their mission is to "raise awareness of and promote Elon Musk’s futurist ideas and visions for the future of humanity through the medium of heavy metal music and subculture."

Says lead singer Ty Christian, “Much like the Tesla batteries, this music continuously builds energy as if it were magically pulled from the ether. Faster than a Model S, and more explosive than a SpaceX rocket -- this metal is truly something that will launch us into the future!"

The band's sound feels like Megadeth and Queensryche had a thrashing, double-bass drumming baby. Ty's voice reminds us of Iron Maiden's Bruce Dickinson, and his lyrics? Emily Dickinson. Peep these rhymes:

Breaking the rules, he follows his path / Visions of the future now within his grasp
Harnessing the power, the power of the sun! / Energy and freedom for everyone! 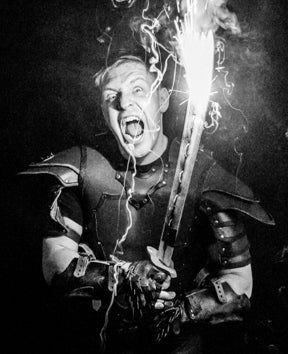 Download "Elon: Champion of Humanity" here and rock into the future!