This story appears in the December 2016 issue of Entrepreneur. Subscribe »

Bric Simpson was a genuine movie buff: He hit the theater about five times a month. That also made him attuned to the finer points of snacking, and he had some problems. “You pay a premium price for popcorn, but they only butter the top layer. An inch down, you’ve got almost a whole bucket of popcorn that tastes like cardboard,” he says. In 2009, Simpson and his wife were shaking a popcorn bucket to distribute the butter when she said, “You know what we need? A lid.”

Related: Seizing Opportunity Led to the Creation of This Outlet Franchise

Today, Simpson has made that lid -- along with a company, Kernel King, that sells about 100,000 of them a month nationwide. But the process wasn’t easy. He had to juggle his business while working full-time for the Army National Guard, and he needed to figure out how to break into the largely change-averse theater industry. But now that he has, Simpson’s next goal is a big one: He wants his lid to be as ubiquitous as movie popcorn itself. 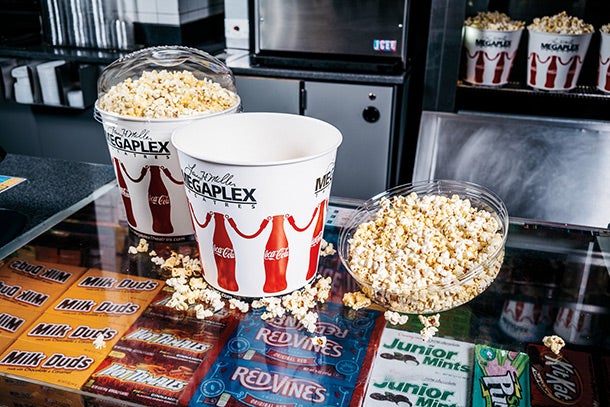 Simpson had always loved the idea of running his own business. His wife’s lid suggestion seemed like the perfect opportunity -- but rather than spending time on a design or a manufacturing plan, one of his first moves was contacting a patent lawyer. “We were worried that somebody would see the idea and say, ‘Hey, this is something we should do,’” says Simpson. The patent lawyer couldn’t find any competing patents, and he told Simpson that with a unique enough lid, he shouldn’t have any trouble patenting it.

In late 2011, Simpson began sketching lids and creating prototypes with a local machine shop. He added vents so hot popcorn doesn’t get soggy. He tested variously sized domes for optimal butter distribution. (“We decided on our current height based on best shakability,” he says.) Width had to be perfect, to snap onto the most popular manufacturers’ buckets. And he added a handle -- making it easy for employees to lift the lids out of display cases, and enabling customers to hold the lid upside down like a bowl and pass it to their friends.

Related: The Important Pivot That Built This One-of-a-Kind Online Marketplace

Once he had a design and a patent pending, it was sales time. He booked a meeting at Water Gardens, a local Utah theater chain he frequented. He’d never sold a product before but relied on his military experience: He recruits for the National Guard and knows how to be convincing. “I’m a fix-it-myself kind of guy,” he says. The theater manager saw an unexpected benefit: The lid could prevent popcorn spills and help keep the theater cleaner. So in the summer of 2012, Water Gardens ordered 50,000 lids.

Simpson also found early success at Bow Tie Cinemas, a chain with 50 locations, mostly on the East Coast. “Everybody is always trying to pitch the next best thing in concessions, and it very rarely happens,” says Dan Herrle, Bow Tie’s director of concessions. But Simpson was in luck. Herrle had been watching theatergoers go to ridiculous lengths to distribute butter, including shoving straws into the popcorn and drizzling the liquid through them. Often, customers would then take cardboard drink trays -- which cost the theater 50 cents apiece -- so they could share popcorn on them. The Kernel King solved all these problems -- and, although Simpson won’t reveal his price, he says the lids are far cheaper than drink trays.

Bow Tie Cinemas debuted the lids in 2014. Like many theaters, it sold them separately for $1. But it also added them to its standard popcorn-and-soda-combo deal. Once the theater threw in a lid for free, combo sales jumped 50 percent -- a huge boost in an industry that makes most of its money on concessions. (To help sales along, Simpson also hired a production company to make a commercial for Kernel King lids; many theaters now play it for free before movies.) “There was one point in time that our distributor ran out during the Christmas season, and people were just furious,” says Herrle. “Now it’s like an item you have to have.”

Despite this success, getting into larger chains proved a longer and more complicated process. Simpson began hitting industry trade shows in 2012. Interest came slowly. “It’s a long sales cycle, and that was something we weren’t really used to,” says Simpson. Still, he says, the shows were worth it: They allowed him to meet face-to-face with theater managers, rather than just cold-calling them. Finally, those relationships paid off. This year, Simpson’s lids have entered theaters across the country. He recently started selling lids to National Amusements, the 10th-largest chain in the business and Regal Entertainment Group, the largest chain, sold his lids at a trial run over the summer at its Regal Cinemas in California.

Related: The Key to Creating a Successful Startup Around Your Passion

Kernel King is now in 160 locations, and Simpson expects to be in more than 300 in the next year. “We don’t want to stop until every single popcorn bucket has a Kernel King lid on it,” says Simpson. “Just like customers expect a lid and a straw with their fountain drink, they will also come to expect a Kernel King lid with their popcorn.”