This ain't your grandparent's business trip.

By Juan Martinez January 26, 2017
This story originally appeared on PCMag

When you imagine business travel, you might think of steakhouses, yellow cabs and luxury hotel suites. This is Don Draper in a three-piece suit, carrying a leather briefcase and toking on a Lucky Strike as he pitches a new client alongside the pool at the Fontainebleau. Unfortunately, new data from expense management company Certify suggests that a bleaker, more frenetic business travel experience has overtaken the United States, one driven by digital technology, convenience, speed and price.

The data, which analyzes the receipt information from more than 10 million transactions, shows that Uber and Airbnb have begun to replace the yellow cab and the hotel chain as the go-to transportation and lodging options for executives. Uber was the most expensed vendor of the year, accounting for 6 percent of all transactions in 2016 -- the first time they've received this honor since Certify began compiling receipt data in Q1 2014.

Uber transactions have grown 254 percent year over year. The ride-sharing app maker now represents 52 percent of all ground transportation transactions recorded by Certify. Meanwhile, general yellow taxi transactions have decreased to only 11 percent of all recorded rides, down more than 37 percent since the start of 2014. In terms of what riders are spending, the average cost per ride was $24.75 in an Uber, $34.62 in a taxi and $24.99 in a Lyft.

"Ride sharing just continues to compound growth quarter after quarter," said Bob Neveu, CEO of Certify. "Taxis continue to lose share. It would seem to me that the Uber and Lyft applications have become embedded in the business travel experience. Think about it: Who prints out their boarding pass anymore? It's always on your phone. Taxis have to find a way to get in on the phone interface."

Previously, Starbucks held the honor of most-expensed business. However, Starbucks (tied with American Airlines and Delta) represented only 4 percent of all transactions in the most recent report.

On the lodging front, Airbnb has doubled in transaction growth year over year since 2014. Although Airbnb only represents about 0.27 percent of all lodging transactions, the market is quite saturated. For example, Hampton Inn, the category's leader, only represents 8.8 percent of all lodging transactions. Based on the data, Airbnb appears to be winning the category in longer trips. The average hotel receipt logged 2.58 nights whereas the average Airbnb receipt logged 4.51 nights.

"Companies are allowing people to stay at Airbnb, especially for longer stays and larger groups," said Neveu. "If you're going to a trade show and you're going to stay for four nights and you'll have a bunch of meetings at your suite, we're seeing a lot of Airbnb. We don't see a lot of Airbnb for a single-night stay. We're still seeing hotel bookings there. But, once you're beyond one- or two-day stays, we're seeing more Airbnb." 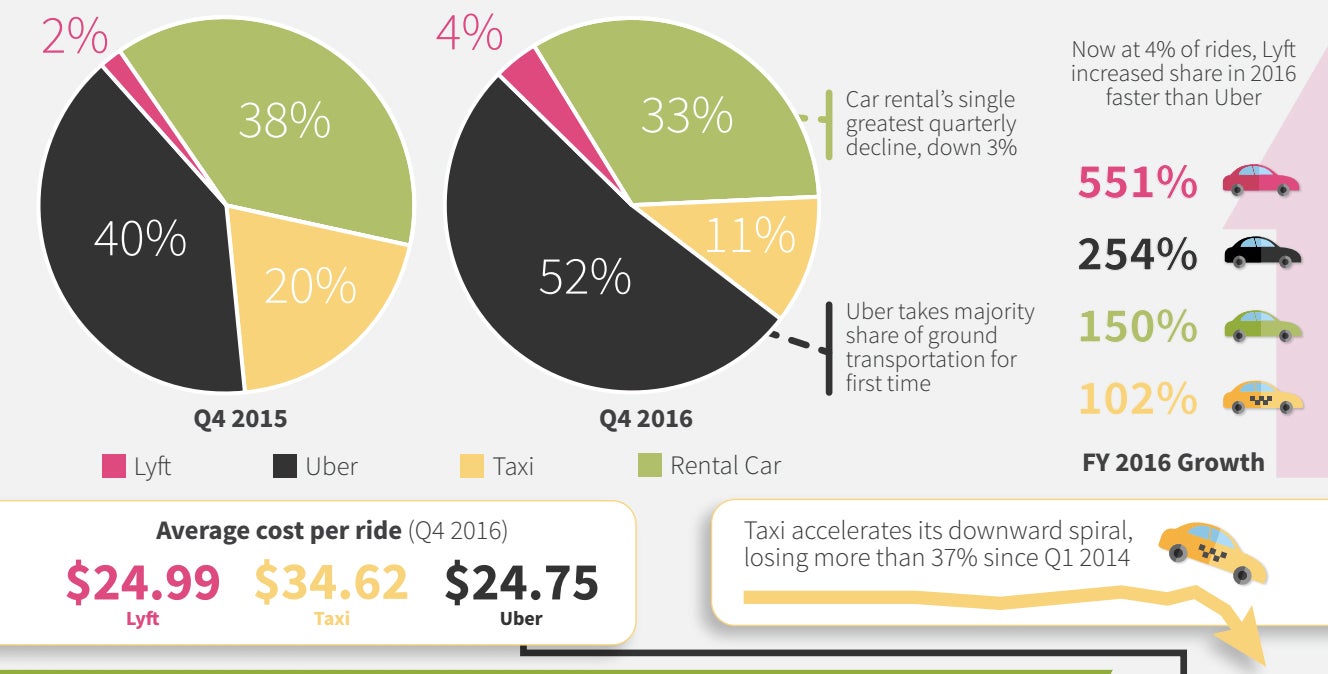 If you thought most business travel meals were eaten at fine-dining establishments, you'd be devastatingly wrong. Starbucks was the most-expensed meal, with 5.1 percent of all meal-based transactions during the fourth quarter of 2016 (annual data was not available). You're probably thinking: Yes but that's just for coffee. Sure, some of the total receipt value includes coffee but the average Starbucks receipt tallied by Certify was for $12.62. This indicates that coffee and food are being purchased by these travelers. A cup of Starbucks coffee is expensive but it ain't $12.62-expensive.

Don Draper would be disheartened ... and probably overweight. 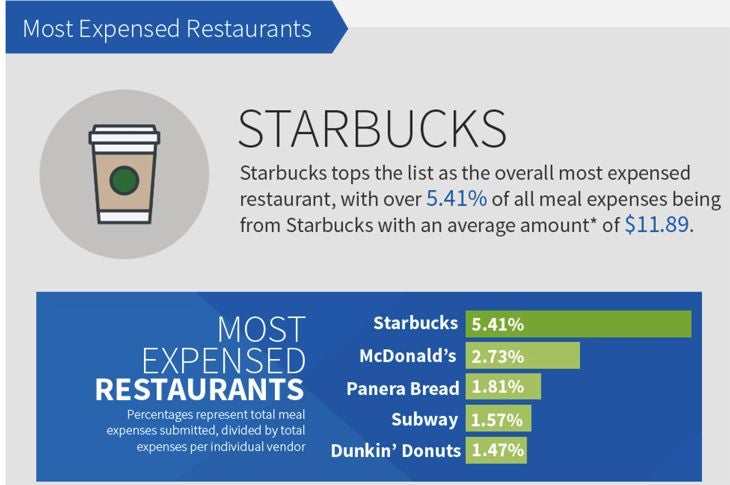