Keeping SoulCycle at a Sprint and Ahead of the Pack

This story appears in the July 2017 issue of Entrepreneur. Subscribe »

Melanie Whelan is not new to customer service. Before joining SoulCycle as COO in 2012 and moving into the role of CEO in 2015, she cut her teeth at Starwood Hotels and Resorts, Virgin America (which she helped launch) and Equinox Fitness. Now, in the increasingly crowded world of boutique workouts, Whelan is tasked with keeping SoulCycle ahead of the competition -- in the very industry it helped spawn. Her plan: Grow steadily from its 77 current studio locations, with an eye toward international domination; treat customers like family; galvanize her ever-expanding team; and of course, never forget where the company finds its soul.

Related: Exercise. It's the One Thing Everyone Can Do to Get Ahead in All Things.

You joined SoulCycle as COO back in 2012 before moving into the CEO role in 2015. You had been working at Equinox -- what was so appealing about this brand to pull you away from your gig there?

I actually met [SoulCycle founders] Elizabeth Cutler and Julie Rice back in 2008 at the first location on Manhattan’s Upper West Side. I was doing business development for Equinox, and my job was to look out for new business opportunities. I kept hearing about SoulCycle. I have a rule that if you hear about something three times, you have to try it.

That’s a good rule. What was your takeaway?

It was a really special experience, and the next day at my desk, there was a silver SoulCycle bag with a handwritten note saying, “Thank you, it’s wonderful to know you” and a baby onesie, because I was six months pregnant at the time. It was so personal. Usually in this industry, if you try a new service, people send a follow-up asking you to come back in, offering a buy-one-get-one or some kind of promotion. This simple hospitality touch stuck with me. And then, of course, in 2011 Equinox acquired a majority stake in SoulCycle, and in 2012 I joined the team, at long last.

SoulCycle pretty much invented boutique fitness. As the market gets more competitive, how do you stay ahead?

Good ideas come from all over the company. It’s the team closest to the riders that often has the best ideas. For example, we heard that a lot of our regular riders -- who are with us two, three, four times a week -- want to be recognized for that. So we created a program that notifies us when riders hit a certain milestone. Five rides, 10 rides, 100 rides. We empower our team to surprise and delight them with some kind of reward based on what they know about that rider -- a coffee in their locker, a new piece of retail, a green juice with a candle on top or riding on the podium for the last song of class. 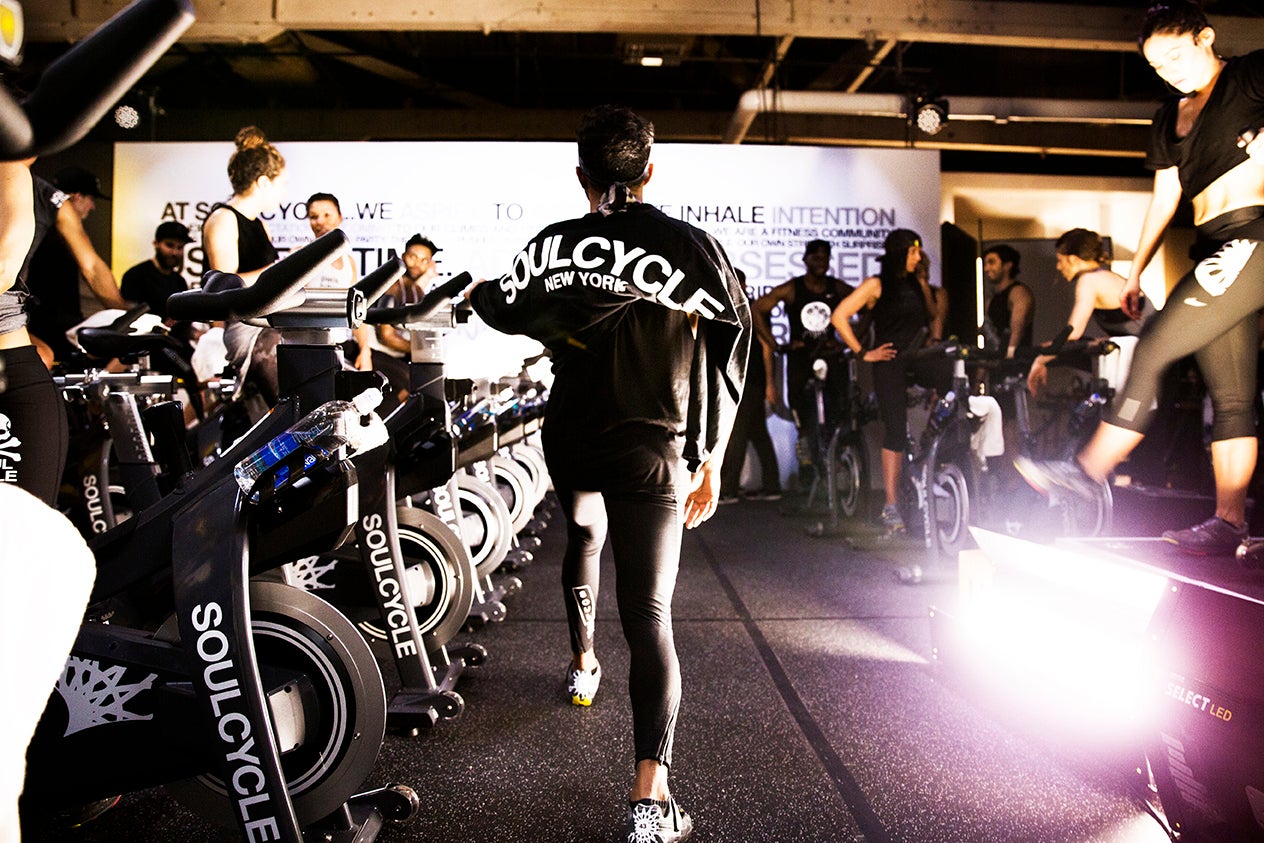 You’ve credited a lot of your career success to the fact that your first job, with Starwood Hotels and Resorts, was a larger role than you were prepared for. How has that influenced the way you manage your team?

I’m a big believer in the power of potential. I was very fortunate to be given opportunities that I wasn’t ready for right out of college. I worked hard and put my head down and learned early on that if I didn’t have an answer, I’d ask a lot of questions and figure it out. Now I love promoting from within, and the best way to get someone ready for their next role is to give them a project that’s tacked onto their day job. And if someone puts their hand up for something, give it to them! They’ll hold themselves accountable.

What advice do you give to your female staff as they carve out their place in the business world?

This idea of bias, and subconscious bias, is getting a lot of discussion right now, which is really good. Being a woman in business is challenging, but it’s challenging for a lot of different groups. I went to an all-girls school for 12 years when I was growing up. I didn’t know anything other than being around women. And so it felt very natural for me to just continue on through an engineering education, which of course ended up being predominantly men, and then I entered the business world, which is also predominantly men. The advice I give to all my teams is to lead with research and fact. Dot your i’s and cross your t’s. It’s hard to refute facts.

Any other good advice from your previous jobs?

One of my most formative experiences was working for Richard Branson, developing Virgin America. He has a fundamental belief that you must galvanize your team internally, motivating and listening to them. Because your team is who will talk to your customer, and your customer is who will take care of your shareholder. That inverted pyramid of management that really starts with employees has shaped how I think about every role I had and have.

This spring, SoulCycle debuted its first-ever brand campaign, “Find it,” about the strength riders discover in your classes. What does it signal about where the company is heading?

We wanted to acknowledge the community we’ve built over 11 years. What we do is about so much more than a bike. It’s about the breakthrough we enable our riders to have -- some find peace, some find clarity and of course some do find fitness. Working on this campaign let us regroup and really think about our core values as we reposition the brand a bit.

Do you have any examples of customers finding that sort of peace or clarity?

I had a rider a couple of weeks ago whose son, very unfortunately, had passed away. She started coming to SoulCycle, and what she found was a space where she could cry. She’d led her son through a battle with cancer, and she’d had to be strong all the time. At our studio, she found the permission to let it all out. 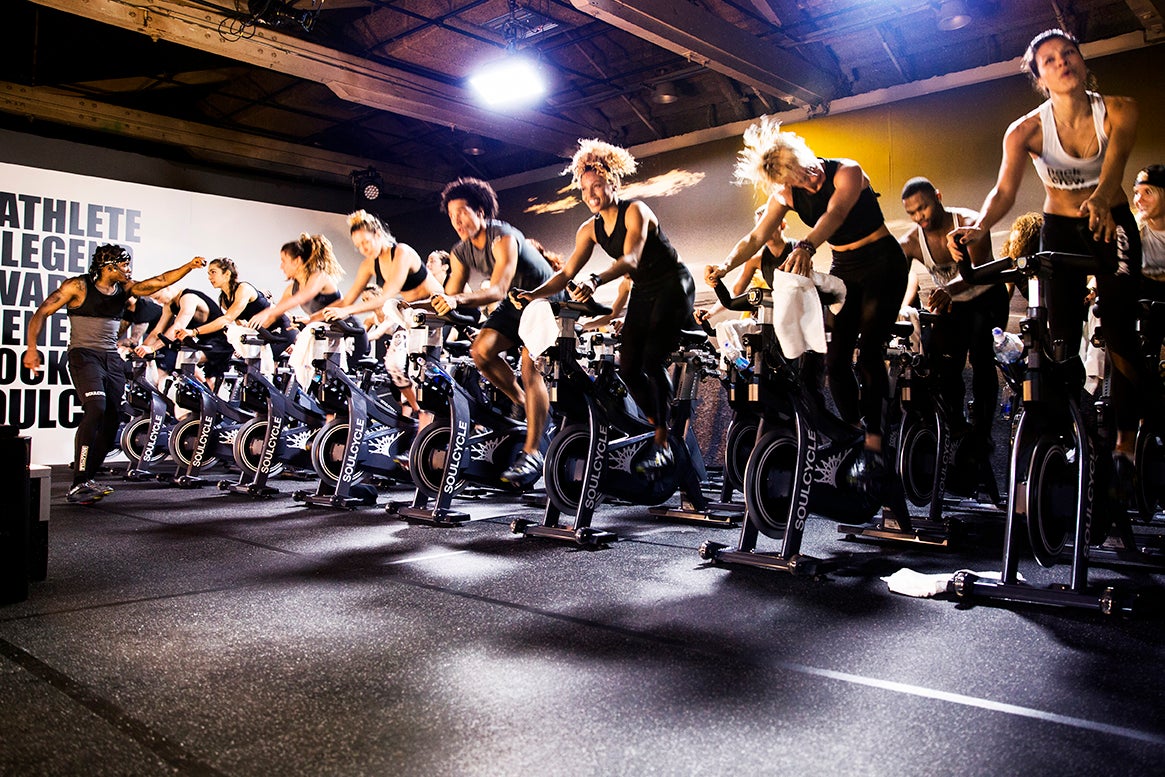 As you grow, how do youmaintain that sort of intimacy with your customers?

We want every rider to have a safe, comfortable, personal experience. But to do that, we have to say no more than yes, especially as we expand to new markets. We’re currently opening 15 new studios a year, but we still get a lot of “Why not?” Why not Denver? Why not Atlanta? Why not London? The easiest thing would be to open 25 new studios every year. But slower expansion lets us understand how we can do what we do better.

Our tagline has always been “Find your soul.” We started in New York, and the New York community understood what that meant. But now we’re in 15 markets, and we opened our first international location in Toronto earlier this year. We’re seeing a really wide demographic of people coming in that, frankly, we never expected, and we’re hearing about how they relate to the brand. “Soul” means something different to each and every person. As we scale, we have to listen to and respect the nuances of the communities we’re entering.

What nuances did you find in Toronto?

I don’t mean to generalize, but Canadians are really friendly! We had to up our game and keep our style authentic, but in a way that still feels special in a market full of friendly people. It meant being extra patient as first-time riders filled out paperwork, and being extra accommodating as we connected with those riders early on. We’re a hospitality company; we pride ourselves on personal connections.

As you continue driving this expansion, what’s your wildest dream for SoulCycle’s future?

Oh, that’s a good one. It’s hard when every day is a surprise. I never imagined Michelle Obama would be riding with us three or four days a week. Getting her husband in is a dream of mine.

He hasn’t been in?

No. He was very sweet when I asked. He said, “I bring a bit of attention with me when I go places. I’m not sure it makes the most sense for your business.” But in all seriousness, being able to scale this business internationally and have SoulCycle classes happening in French and in German and in Mandarin -- it would be unbelievable. If we can create people who aren’t just physically fit but mentally fit, we can create real change. Going from 77 locations to 90 locations is impactful. But if we can scale this to 500 or 1,000 locations across the globe? That’s real impact.

3 Tips for Thriving Among Industry Giants

Don't Study the Competition. Study Winners in Other Industries.

Never Again Get Blindsided by a Comparison to Your Competitors