Don't Think Outside Your Box!

To be happy at work, a greater understanding of one's own nature cannot help but get you into the right workplace.

By Richard Koch November 16, 2017
Opinions expressed by Entrepreneur contributors are their own.

You should certainly be clear about what you enjoy doing, and whether you can incorporate that into your career. But what you do is only one element in the equation. Consider also the work context within which you work and the importance or relative unimportance to you of high professional achievement. These may be more important than the what that leads you at work.

Where do you stand on two dimensions?

Think inside the box.

The chart below shows the six choices. Which box is ideal for you? 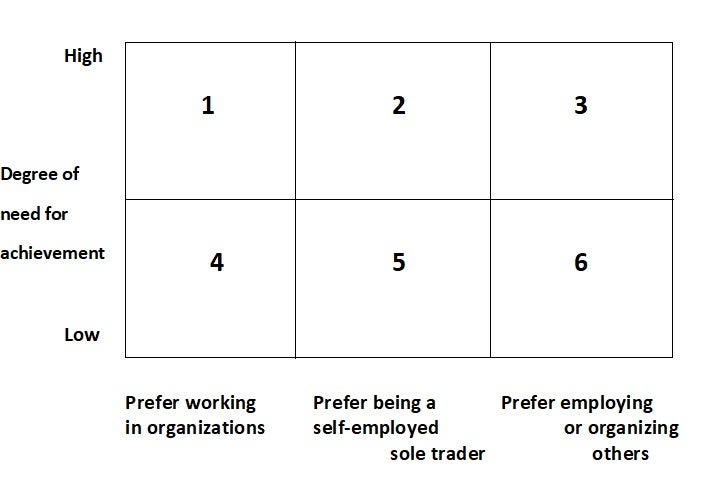 These folks are highly ambitious but prefer to work in a context organized and provided by others. This is the province of ‘organization man’ or woman. The number of these roles is falling, as large organizations employ fewer people, and also as these big outfits lose market share to smaller ones. But there are still plenty of these posts, and if their supply is falling, so too is the demand for them.

If you like this type of role, recognize the fact and pursue your ambition, however unfashionable it may be. Large organizations still provide structure, status, and often congenial colleagues, even if they can no longer provide security or the highest level of rewards.

2. People who go it alone, but drive hard.

These folks are typically professionals who have a drive for recognition by their peers, or who want to be the best in their field or narrow area of specialization. They want to be independent and do not fit well into organizations, unless like universities, for example, they are very permissive. Increasingly, box 2 people gravitate to the more creative types of freelancing, where there is freedom to work when you want, and on issues that interest you, as well as variety and independence. All while also having the ability to work as part of a temporary team.

If you are ideally a box 2 individual, become self-employed as soon as you have learned your skill and exhausted whatever else the best organizations in your field can teach you. Once self-employed, resist the temptation to expand and employ other people -- you may make more money but you will have too many headaches for work to remain fun. Instead, focus on the most interesting work and that which pays the most for each day of your time. As a box 2 person, your ideal work is as a sole trader, so avoid professional dependence on other people as far as you possibly can.

3. Folks who build their own deal.

These individuals have high drive and a desire to shape the world, hate having a boss, and do not want the lonely life of a sole trader. They may be unconventional and maverick, but they are builders. They want to build a web or structure around them, often really as a dramatic expansion and extension of their own abilities and ambitions. They are tomorrow’s entrepreneurs, and they often fashion lasting and unique firms.

Bill Gates and Steve Jobs were both college drop-outs who were obsessed with the new world of personal computers. Both were hugely ambitious and quirky; neither was a sole trader. Both were the dominant co-founders of their ventures; both needed to have a number of highly talented people working for them.

Related: Debut of Musical About Steve Jobs and Bill Gates Postponed After Investor Drops Out

Many of the most brilliant people are like this. If you want to work with other people, but not for them; and if you are also driven to build a new venture around yourself, then you live in box 3. Realize it now and do something about it. I have known quite a few frustrated professionals who were really box 3 types but who operated in box 1 or 2. They failed to see that the source of their frustration was not professional, but rather organizational.

Risk aversion often also came into it. If you want people working for you but don’t like taking risks, my advice is to start an organization anyway. The worst you can do is lose all your money. The alternative may to be lose your soul.

If you don’t honestly have a big desire for career achievement, but do enjoy working with colleagues, you are probably in box 4. Spend your time happily doing this, either in a normal job or in a voluntary role.

They are not ambitious but do want to be autonomous. Rather than set up their own firm, their best role is as freelancers, perhaps working the number of days and times that best suit their lifestyle, rather than trying to make as much money as possible.

This last box is home to another breed of people altogether -- their need for achievement isn’t particularly high, yet they enjoy the process of organizing, stimulating, inspiring, and developing other people. They are assertive, but caring rather than personally ambitious. Many teachers, social workers, coaches, and volunteers are happy in this box. For them, the journey is everything; there is no need to arrive.

Related: 5 Ways Volunteering Helps You Do Well While Doing Good

Reflect carefully on whether you are in the right box. If not, engineer a shift into your ideal box, whatever it takes. If you’ve found this blog post helpful, think about your friends and whether they are in the right boxes. For those who are not, give them the link to this post.