'American Factory' shows three years in the life of a Chinese factory erected on the site of a shuttered GM auto plant.

This story originally ran May 1, 2019. It has since been awarded the Academy Award for Best Documentary Feature.

These are just some of the beliefs about Americans that Chinese supervisors hilariously and alarmingly feed to their Chinese workers. The odd thing is that those briefings aren’t taking place in China but in the American heartland: Dayton, Ohio.

So begins American Factory, the intriguing new Tribeca Film Festival documentary (and upcoming Netflix offering) which had its New York premiere on April 26 and was one of five festival films curated by four New York-based film critics.

The story: In 2015, Cao Dewang, chairman of Fuyao Glass America, arrived in Dayton to check out the construction and hiring progress for the U.S. branch of his world-leading automobile-glass company, on the site of a shuttered GM plant. He was attempting to do the seemingly impossible: put Chinese workers to work alongside American workers and meld their two dramatically different cultures.

Here, after all, were American workers insisting on limiting themselves to an eight-hour workday; holding an election to consider inviting in the UAW union; and pressuring the company for a rigorously safe factory environment (1,200-degree glass furnaces and the very breakable product they produce being dangerous to human health.)

Are the struggles revealed in the film cause for alarm for American entrepreneurs working with or considering partnering with the Chinese companies? “We’re not making a promotional film to promote working with China or not working with China,” Steven Bognar told Entrepreneur following last week’s screening and Q&A.

In the film, executive-produced by Jeff Skoll, Participant Media's founder (and eBay's first president), we view an initially hopeful scene: Hundreds of workers are being promised new jobs, having been laid off by GM in 2008 ( a devastating event which Bognar and Reichert chronicled in their Oscar-nominated film The Last Truck).

In 2015, this sudden new influx of jobs, designed to revive that Rust Belt city from its long economic nightmare, are far better than those at the Payless distribution center or at McDonald's. That's why new energy and optimism abound at first in this Ohio city, which once had more automobile manufacturing than any metropolis outside Detroit.

No wonder Chairman Cao wants to document his great project: "The important thing is how this will change the American view of China," Cao says in the film.

Bognar-Reichert were natural choices to be the filmmakers, but they insisted on and got editorial control. "He's kind of a maverick," Reichert said of the chairman during the Q&A. "It wasn't as though many American CEOs would allow filmmakers to be in their plant for three years." GM, she commented dryly, had allowed the filmmakers into its former Dayton plant for a grand total of 20 minutes.

Bognar echoed this upbeat view of Cao, saying "He believes in transparency." That is apropos for a glass manufacturer but it also allowed for amazing insights into the lives of the workers the filmmakers profiled during the factory's first three years. Among them were:

Wong He, a 20-year veteran furnace engineer at Fuyao China who has been brought to Dayton for a difficult two years away from his young family. In Dayton, he lives with four other Chinese men. During the day he's so attuned to working that his "lunch" consists of a packet of Twinkies.

Rob Haerr, a furnace supervisor who invites his Chinese co-workers to his country home for an American Thanksgiving, where the men dine on turkey, try out Haerr's Harley and practice target-shooting using his twin revolvers.

Jill Lamantia, a forklift operator, who was economically felled by the 2008 layoff and recession, but is able, thanks to her new Fuyao job, to move out of her sister's basement. Delight turns to disenchantment, however; and Lamantia becomes a union supporter and is fired for it.

John Crane, a safety manager at Fuyao who grows frustrated at the safety issues at Fuyao and at being forced to lie to Fuyao's automotive company clients. He eventually resigns. 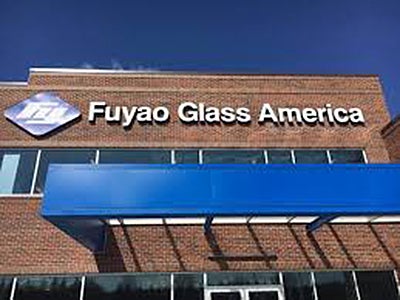 Things quickly went south at the Dayton plant. "All the Chinese workers were so loyal to the company," Lulu Men, a Chinese field producer for the film, said during the Q&A. "They had this culture of having been trained to dedicate their lives to the company. The difference is, Chinese culture is all about unity, and the American [culture] is about individuality. So I think that made a huge difference, and a culture clash."

Serious injuries proliferated. OSHA fines were levied. American supervisors were replaced by Chinese. The American workers complained about being forced to train off the clock and about their wages -- pre-treatment inspector Shawnea Rosser tells the filmmakers she used to make $29-plus an hour at GM; at Fuyao, she says, her wage is $12.84.

The Chinese workers also complain; their American workers are heading home after eight hours while they work 10 and 12 hours and come in weekends, they say. "I think they are hostile to the Chinese," Chairman Cao tells his board members, noting a $40 million loss in the plant's first months of operation.

Another overall difference: "Workers in China are given orders, and they tackle them," Reichert says in the film's production notes. "Here in the U.S., workers want to know why they're being asked to do something; they also expect there will be some praise."

More happily, the film chronicles a big Chinese New Year's party at Fuyao's Chinese headquarters in Fujian Province, to which about a dozen U.S. supervisors are invited. These scenes in the film are somewhat comic to Western eyes: big-bellied Midwestern white men towering over their Chinese bosses. Chinese workers lining up for their morning check-in, in military formation, and singing out motivational company slogans ("To stand still is to fall back.")

Meanwhile, the party itself is an over-the-top three hours of garish costumes, fervent songs about the company's "blessings" and even a wedding of five employee-couples. "We're one big planet. A world somewhat divided but one," a teary-eyed U.S. supervisor says to the camera late in the alcohol-fueled evening.

But back in Dayton, there is no partying. Workers are unhappy ("Everybody is upset in their own language and everybody just walks away," Lamantia, the forklift operator, says.) The workers set an election to try to bring the union in.

The company, for its part, is not amused, spending $1.25 million to hire the Labor Relations Institute (its motto: "Winning NLRB elections for almost four decades") to dissuade a "yes" vote. Ultimately, the union is rejected, 868-444, but its supporters are fired -- an illegal action in the United States, Reichert says, but hardly an uncommon one.

The film ends with flows of workers, Americans and Chinese alike, entering and leaving their shifts. Added in are voiceovers by workers -- with comments like, "We're never going to make that kind of [GM] money again," versus, "I believe in the American Dream; we can't give up on that."

Back in China, Chairman Cao is also filmed, making the extraordinary statement that when he looks back on his life's journey from intense poverty and the Cultural Revolution to today's capitalism, he asks himself, "Am I a criminal or a contributor?"

"One thing we tried to do is not root this film in Midwestern unease about China," Bognar said at the Q&A. "I think China is a miracle in many ways: Millions of people are no longer in poverty because of this amazing last 30 years. So we hope this movie sparks conversations and gets people talking about these issues, with the hope that they'll focus on people, whether they're Chinese or American.

"Is this global hypercapitalism sustainable?" Bognar continued, repeating the question he asked himself throughout production. "And what is the impact on the environment and working people?"