The New Face of Longevity: Dwayne Clark's Solution to America's Silver Tsunami Crisis and How Living on Stolen Potatoes Made It All Possible

Let the business resources in our guide inspire you and help you achieve your goals in 2021.
November 21, 2019 10 min read
Opinions expressed by Entrepreneur contributors are their own.

If you ask Dwayne Clark, founder and CEO of the senior care company Aegis Living, what he is most thankful for in life, he will unabashedly tell you “growing up poor.”

For Clark, a childhood spent in poverty instilled a compassion-first mentality and a burning desire to help others lead lives of dignity.

Today, Clark is seen as a change-maker in his industry. Aegis opened its 32nd location this year and has eight more facilities in development. The company is on track to have operating revenues of over $300 million in 2020, with real estate holdings approaching $3 billion.

Clark is the youngest of four children raised by a single mother in Walla Walla, Washington. When he was 16, his mother told him they were completely broke and had no money for food. 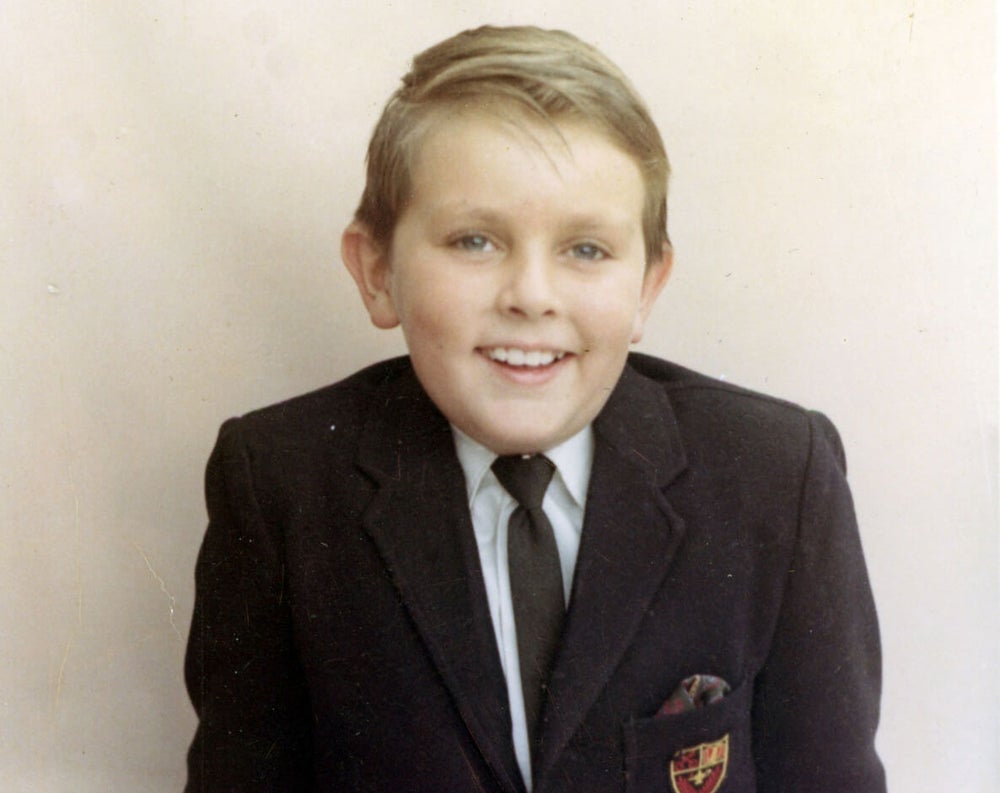 The youngest of four children, Clark was raised by a single mother who struggled to feed her family.
Image credit: Dwayne Clark

To feed her family, she made potato soup from a bag of potatoes she’d stolen from the restaurant where she worked as a line cook. She vowed to replace the potatoes when she had money again. While Clark felt powerless to help his mother, he remembers being in awe of her strength and resilience.

“My background truly is a gift to me,” he says. “It helps me relate to the dishwasher and has given me an affinity for struggling immigrants, for the poor kid, whoever needs help. If I hadn’t grown up knowing what being hungry is really like, I would not have created the business I run today.”

By the time he was 26 years old, Clark had worked his way up from a correctional officer to shift commander at Washington State’s Department of Corrections. He was good at it, but he hated the job. He wanted to go back to college (he’d dropped out in his junior year) and then to law school, but his sister interrupted these plans with a call out of the blue. She insisted he read a new study about aging in America.

“This was before we had the internet and I could just pull it up on a computer; so I went to the library to look up the study,” says Clark. “It was around 400 pages. I didn’t particularly want to read it, but it seemed important to her. So I read the whole thing and realized there was a silver tsunami coming fast.”

He learned that life expectancy was on the rise and the elderly population was expected to double. His takeaway: eldercare was going to be a booming industry. Clark’s sister was on the advisory board of one of Leisure Care’s communities, so he asked her to help get him an interview.

“I didn't want this to be a courtesy 10- to 15-minute interview. So when they asked if I could come in for an interview that next week, I said I could come in 30 days,” says Dwayne. “I wanted to do my research on the company, their competitors, and the industry. I wanted to be the best interview they’d had in 10 years.”

Thirty days later, Dwayne went in for the interview, and, as expected, they asked a few cursory questions, spent no more than 10 minutes with him, and thanked him for coming in. Before they could shoo him out the door, Dwayne reached into his backpack and pulled out a three-ring binder and dropped it on the desk in front of him.

“I’d like to talk to you about where I think the aging industry is going and how I think I could contribute,” he told them. Clark says they spent the next 90 minutes going over his manual, and they made him a job offer within the week.

Leisure Care hired Clark as the marketing director in Colorado. Forty-five days later he was put in a manager training program, and two years later he was named VP of Operations.

At age 33, Clark was recruited by Sunrise Senior Living, which would the biggest senior housing company  in the world. In less than five years he helped grow Sunrise from an $18 million company to a company with a $3 billion market cap.

Despite his seemingly overnight success in the eldercare industry, Clark wasn’t satisfied working for a public company. He decided to quit and make his own way.

“It wasn’t in my personality, and I didn’t like what Wall Street did to the culture of the companies,” says Dwayne. “I thought I needed to just do it on my own.”

“You need a significant amount of money to do well in the senior care industry, and I don’t mean $10 million; I mean tens of millions of dollars,” he says. “Today you would need $150 million to start a company like Aegis.” 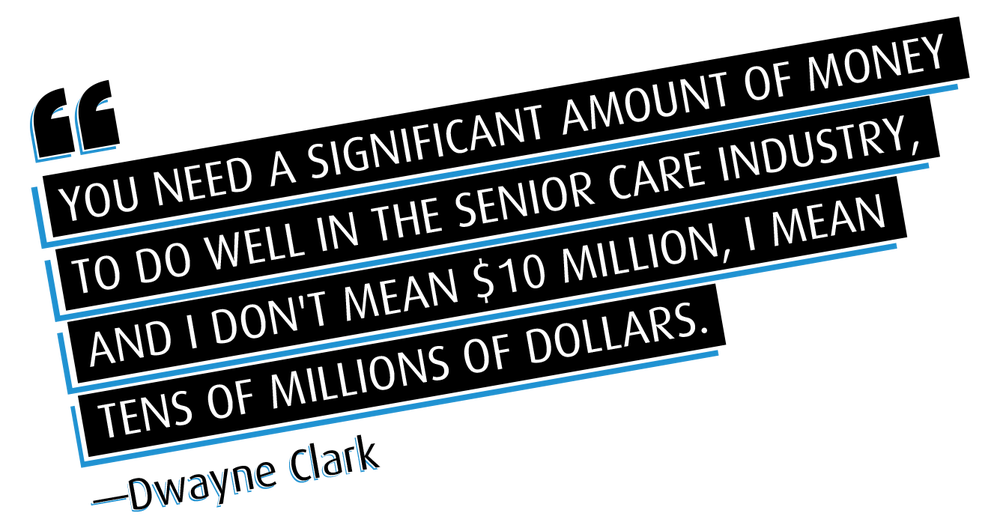 Dwayne spent much of 1996 looking for partners and capital sources and eventually found the right person: a developer in California named Bill Gallaher, whom Clark had built a relationship with during his time at Sunrise.

Together they founded Aegis, were able to raise $10 million, and built their first property in Pleasant Hill, California, in 1998. But it wasn’t all smooth sailing.

“I underestimated just how capital intensive the process was,” says Clark. “We burned through that first $10 million in six to nine months.”

After two more rounds of capital financing, which yielded another $12.5 million, Gallaher called and told him they were out of money. By this point, Clark had exhausted all his resources — except his son’s college fund.

“My son had just committed to UCLA, his dream school,” says Clark. “I needed the college money to cover payroll or Aegis could not stay afloat. I had to go to my son and have a tough conversation. I said, ‘You know, that in-state tuition at the University of Washington looks really good.’”

Thankfully, his son understood and never felt bitter about the decision to abandon UCLA. Clark credits the college fund for saving the company.

In 2007, Clark says he bought out Gallaher due to a difference in philosophies. He took full control of Aegis and set out to grow it into the premier assisted living community on the West Coast.

As the company expanded, Clark became an expert on how to care for people with Alzheimer’s and dementia. He believed he’d learned everything there was to know about how to manage this type of care facility until the day he received a massive blow that challenged him as a CEO and son: his mother was diagnosed with Alzheimer’s. 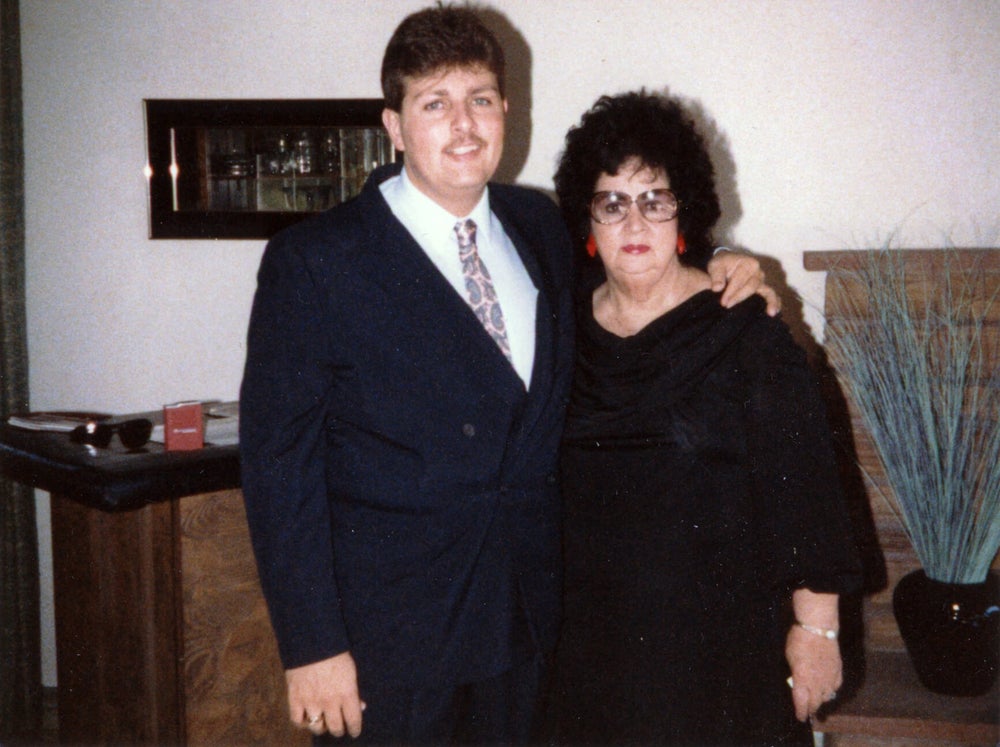 When Clark’s mother, Colleen, was diagnosed with Alzheimer’s, he became inspired to find ways to improve the lives of other Alzheimer’s and dementia patients living at his health-care facilities.
Image credit: Dwayne Clark

“Imagine the feeling of being ‘the guy’ leading the industry in this type of care but I couldn’t help my own mother,” admits Dwayne.

She moved into one of his memory-care communities, and Clark began to have a major shift in perspective. “It was a game changer,” he says.

His mother loved music; so Clark read studies on the positive effects of music on patients with dementia and Alzheimer’s and expanded the music programs in his Alzheimer’s wing.

She also loved doing her hair and make-up, which became harder as her illness worsened. As a result, Clark brought traveling salons to his senior health communities to give all the residents makeovers. This started a long list of improvements throughout his facilities that weren’t always good for his company’s bottom line but he believes improved the lives of the residents. Clark says he created hundreds of “longevity aids,” including aromatherapy to improve mental clarity, spring-loaded chairs to allow seniors to stand without assistance, and shorter hallways to facilitate walking.

Clark also took action to create a culture where employees feel genuinely invested in and cared about.

“I want to be an employee-first company because I truly believe culture is everything,” says Clark. “We are a service-oriented company that aims to do our part in treating the Alzheimer’s epidemic by serving the high-risk communities of senior health.”

Clark created a program called E.P.I.C. (Empowering People Inspiring Consciousness) to transform Aegis Living’s annual meeting from a traditional “year-end review” to a three-day celebration of the human spirit. It is a seminar for self-improvement with the primary agenda to ignite personal development among the employees. E.P.I.C. attracts celebrities like Michael J. Fox, Carlos Santana, and Dr. Deepak Chopra to teach and inspire his employees.

Clark says one of his lifelong obsessions has been the pursuit of health — understanding it and attaining it. As a young adult, he lost sight of that passion and burned the proverbial candle at both ends. He worked long hours, lived on a junk-food diet, partied late into the night, and slept very little.

Everything came to a head one Labor Day weekend with his wife, when he began to experience the most acute abdominal pain of his life. It was so bad that he ended up in the hospital where he was diagnosed with severe gastritis.

Clark says the experience was a wake-up call. He’d learned so much caring for people well into their 100s, but ironically, he’d never consciously applied those lessons to himself.

“My health crisis inspired me to seek out longevity, study it, achieve more of it, and share my findings with a broader audience,” says Clark. “While I’d been living and breathing questions about the health and longevity of my Aegis residents, I’d separated myself from what I’d learned. Overnight, my commitment changed.”

Dwayne became a “longevity explorer,” traveling to over 80 countries to interview hundreds of people on what it means to age well into their 80s, 90s and 100s. His obsession with health and longevity led him on a journey of research into finding every conceivable way to live a more vibrant, healthier, and more fulfilled life.

In his latest book, “30 Summers More,” Dwayne takes what he has learned about longevity by caring for more than 60,000 residents and writes a new plan for aging in America. He challenges the status quo for people over age 60, using the wisdom of Aegis residents. 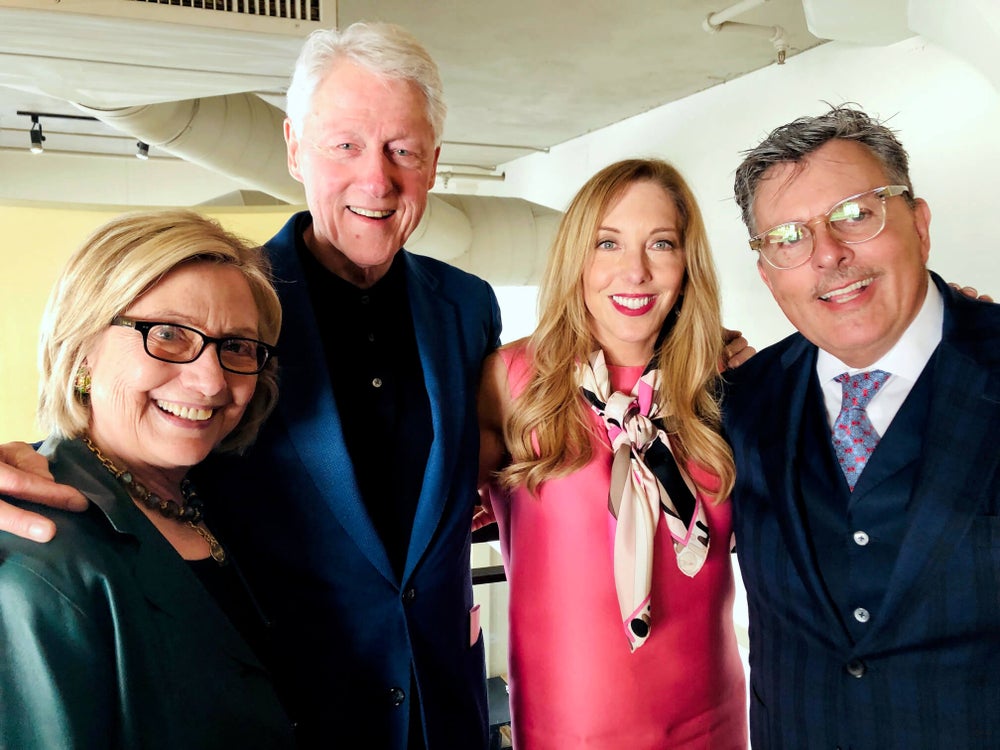 He’s also taken an interest in exploring what makes successful people tick, and Clark’s recently launched podcast, “Walk This Way,” discusses the journey of CEOs, athletes, and celebrities and how they made their way to hit mega-success by not following the traditional path.

Clark’s own path was no doubt untraditional.

“I have never had a ‘woe is me’ mentality or seen my background as a drawback,” says Clark. “Entrepreneurs share one thing: they’re trying to run as fast as they can away from poverty. It creates rocket fuel for them to be successful.”

How Franchising Helped This Founder Scale His Business

Meet the Fearless Female Franchisors Who are Living Their Dreams