Here Come the 'Star Wars' Scams: Don't Fall for Them

Cybercriminals are using 'Star Wars: The Rise of Skywalker' as bait by creating fake websites that claim to offer free access to the film. But in reality, the websites try to trick you into handing over your credit card information.

By Michael Kan December 23, 2019
This story originally appeared on PCMag

Desperate to watch the new Star Wars film? Don't get too desperate. The movie, which opens tomorrow, is the latest pop-culture phenomenon to be exploited by cybercriminals to trick people into installing malware or handing over credit card information.

Antivirus provider Kaspersky Lab has already uncovered more than 30 fake websites and social media profiles that pretend to be official movie accounts. The scam works by offering users free streaming access to Star Wars: The Rise of Skywalker, but only if they first register with the fraudulent site by typing in their credit card information.

"To further support the promotion of fraudulent websites, cybercriminals also set up Twitter and other social media accounts, where they distribute links to the content," Kaspersky Lab said in a Thursday report. 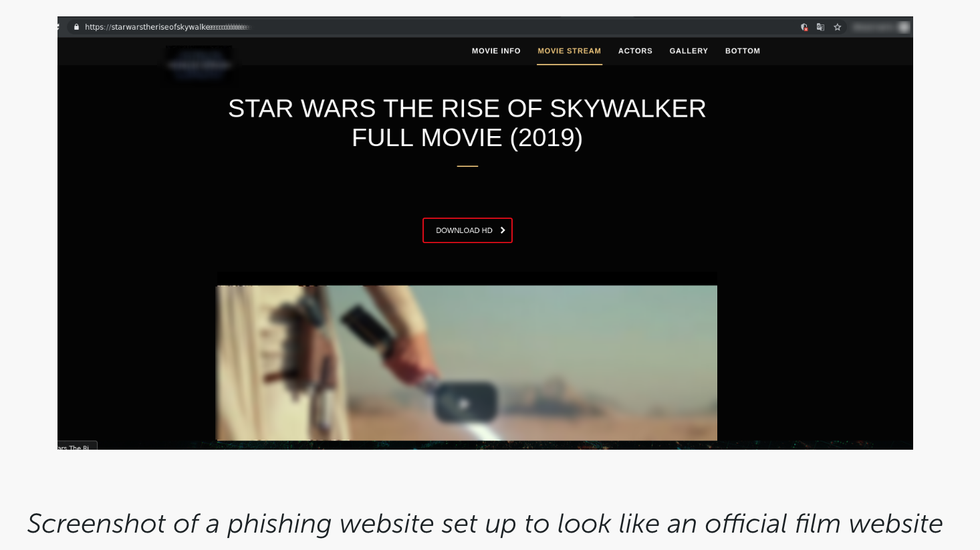 In addition, the company has noticed cybercriminals trying to exploit the film by spreading malicious torrents and files that claim to offer the movie. So far, Kaspersky Lab has detected 65 malicious fake copies of the film infecting 83 users.

"It is typical for fraudsters and cybercriminals to try to capitalize on popular topics, and 'Star Wars' is a good example of such a theme this month," said Kaspersky Lab security researcher Tatiana Sidorina in the report.

Related: 10 Star Wars Quotes That All Entrepreneurs Should Take to Heart

Indeed, hackers routinely use pirated copies of popular TV shows, such as Game of Thrones, as a way to fool users into installing malware. In some cases, the hackers can place the malicious code inside a Trojan application or shortcut within a torrent disguised to contain the pirated episode.

According to Kaspersky Lab, Star Wars has become a popular lure as well. This year, the company detected 285,103 Star Wars-related malware infection attempts on users, who were trying to watch the sci-fi series. The infection attempts amount to a 10 percent rise from last year.

You can find the scam Star Wars sites with a simple Google search, using keywords like "star wars the rise of skywalker free download." The scam sites probably won't fool Star Wars fans, who will want to watch the new film in theaters anyways. Nevertheless, certain markets such as Vietnam and The Philippines won't get access to the film until early next year. Others may prefer to pirate the movie rather than pay for tickets.

Related: Star Wars: The Last Jedi Has Some Important Business Insights for Entrepreneurs