10 Signs People Believe In You and Want You to Succeed

Veteran FBI agent Robin Dreeke breaks down verbal and non-verbal cues that the people around you are authentically in your corner.

By Robin Dreeke January 24, 2020
Opinions expressed by Entrepreneur contributors are their own.

Can you trust this person you're about to make a deal with? Is your boss about to fire you? Do the members of your team truly believe in your vision?

Sure would be nice to know these kinds of things, right?

In his new book, SIZING PEOPLE UP: A Veteran FBI Agent’s User Manual for Behavior Prediction, Robin Dreeke, the former head of the FBI's Counterintelligence Behavioral Analysis Program, shares his process for recognizing people's "tells" — those physical and verbal ticks that can reveal a person's true thoughts and intentions.

Dreeke hopes that his book will "empower you to work through the most intense and complex situations with complete confidence and sense of crafting your own future." In the following excerpt, he outlines ten signs that the people around you not only believe in you, but also believe that they will directly benefit from your success.

1. People are happy to work at your tempo, and in your work style instead of theirs. There are people who just won’t allow others to disrupt their way of doing things, and they tend not to vest in others simply because we all have somewhat different ways of getting things done.

People who are comfortable vesting in others, though, are proud of bending over backward to accommodate the needs of their close associates.

Related: 10 Ways to Develop an Unshakable Belief in Yourself

2. People typically talk in terms of your own priorities, interests, and prosperity. They make you the center of attention because they see you as their surrogate and don’t need to recapture the spotlight for themselves. The wise response is to grant them the same courtesy and commitment.

3. People look for ways to expand their relationship with you. They seek further common interests, and include you in many of the important things they do, even if it’s not something you can do on a level equal to theirs. They’ll find a way to employ your skills. They will also bridge the gap between personal and professional relationships — by bringing you into their personal life if you work together, or by sharing their professional life with you if they’re a social friend.

4. People join you in a difficult project even when they would rather not. On several occasions, colleagues of mine have been assigned to something that felt like a death march to me, but I’ve volunteered to join them out of personal consideration. There’s no better foundation for vesting than to suck it up and dive in.

A less dramatic but still meaningful way to show you’re vested in someone’s success is to work unpaid overtime with them, especially if you can contribute something they can’t. As always, actions speak loudest. That’s partly why I volunteer as a pilot for a medical airlift organization. It’s time and resource-intensive and is the most action-oriented contribution I can make.

Related: How Do You Get People to Believe in Your Business? Tell a Good Story.

5. People call in their own favors on your behalf. Cashing in the currency held in someone’s own “favor bank” is a huge tell of vesting. It not only signals the proactive willingness of their help, but also often creates a new relationship for you, if you meet the person who owed the favor.

It can also create what’s called the Benjamin Franklin Effect: When someone does a favor for you, it makes them like you more, because they’ve invested in you and would suffer from cognitive dissonance if they didn’t like you. It’s almost pure elixir of vesting. Franklin discovered it when he borrowed a book from an enemy and found that the guy no longer disliked him.

6. Virtually all of someone’s positive actions are unsolicited. I call this the “initiative test.” If someone helps you on their own initiative, it indicates much more vesting than if you have to ask them for help.

It shows even more vesting if they create new forums, tasks, or venues that are intended to help you, such as forming a committee and putting you at its head.

7. People create a positive image of you inside and outside of your company, and give you credit for success that they were involved with, at the expense of their own credit. This form of self-branding not only connotes faith in their connection with you, but also reveals the generosity and emotional stability of their own personality.

If this extremely valuable tell comes from an immediate supervisor, it shows that they care enough about you to risk the chance of losing you to another company or division — or even to run the risk of you taking their own job.

People who consistently create a positive brand for you are pure gold. Treat them well and the mutual trust will run deep.

8. People show genuine excitement about your achievements. That’s usually because they see your success as theirs, too, but it can also indicate pure generosity. If they don’t show excitement, but seem to be guardedly resentful or jealous, you may want to find another ally.

9. People extend their professional relationship with you into a social one. This is huge and also very common. The bilevel connection creates two separate, mutually reinforcing forms of commitment. It also indicates that they enjoy you as a person, and not just someone who can help them.

10. People tell you something they’ve never told anyone else.
This is huge!

They trust your discretion and advice, and see you as nonjudgmental.

Of those values, the one I admire most is the refusal to judge, which strongly encourages the people around you to be honest. It also creates a relaxed, congenial atmosphere.

When someone opens their heart to you, you can’t help but see yourself in a better light. It quiets your self-criticism, and helps you rise above being your own best enemy. 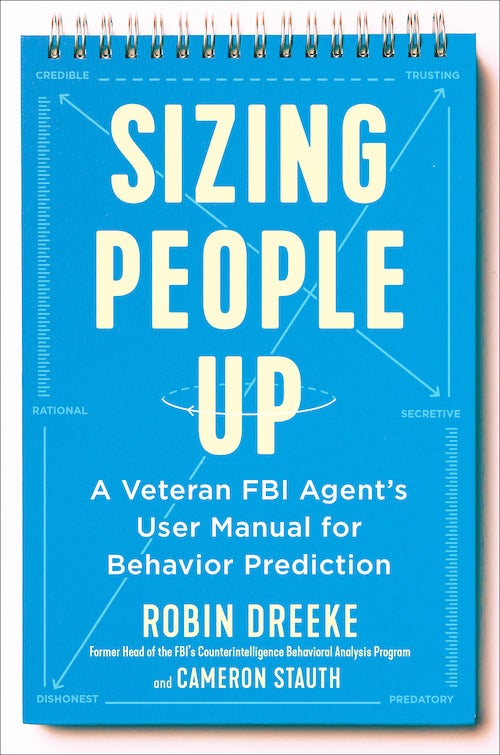 Excerpted from SIZING PEOPLE UP: A Veteran FBI Agent’s User Manual for Behavior Prediction by Robin Dreeke and Cameron Stauth published by Portfolio, an imprint of The Penguin Publishing Group, a division of Penguin Random House, LLC. Copyright © 2020 by Robin Dreeke