Should You Buy Coinbase After a Correction?

One of the biggest stories this year has been the rise of crypto currencies such as Bitcoin, Ethereum, and now Dogecoin. Coinbase (COIN) serves as a platform for digital currency trading. The company recently went public, but should you invest in its shares? Read more to find out.
Next Article

This book gives you the essential guide for easy-to-follow tips and strategies to create more financial success.
Andrew Hecht
April 26, 2021 7 min read
This story originally appeared on StockNews
One of the biggest stories this year has been the rise of crypto currencies such as Bitcoin, Ethereum, and now Dogecoin. Coinbase (COIN) serves as a platform for digital currency trading. The company recently went public, but should you invest in its shares? Read more to find out.

The Chicago Mercantile Exchange (CME) and Intercontinental Exchange (ICE) are highly successful trading platforms with long histories as growth stocks. Last week, Coinbase (COIN) listed its shares. COIN is the platform for digital currency trading. As the market matures, COIN is now in a leadership position in cryptocurrencies.  On the first day of trading, COIN’s market cap was higher than either the CME or ICE, a testament to the growing digital currency market. COIN did not go the traditional IPO route when it listed shares on the NASDAQ.

On April 14, the shares rose to a high of $429.54. The market cap peaked at the $100 billion level. COIN pulled back to the $291.60 level at the end of last week. The prospects for the shares are bullish as the asset class continues to grow at a parabolic rate. Meanwhile, the post listing correction and selling in the digital currency arena could create a buying opportunity for COIN.

The ascent of cryptocurrencies has been unprecedented

Bitcoin was at around six cents per token in 2010. It recently traded to a high of $65,520. To put that number in perspective, a $1 investment eleven years ago purchased 16.67 Bitcoins. At the recent high, that one dollar was worth over a cool million.

The asset class’s market cap was at over the $2.3 trillion level at the recent high. Bitcoin gave birth to thousands of other tokens. At the end of last week, 9,437 tokens were floating around in the crypto universe. Each day, new tokens appear.

Meanwhile, only five tokens have market caps over the $40 billion level. Bitcoin and Ethereum are the leaders as their combined values comprise 64.8% of the just over $1.879 trillion. Only fifteen tokens are worth over $10 billion, and those with over a $1 billion market cap amount to eighty-six tokens. The top 86 tokens are under 1% of the total, but they represent the lion’s share of the market cap.

Many of the other 9,351 coins will fade into the abyss in cyberspace, but there is always a chance that another Bitcoin, Ethereum, or any of the other billion-dollar and higher tokens is out there waiting to explode higher. The potential will keep speculators and investors flocking to the digital currencies in the hope of making millions. The latest success story was Dogecoin (DOGE).

The token that began as a joke appreciated from under one cent in January 2021 to a high of nearly 40 cents last week. DOGE was seventh on the cryptocurrency hit parade with an over $31 billion market cap as of April 23.

Several events have launched the price of Bitcoin, Ethereum, and other digital currencies. In late 2017, the CME’s listing of futures contracts propelled Bitcoin to the $20,000 level for the first time. On February 8, 2021, the CME sent Ethereum prices vaulting higher as it listed Ether for trading in the futures arena.

The latest move came on April 14 when COIN listed shares on the NASDAQ. The reference price before trading began was $250 per share. 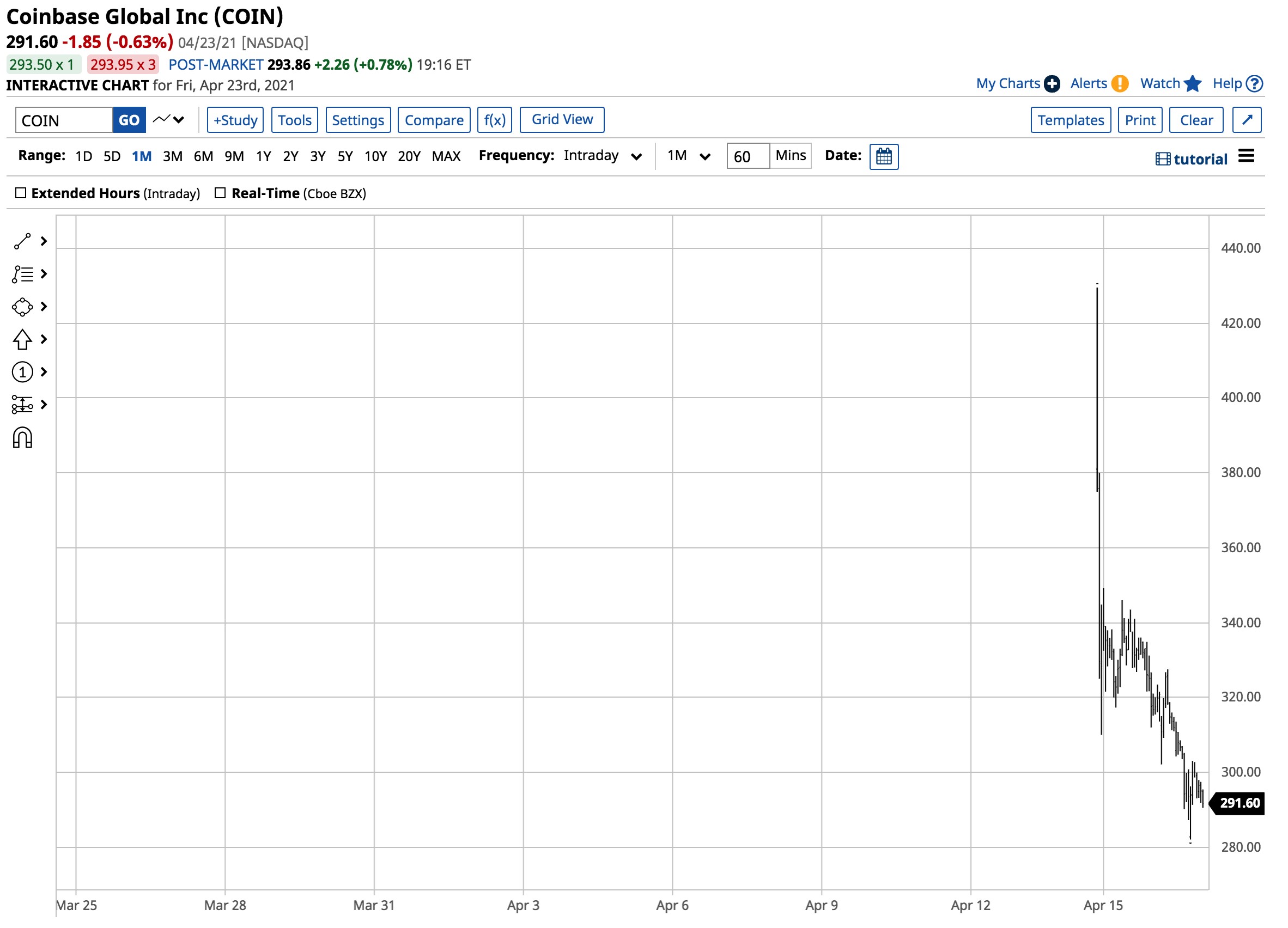 Around the time of the COIN listing, Bitcoin and Ethereum reached their latest record highs. 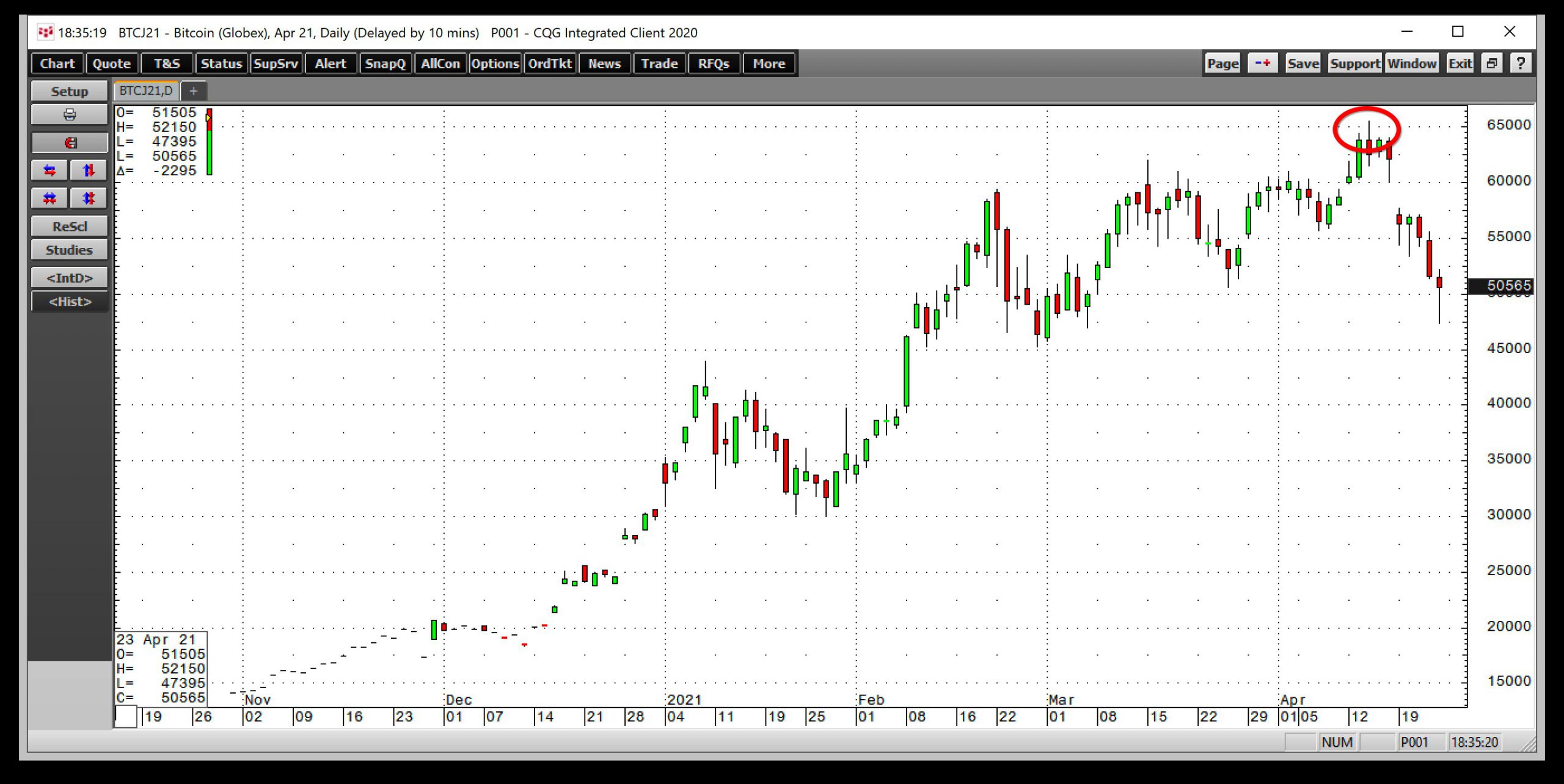 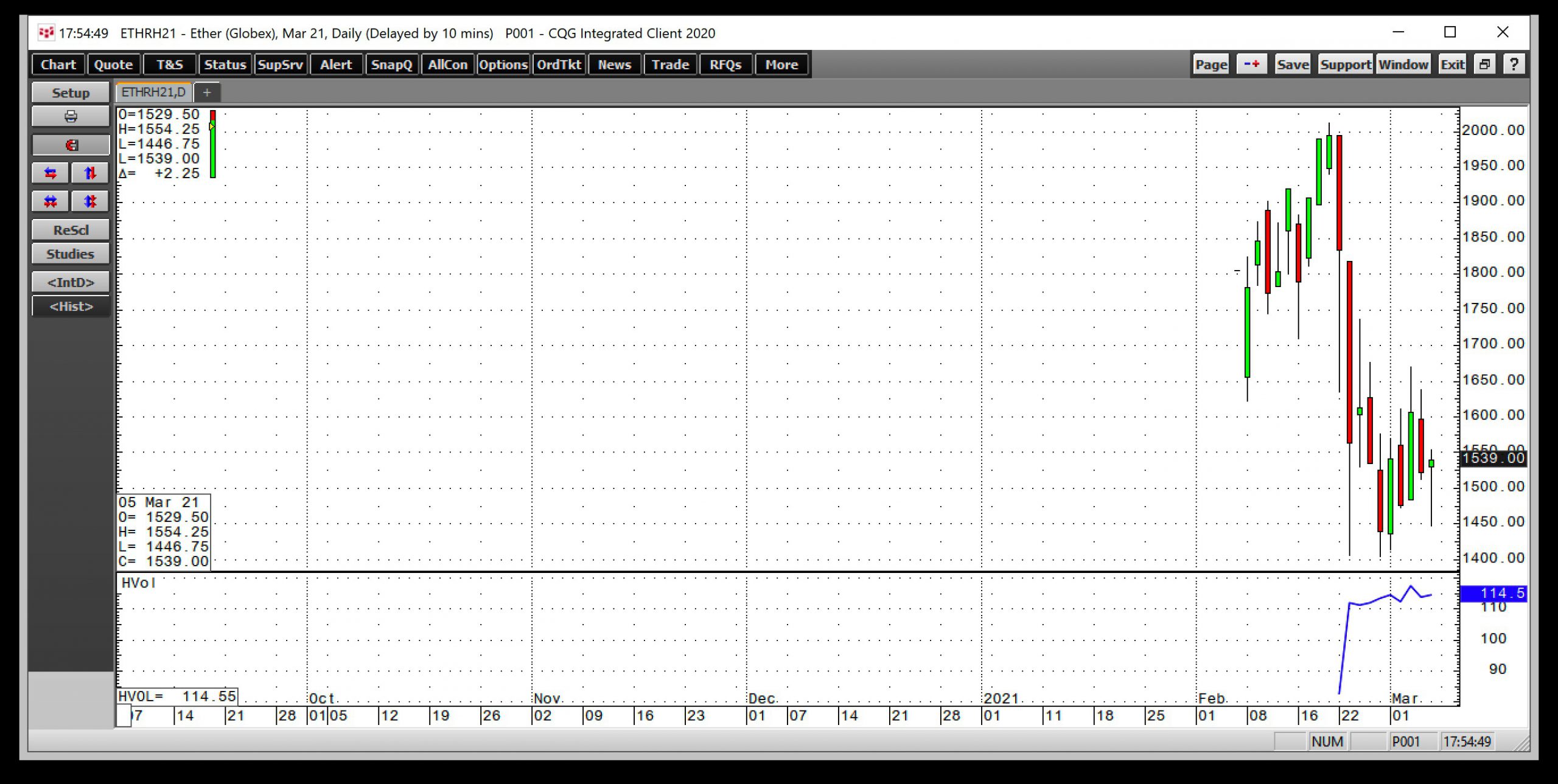 The digital currencies’ profile has been rising with the token’s prices. In September 2020, Jack Dorsey’s Square (SQ), a technology-based payments platform, purchased $50 million at the $11,000 level and averaged up in early 2021 with another $170 million investment raising its average purchase price to the $25,000 level.

Elon Musk’s Tesla (TSLA) bought $1.5 billion worth of Bitcoin at the $31,250 level. SQ and other payment companies are processing digital currency payments, and TSLA and other businesses are accepting Bitcoin and other cryptos as payment for products.

As more companies invest in digital currencies and accept them as payment, the asset class becomes a mainstream means of exchange.

Over 9,400 tokens in circulation- The Coinbase listing is the next step in the market’s evolution

COIN provides financial infrastructure and technology for the burgeoning crypto economy. COIN provides primary financial accounts, a platform to invest, store, spend, earn, and use crypto assets. COIN is an online marketplace for hedge funds, money managers, and corporations. It also offers a platform and technology, and services to developers, merchants, and asset issuers that allow for building applications that leverage crypto protocols.

COIN’s platform serves users, institutions, and ecosystem partners. The company was born in 2012 and has headquarters in San Francisco, California. At $291.60 per share at the end of last week, the company has a $57.6 billion market cap. COIN is a platform comparable to the Chicago Mercantile Exchange (CME) and the Intercontinental Exchange (ICE). As of the end of last week, the CME’s market cap was $74.739 billion, and ICE’s value was $68.064 billion. On April 14, at $459.54, COIN’s market cap rose to an incredible $100 billion, as the platform was worth more than the two established exchange platforms.

As digital currencies become more mainstream means of exchange and investment vehicles, COIN’s profits will grow. After a highly successful listing on NASDAQ, COIN shares will likely continue to correct from the $429.54 high. As of April 23, they were falling. A logical downside target could be the $250 pre-listing reference price.

COIN shares are likely to trade higher and lower with Bitcoin and other digital currency prices in the near term. However, as the market matures and volumes rise, the platforms’ earning could experience explosive growth. The next significant event in the digital currency asset class could introducing micro or mini futures at the CME, which would increase the addressable market. ETF and ETN products would likely have even more impact on prices, the asset class’s market cap, and COIN’s share price.

As liquidity rises, COIN will be a primary beneficiary. COIN shares are a buy on a dip over the coming weeks and months. I would be a scale down buyer from the $250 level as the volatility in the digital currency arena is likely to continue on the up and the downside.

The post Should You Buy Coinbase After a Correction? appeared first on StockNews.com
More from Entrepreneur

Top Consumer Staples Stocks To Watch In May 2021

4 Fintech Stocks To Watch This Week

Hot Stocks To Buy Next Week? 5 Reddit Stocks In Focus

Marathon vs. Silvergate: Which Cryptocurrency Stock Is a Better Buy?