Why is Silver Not Rallying Despite Hot Inflation Data?

Silver (SLV) has underperformed in 2021 and failed to rally despite hot inflation readings. Taylor Dart breaks down what's really happening and why th...
Next Article

It’s been a frustrating start to the year for investors in the precious metals complex, with investors getting what they were hoping for from inflation figures but not seeing any positive reaction from metals prices. This is despite inflation hitting a 13-year high for June at 5.20%, pushing real rates further into negative territory to a reading of (-) 5.30%. Typically, this backdrop is good for metals prices and makes for the best time to be holding silver (SLV) and miners, with previous periods being 2004-2009 and 1974-1980. Not surprisingly, this disconnect is turning many former bulls into bears and making many second-guess their position in the trade. The good news is that the technical charts suggest little reason to be cautious, with their most bullish setup in place in more than a decade. Let’s take a closer look below: 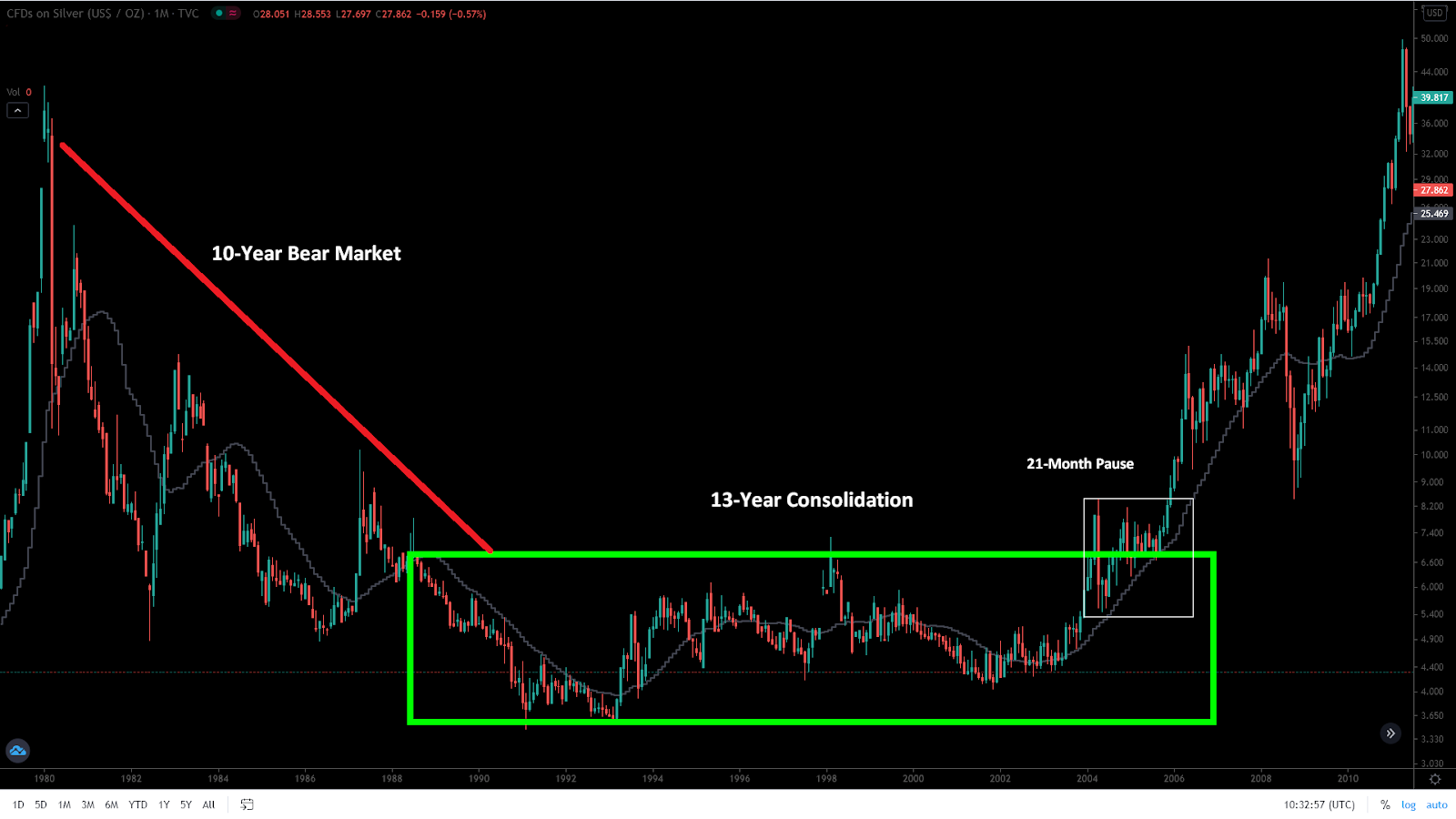 If we look at the chart above, we can see that the 1980-2005 period was a lost quarter-century for silver bulls, with the price spending a decade in a bear market before spending nearly 15 years going sideways. This complete reset in the market following the parabolic bull market that ended in 1980 created the conditions for a massive bull market from 2005-2011, with the silver price soaring by more than 500%, from $7.00/oz to above $40.00/oz. Since the parabolic 2011 peak, we’ve seen a similar setup, albeit on a shorter time frame, with silver spending 2012-2016 in a bear market, 2016-2019 going sideways, and the metal finally breaking out of its range in 2020. Since then, we’ve seen very volatile trading with little upside progress since the July 2020 breakout, causing many investors to throw in the towel on the trade. However, on closer inspection, silver did this exact same thing nearly twenty years ago, breaking out in 2004 before spending nearly two years going nowhere in a volatile sideways range. The key, however, was that the metal was holding above its breakout level, confirming that the breakout was still valid.

Following a successful breakout from silver’s base-on-base pattern in late 2005, silver rose by more than 140% over the following two years, soaring from $8.50/oz to $21.30/oz. With a similar setup in place currently, and the equivalent of the $8.50/oz base-on-base breakout level being $30.00/oz, silver could double in the next three years, assuming that the bulls can confirm the pending base-on-base breakout. Obviously, history doesn’t have to repeat itself, and we could see a less violent advance given that silver trades at a much higher level than it did in 2005, but even at half the gain in two years, this would place silver above near $50.00/oz. 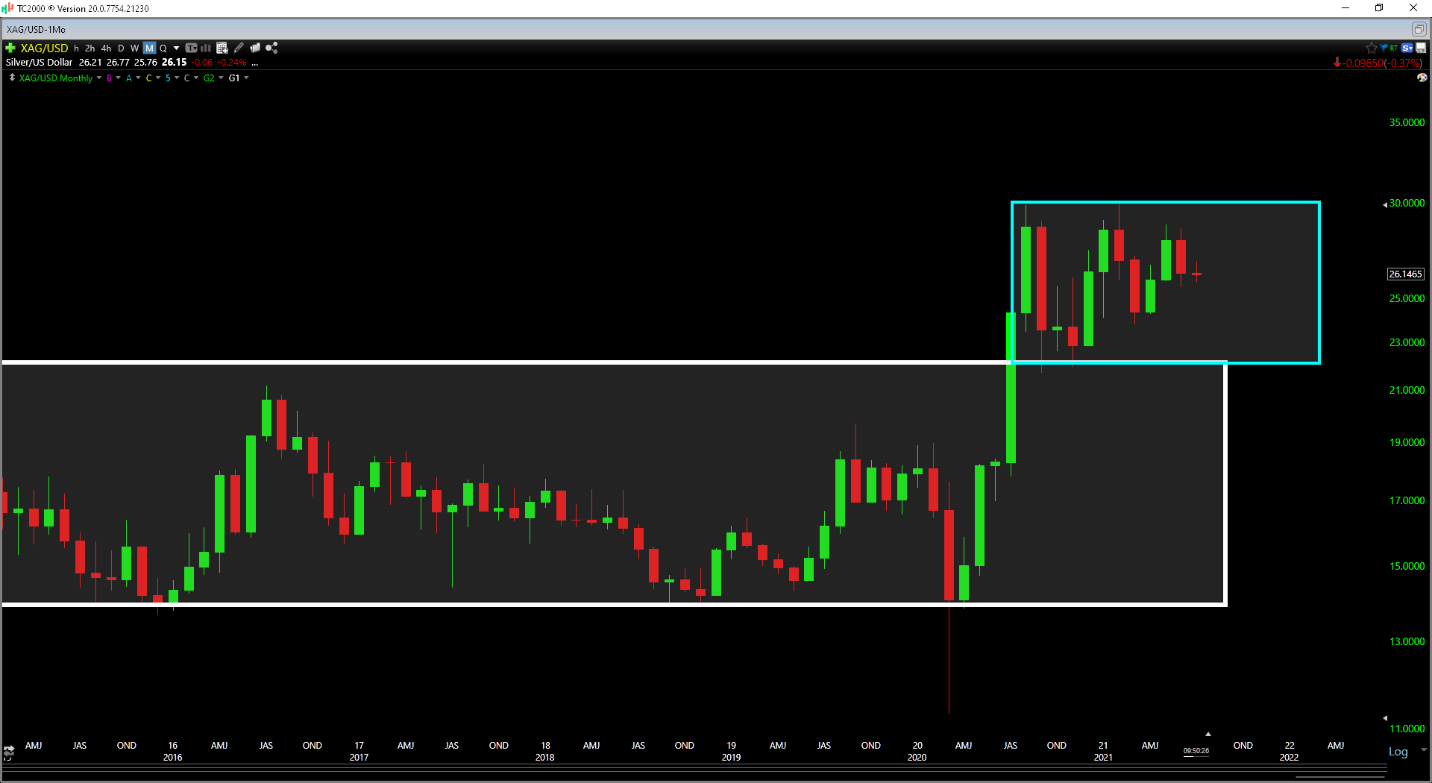 While this is a very bullish setup, and silver continues to carve out a similar pattern, it’s important to note that silver must breakout above $30.00/oz and hold above this level on a monthly closing basis to confirm this breakout. While silver is in this range, we have a similar setup in place to H2 2005, but we do not have confirmation. So, to unlock this upside potential, investors are going to want to see a silver breakout above $30.00/oz before year-end and not look back. So, investors should take comfort in the fact that this choppy price action is completely normal even after a massive breakout and not lose sight of the big picture.

With silver currently sitting near the mid-point of its base-on-base setup and coming off a sharp correction, this looks like an ideal time to begin exposure in the metal. This is because investors have a risk of $21.00/oz on the downside, which would invalidate this setup, and an upside of more than $15.00/oz in the next 18 months if this setup does play out similarly to the previous secular bull market breakout. Given this backdrop, the reward to risk is exceptional at $26.00/oz, with a 3 to 1 reward to risk and the potential for better if silver follows the 2005-2011 playbook. In summary, I believe this is an excellent time to acquire the best silver miners and start a position in silver. I would view any further weakness below $24.00/oz as an opportunity to add to positions.

Disclosure: I am long GLD, SLV

The post Why is Silver Not Rallying Despite Hot Inflation Data? appeared first on StockNews.com
More from Entrepreneur

3 Upgraded Stocks to Buy With the Market Approaching New Highs