Can they force you to get vaccinated at work?

We consulted two experts in labor law to find out what you can do to handle the situation in your company and know your rights and obligations as an employee.

By March Violante August 24, 2021
This article was translated from our Spanish edition. Opinions expressed by Entrepreneur contributors are their own.

We are still trying to tame the third wave of COVID-19 thanks to the contagions caused by the Delta variant and many companies are delaying the return to physical offices until 2022. However, there are other companies that are already planning their return at least in hybrid model in autumn and winter.

According to a survey conducted by The Harris Poll for Glassdoor, nine out of 10 employees are concerned about returning to the office, not only considering the sanitary measures in their work areas, but also considering the trips to and from their home.

For this reason, many companies are considering the hybrid or staggered model to reduce the volume of people present in an enclosed space at any given time. However, there are some others that are putting firmer rules to resume operations.

As an example: United Airlines, the leading US airline, became the first company in early August to require employees to be vaccinated or else they will be fired. The company is proposing that all employees are fully vaccinated before October 27, 2021 at the risk of losing their job.

Immunization is voluntary and undoubtedly essential to be able to stop the spread of the virus and possible future mutations, but is it legal to force employees to be vaccinated at the risk of being fired?

We consulted two experts in labor law to find out what you can do to handle the situation in your company and know your rights and obligations as an employee.

Is there a legal precedent for health contingencies such as a pandemic at work?

It is complex. The greatest precedent we have was that of the influenza that happened in 2008, but in the Federal Labor Law, until 2012 began to speak about health contingencies.

“At the beginning of the pandemic they asked me if it was possible to reduce the salaries of the employees due to the crisis, obviously negotiated with the workers. Article 42 Bis. of the Federal Labor Law says that for at least one month, if a health contingency is declared that implies the closure of work centers, people could be sent home paying only the minimum wage for a maximum period of 30 days ”, explained Diego García Saucedo, managing partner of García Velázquez Abogados and member of the Mexican Academy of Labor Procedural Law.

However, and here is the detail , in no part of the Mexican labor law that refers to health contingencies does it speak specifically of mandatory vaccinations .

Let's be clear: In Mexico, are mandatory vaccinations in the workplace legal?

Article 134, fraction tenth of the Federal Labor Law says that “it is the obligations of the workers to submit to the medical examinations provided for in the internal regulations and other regulations in force in the company or establishment to verify that they do not suffer from an illness or incapacity for work. contagious and incurable ”.

"In my opinion as a jurist, the ability to ask employees to prove that they are already vaccinated could come in here," says García Saucedo. "This means that perhaps you do not want to be vaccinated, but you could be a contagious entity of the disease."

However, Jorge Salles Boyoli, a lawyer specializing in labor matters and partner at Littler, the world's largest labor law firm, points out that the answer in principle would be NO.

“The freedom to be vaccinated has been privileged. There are people who for medical, ideological and even religious reasons are not immunized. As it is being solved in Mexico, that is, what can be demanded and there are laws in this regard, is with the tests that show that you do not have the virus. 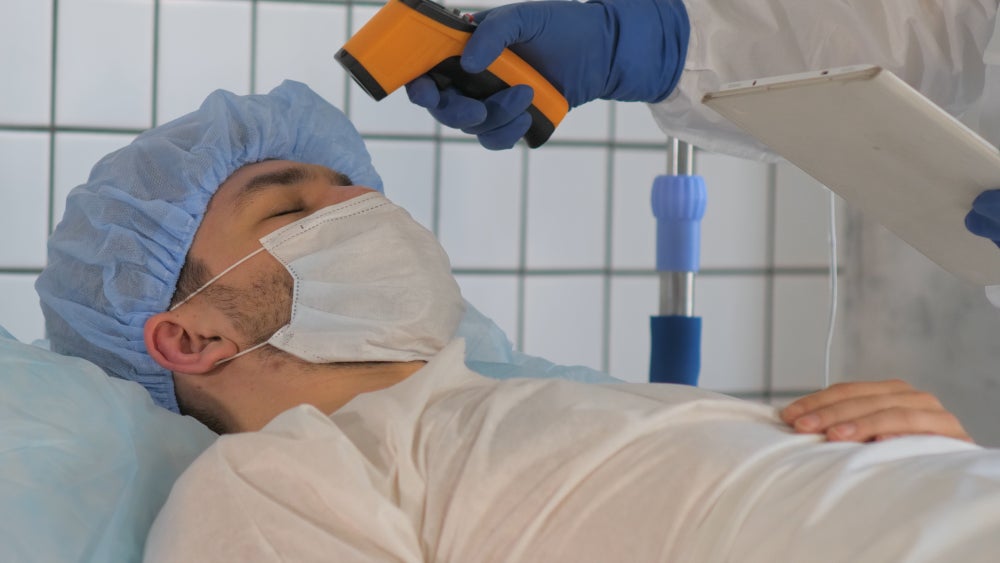 The freedom to be vaccinated has been privileged, but the boss can request antigen tests to be able to return to the office / Image Depositphotos.com

No vaccines, but tests yes

Although Mexican law is not very clear about the obligation to be vaccinated, it is in terms of the employer's ability to request medical tests.

"According to the legislation, in principle, the employer has the right to demand that the worker submit to the tests that he requests. As in many aspects the laws, as in many aspects, fell short of the pandemic. What does this mean? These laws do not speak of vaccines as such and immunizations do not fall within the definition of 'medical examinations or tests' that the boss can request, "said in Salles Boyoli in an interview with Entrepreneur en Español .

Even, the lawyer points out, Mexican law establishes that these tests must be borne by the employer (that is, the boss pays them).

It is a different situation than in other countries. For example, in Europe and the United States there is already talk of a kind of COVID-19 passport to be able to return to the office or from one country to another.

Article 475 Bis of the Federal Labor Law in its second paragraph says: “It is the obligation of the workers to observe the preventive safety and hygiene measures established by the regulations and official standards issued by the competent authorities, as well as those indicated by the employers. for the prevention of occupational hazards ”.

"This implies that the employer has the power to require the worker in accordance with the law to take actions that ensure the health of the rest of the workplace and this implies contagious diseases," says García Saucedo.

But wait a minute. Isn't it a violation of my labor rights?

Ideally, current legislation clearly speaks of vaccine-related layoffs, but that is not the case.

Article 47 of the Federal Labor Law mentions the causes of termination of the employment relationship without responsibility of the employer. The fraction that could apply would be 12 since it says:

"If the worker refuses to adopt preventive measures or follow the procedures indicated to avoid accidents or illnesses."

"Could we fall into discrimination? Yes. We have the right to profess the ideology that we want, but that is never above the common good and in this case it is to prevent the spread of a contagious, potentially fatal disease and, even more, that it is about seeking a gradual return to economic activities ", remarks the managing partner of García Velázquez Abogados" From my point of view, employers can request vaccination tests. Yes, they can face probable complaints, complaints and infractions, but they are winnable because they would be ensuring a greater human right, which is the universal faculty to health ”.

For Salles Boyoli it all comes down to a matter of terminology: The law does not say vaccine as such .

"Ideally, the legislation would expressly mention the word vaccine, but the Federal Labor Law nowhere uses it in the more than a thousand articles it has."

However, the lawyer points out, when there is an issue that is not clear in Mexican law, what has to be done is for the Judiciary to resolve the controversies. It should not be surprising that in a few months or in a few weeks a case of this nature reaches the judiciary through amparo trials and this instance has to illuminate this space that is not very clear.

“If today someone thinks that demanding the vaccine violates their labor rights, they would have to go to the corresponding authorities so that they can interpret the norm and clarify this gap. When five similar cases are resolved under this assumption the Executive Power, then yes, what is known as jurisprudence is created, a norm that already obliges everyone ”.

If an employer tells an employee 'To come to work you need to take a test' and he refuses, there he does have the right to fire the worker for disobedience to a mandatory rule in the labor relationship, says Salles Boyoli.

Is there any distinction in this regard if it is a government company or a private one?

Although labor standards apply to everyone, it is important to distinguish that workers in Mexico are governed under two very large sections of Article 123 of the Constitution: Section A, which talks about private companies (and some parastatals), Section B, which speaks of Government companies (known as the Federal Law of Workers at the Service of the State). However, this is a much shorter law and indicates that in the absence of it, section A will be considered in a complementary manner.

"In this particular case there is no difference," says Sales Boyoli.

To make it clear again: No boss in Mexico, whether of a private or state company, can fire you if you refuse to be vaccinated, but they can do so if you refuse to present proof that indicates that you are free of the virus.

What if I go to work sick and get 'caught'?

Although it is true that you cannot be forced to vaccinate, you also have to consider what Article 135 of the Federal Labor Law says in its first section:

"Workers are prohibited from executing any act that could endanger their own safety, that of their co-workers or that of third parties, as well as that of the establishments or places where the work is carried out."

"It is also true that the employer has the obligation to preserve health in the workplace," García Saucedo remarks.

That is, a worker who is sick with a contagious disease such as COVID-19, could not go to the office, but could continue working from home if possible. However, if you deliberately go to the workplace sick knowing it, you CAN be fired for putting your co-workers at risk .

Not only that, going to work sick knowing that you are a source of infection is illegal . In the Penal Code there is a foreseen crime called Danger of Contagion that occurs when a person knows that they have a contagious disease deliberately takes actions to make others sick. 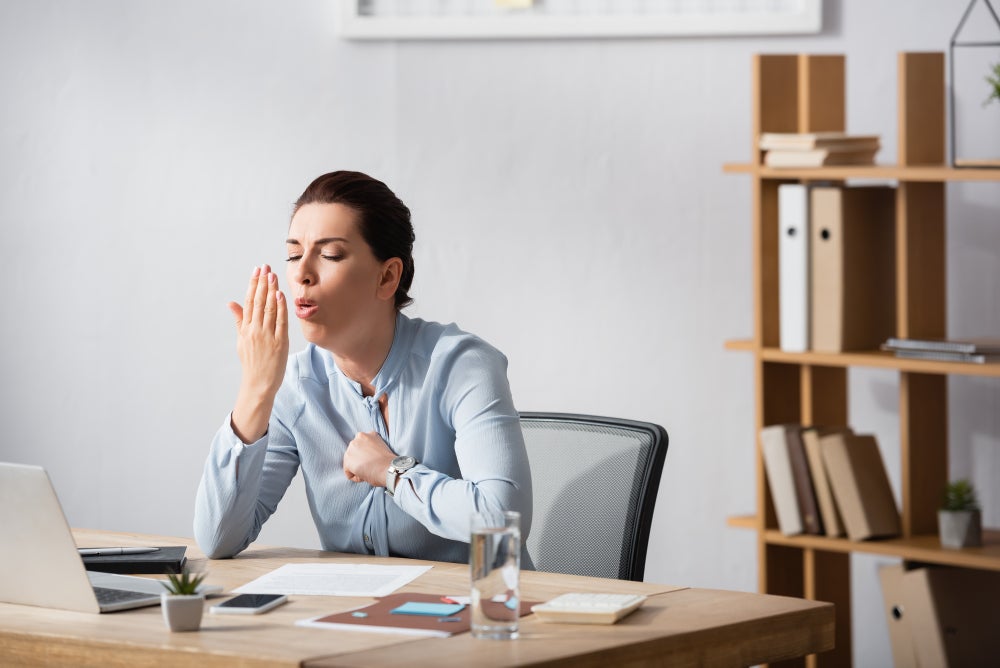 Going sick to work knowing that you are a source of infection is illegal / Image: Depositphotos.com

What can you do with your team?

Let us remember that, however highly recommended and necessary it may be, vaccination is voluntary . Sure, it is a topic that lends itself to debate so you should discuss with your team about the measures you will take in your business. In this way, you will allow your employees to make an informed decision.

What to do if they do not get vaccinated or do not want to present their proof?

If there are employees who have not been vaccinated, but plan to do so, find out what has stopped them so you can help them properly. It can be a religious or health motivation (maybe they have immunodeficiency for other medical reasons). If they are valid reasons, find out how to support them. You always have the option of allowing them to continue working at home.

“The employer, for the benefit of the worker, can do whatever it takes and give incentives for people to get vaccinated, it doesn't hurt. You can give bonuses, vacation days, salary incentives, etc. " Sales Boyoli points out.

If despite all this, the employee refuses to present proof that they are free of the virus in order to return to the office, you can terminate the employment relationship for the good of your team.

As Sales Boyoli points out: "An employer can fire a worker when he commits acts of disobedience to hired work."

Why Authenticity Matters in New Leadership

The great resignation: the revolution of the employees in search of labor flexibility