Despite the challenge of opening their doors during a pandemic, this sister-owned outpost is thriving in the Bay Area.

By Ryan Droste November 3, 2021
Opinions expressed by Entrepreneur contributors are their own.

Jeronica Macey and Be'Anka Ashaolu had the wheels in motion for their new coffee shop in San Jose when the pandemic hit hard in early 2020. Despite the obvious hurdles this created, the two sisters were able to open their doors that September and thrive as the local community rallied to support them.

Driven by a lifelong love of coffee instilled early on by their great-grandmother, as well as their core values of being kind, inspired, accountable, trustworthy and customer-centric, Nirvana Soul Coffee has become a must-try destination in the Bay Area.

"For as long as we can remember, we have dreamed of creating a space that feeds our souls and makes people happy," the two sisters state on the shop's website. Not only has that dream become a reality, but they continue to grow, having opened a roastery in addition to their storefront.

Entrepreneur recently spoke with Macey and Ashaolu about the brief history of their family business and what the future holds.

Tell us about where the idea for Nirvana Soul Coffee originated.

Ashaolu: We grew up drinking coffee at a very young age with our great-grandmother. She just passed a couple years ago, just shy of 101. But we spent a lot of time growing up with her. She had coffee every day to start her morning, and then when she would be almost done with it, she would give it to me, my brother and my sister. We'd split it three ways and add water and a bunch of sugar to it, and that was our time to really bond and connect with her at the very start of the day. 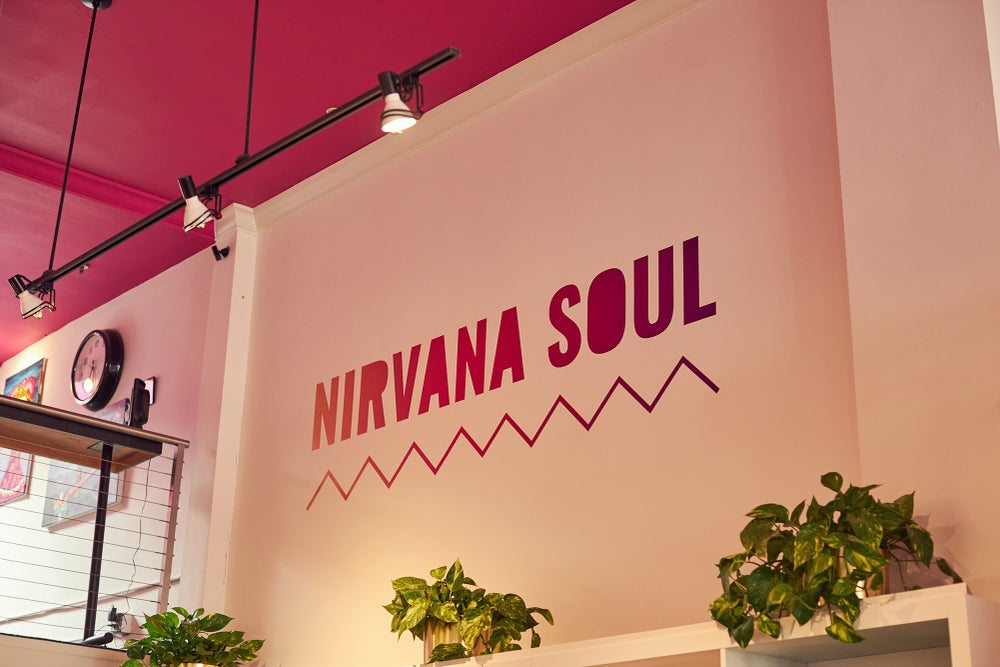 My sister went on to start her career in coffee, just right out of high school at a [Peet's] coffee shop here, not too far from our shop today. And so obviously, there was some connectivity there in terms of the love of coffee we'd established when we were younger, to her love of coffee once she started working at Peet's.

Can you talk more about how working at Peet's informed your path to launching Nirvana Soul?

Ashaolu: Peet's has an awesome training program. You learn all about coffee, and pretty early on in that experience, she was like, 'I want to have my own place like this somewhere where people can come where they feel like they belong." It's almost like a place for misfits, you know? She wanted to create her own space that would be that welcoming, inclusive and a place where people could kind of find a home.

What were the earliest and highest hurdles for starting your business?

Ashaolu: The biggest hurdle for us was financial. Jeronica had the name for 10 years, and about three and a half years ago, she moved back home from Sacramento to San Jose when we decided we were really going to do this together. We had zero dollars and we don't come from money, so our friends and family also had zero dollars. But we pitched them our dream and just told them, this is what we want to do. And after that, we had our pitch party with our friends and family. We went back to our apartment and a friend of ours came over and gave us $500. And we're like, "OK, now that we're really in it, we really have to make this happen." So we just sort of went online and Googled our way through. We tried to figure out how much money we would need to make this happen. How can we get an SBA loan? That's something I'm sure we had just heard around or on TV and looked into what resources might exist. And eventually we just started piecing it together bit by bit until we had enough for our 20% equity injection, which is all new language we had to learn.

Your business opened its doors on September 26, 2020. Tell us what it was like opening during a pandemic.

Ashaolu: That was wild. It was six months into the pandemic. For a lot of people it was the first time they had even left their house. So we had a three-hour line down the block outside our shop. We were only allowing six people in at a time, and we were understaffed because we didn't want to overhire and have to let people go. This community just showed up for us in a way that was unbelievable. We had no idea that we had that sort of reach. We had started our blog and our social channels about a year and a half earlier. And so we've been telling our story up until that point. But even so, once we opened the doors, it was beyond what any of us had dreamed about. So we've been fortunate, which is a weird word to use during a pandemic. But we kind of have been because people have been so supportive of us, and they haven't stopped.

Was there any second-guessing as you got your sea legs?

Ashaolu: We had decided early on that we weren't going to quit no matter what. Because for us, it was like Jeronica had this 20-year dream, and we didn't want to get to the end of our lives and be old ladies in rocking chairs being like, "Why didn't we just try?" We figured at some point, it would just work out. If we had any doubt, we closed our SBA loan as the pandemic was really kicking off, and so we were like, "Hmm, this would be the time to jump ship." But  we were already in so deep that we were like, "This probably won't be that bad. The pandemic will probably be over. Maybe it lasts another couple weeks or so. And then we'll be fine." Little did we know, obviously. So we're like, let's keep going. We can't have a crazier year than that, right?

What has been the most rewarding part of owning your own business and overseing its growth?

Ashaolu: The most rewarding thing for me, and Jeronica would probably echo this, is that we're doing it as a family. So it's not just me and my sister, it's also me and my husband; we're really all three in this together. And so even on our worst days, if someone's feeling down, the other person will lift us up and vice versa. So that makes me the happiest. And maybe I would add the feelings that our customers have when they come through the doors. Locals, people of color, women, kids — how they feel and the emotion that they express to us is unlike anything I've ever seen before. They feel like this belongs to them and that we built this together. There's no better feeling than that.

Related: How this Founder and 'Shark Tank' Veteran is Fighting to Create a More Inclusive Coffee Category

What do you think the future of small business looks like in the United States?

Ashaolu: We're pretty optimistic.The future is bright for small businesses that put their customer's experience first. Retail has to be experiential; it has to be about people. No longer is it as transactional as it used to be, and I think that small businesses have to figure out how they're going to survive in this new reality. So it doesn't have to be bleak. I think there's still a lot of opportunity. It's just how do you work with the community that you exist in?

Macey: Being in a pandemic, I got to see, especially when we opened up, how many people came to visit us. So that led me to believe that people want places to go; not everyone's here to shop online. And so that gives me hope that the future can be bright. But to piggyback on what Be'Anka said, it does have to be an experience, you know? It can't be an in and out situation. People have to feel important, and they have to feel like they're coming to the right place. A community situation is what's going to help all small businesses.

Ryan Droste is a Digital Editor with Entrepreneur and has written for several publications over the years, with bylines at Sports Illustrated, CBS Interactive, The Inquisitr, ComicBook.com, PopCulture.com, Sportskeeda and many others.